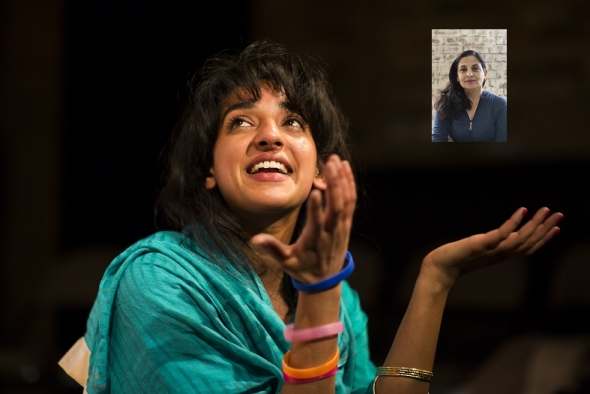 ONE OF Britain’s most successful artistic theatre directors and well-established actors has expressed her intense disappointment and frustration that her latest play does not have a producing partner.

Sudha Bhuchar, the founder and co-artistic director of iconic British Asian theatre company Tamasha, said when she approached other theatre companies to help her produce, “My Name is…”, she got flatly rejected.

She told www.asianculturevulture.com: “Everybody turned this play down. They wanted to see final drafts or they told me ‘we have something like this in development’.

Bhuchar has developed Tamasha into one of Britain’s most innovative and culturally dynamic theatre companies for over 25 years, and has a string of successes both as a writer and an artistic director. She has also been instrumental in launching the careers of such stars as Parminder Nagra, Jimi Mistry and Raza Jaffrey through Tamasha.

She opined: “Our careers are incremental – do our reputations count (for anything?)”

She feels the theatre industry overlooks her achievements and track record and does not view her as an experienced and very skilled and knowledgeable theatre auteur – who can write, produce, manage shows and is a creative force in her own right.

“It happens to all the Asian artists I know, we’re seen as beginners. Nobody will say this person has a track record, let’s invest in her.”

She said she can only remember one occasion in her long career when someone contacted her with a possible commission but it fell through because of practical issues.

The play, “My Name is…” deals with the real life story of 12-year-old Scottish schoolgirl Molly/Misbah Campbell, who was at the heart of what the mass media portrayed as a tug of love between her Pakistani Muslim father and her Scottish mother in 2006.

The emotional truth – constructed via taped separate conversations between schoolgirl Molly/Misbah, mother Louise and father Sajad with Bhuchar and delivered verbatim by the actors in the play – is far more complex.

The play has had much media attention with a spot on today’s (May 6) “Women’s Hour” on Radio 4 and a large feature in “The Guardian” in print last Monday (April 28) and many interviews across the British Asian media.

Bhuchar told www.asianculturevulture.com, it was “a small play with a big canvas” and goes to the heart of what she also calls “lived multiculturalism”.

The current production is being staged solely by Tamahsa at the Arcola Theatre in Dalston and will transfer to Glasgow for just three nights from May 29.

“Tamasha has done ‘My Name is…’ without any partners. We have a wonderful tour but no co-producing partners.

“We struggled to find a Scottish partner, we couldn’t secure one. We hope it will have a future life. I would like it to go on tour but it looks like I will have to make it happen myself.”

The cast are Scottish and Bhuchar said they felt the play with its cultural cross-currents was even more relevant to them.

“We wanted to take it to Scotland first. It’s much worse in Scotland. The artists really feel on their own.”

Her list of stage appearances is long and she will shortly be seen in a new play called “Khandan” by Gurpreet Kaur Bhatti in Birmingham and London.

It isn’t the first time that Asian artists have complained about their track record or previous achievements being ignored or overlooked. Meera Syal has spoken about her own insecurity as an actor despite being a veteran of stage and screen.

It is ironic that nobody could see the merit of “My Name is…” before Tamasha went ahead and staged it and the story emerges as a think-tank published a report today (May 6) predicting that a third of the country’s population will have an ethnic minority background by 2050.

Bhuchar’s comments also come just a month or so after Susan Elkin, education and training editor of trade paper, The Stage, said most ethnic minority male students were not up to the job and were simply on courses to fill quotas. The furious reaction from the Asian acting fraternity was covered in Amit Roy’s column in “Eastern Eye“.