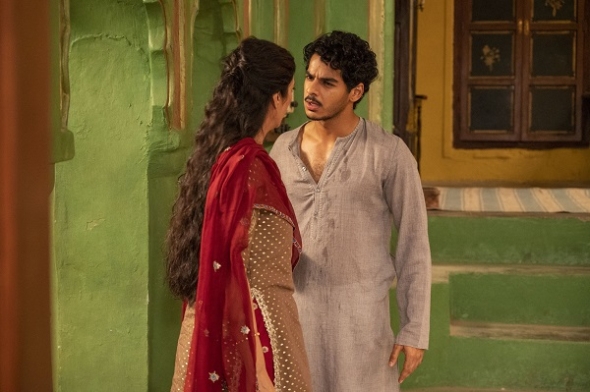 If you have seen episode 5, here’s a recap, if you haven’t, don’t read this, there are major plot spoilers…

BEEN left a little indifferent – especially over the pacing and general plotlines? This episode will put you in front of your telly for tomorrow’s (August 24) concluding episode, if nothing else has…

Of the momentous events, ˙Maan˙ (Ishaan Khatter) has managed to stab his best friend – ˙Firoz Ali Khan˙ (Shubham Saraf); ˙Haresh Khanna˙ (Namit Das) has lost ground to ˙Amit Chatterji˙ (Mikhail Sen) and ˙Kabir Durrani˙ (Danesh Razvi) in the husband stakes over our heroine ˙Lata Mehra˙ (Tanya Maniktala). Kabir is moping around, trying to engineer a meeting to profess his love…

It is quite seasonal too with Christmas lunches’ and New Year parties.

˙Saeeda Bai (Tabu), the courtesan, has been cooling towards her lover Maan, following his return to Bramhpur (the fictional small town in which the series is set) from the countryside – and he fears she is about to give him the push; and in this, he has already wrongly imagined that his dear friend, the young Nawab, Firoz Ali Khan (Shubham Saraf), is manoeuvring.

How wrong! We know that it is ˙Tasneem˙ (Joyeeta Dutta), Firoz has eyes for – but there is a startling revelation that Maan does not hear – Tasneem is his sister and it lies at the heart of Saeeda’s growing unease. He, like her old Qur’an teacher (˙Rasheed˙) has been sending letters) to her.

Firoz had been called to Saeeda’s residence to be told this by her and just as its implications are dawning on the young Nawab – Maan returns in a bitter mood, having been told by Saeeda herself that she does not wish to see him, earlier that evening.

Seeing Firoz’s walking stick, Maan believes Saeeda is entertaining him and has hidden him from sight. There is a tussle between Saeeda and Maan, and a knife is drawn. Firoz goes to intervene but his friend, consumed by jealousy and rage, makes clean contact with the knife.

Earlier, it is Lata and her family that occupy screen time and much comes out of a Christmas lunch hosted by Haresh for the Mehra family.

He is a genial host and has gone to some length and care to impress – the flower arrangements, the vegetable bake for Lata’s mother (called ˙Ma˙ much of the time), presumably because much of the menu is non-veg.

Ma (Mahira Kakkar) is so thrilled by Haresh’s “thoughtfulness” (the veggie bake) – she invites him to go to the New Year’s Day Test Match in Calcutta (Kolkata) with Arun, whose company has tickets and also says dinner is on the agenda.

On the way back in the car, Arun is scathing about Haresh – and talks up his brother-in-law’s (poet Amit) chances with Lata.

Two pivotal scenes emerge out of all this – first Amit and Kabir’s paths cross just outside the Mehra home. Kabir is hoping to see Lata and persuade her, they have a future together – while Amit is there to join his sister and Arun.

Kabir says he admires Amit’s work and invites him to speak at Bramhpur University about his new poetry collection – cue for them to share they are both in love with a student there. We know it is one and the same, but their conversation does not go that far.

Haresh then arrives expecting to go to the Test Match, but Arun emerges from the apartment with Meenakshi and them arguing – and says the invitation has been rescinded – no tickets are left, and he has made plans for later anyway.

The three suitors are together briefly, and much to Kabir’s annoyance Haresh invites himself to see Lata. Another suitor to Lata, he recoils silently.

Inside, Haresh tells Lata he needs to know what his prospects are – she says, he is putting her on the spot and that he needs to give her a bit more time.

Casually, she calls him “mean” for expecting her to drop everything and go out with him the next day. Haresh takes enormous umbrage – and huffs off. Their possible union seems far off and Ma is shaken, as is Lata.

She then meets Amit at a New Year’s Eve party and they slope off to enjoy the Calcutta fireworks together and sparks fly.

Elsewhere, the smaller sub-plots are also moving to a swift conclusion – Rasheed (Vijay Varma), the Urdu/Qura’an teacher is losing his mind, lovesick over Tasneem. His father (Vijay Raaz), a modest landowner farmer, has disowned him after his son’s fomenting discord in the countryside among their peasant farmer workforce. He is a socialist and also standing in the forthcoming election.

The supporting cast beyond the central triumvirate of Khatter, Tabu and Maniktala, have all been excellent with Das perhaps the standout – and Kapoor, Shorey, Varma and Raaz have also enhanced the viewing experience. Sen and Razvi have also done much to maintain the romantic interests in the series. The trio have kept us guessing…

Who will Lata choose? Will Maan be convicted of murder or attempted murder? Will Kapoor senior be able to politically ride out the scandal now engulfing his son?

The final episode of ‘A Suitable Boy’ screens at 9pm tomorrow (Monday, August 24) on BBC One.

Read our series wrap as Tasha Mathur looks at what Lata’s choices mean for women today. It will be published just after the series concludes tomorrow (10pm) – check our social media to read

The series is expected to be on i-player for a year – https://www.bbc.co.uk/iplayer/live/bbcone