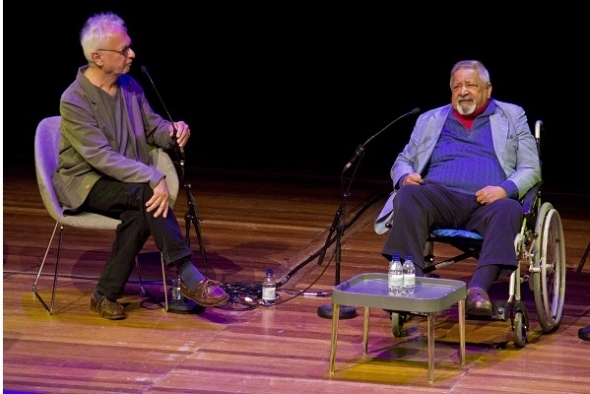 ONE OF THE WORLD’S best-known writers and the 2001 winner of the Nobel Prize for Literature, Sir Vidiadhar Surajprasad (better known as VS Naipaul and pictured right above) died aged 85, last night (August 11).

The literary world has been paying tribute this morning to a colossus of world literature.

Sir Vidia had a long and varied literary life and left his native Trinidad for Oxford University and the BBC Caribbean radio service before settling into a long life of letters and controversy.

He wrote novels, travelogues and essays and his breakthrough novel, ‘A House for Mr Biswas’ (1961) heralded the arrival of a very singular talent. He was knighted in 1989 and won one of the earliest Booker Prizes with ‘A Free State’ in 1971.

Among the auhtors and commentators paying tribute were Sir Salman Rushdie, and Paul Theroux; and Geordie Greig, the Mail on Sunday editor.

Rushdie on Twitter said: “We disagreed all our lives about politics, about literature and I feel as sad as if I just lost a beloved older brother. RIP Vidia.”

Theroux who had a long feud with VS, but patched up a few years ago and for all to see at the Jaipur Literature Festival in 2015, remarked: “He will go down as one of the greatest writers of our time.”

Greig had befriended Naipaul as a journalist interviewing the literary giant and from there they enjoyed a long and warm friendship.

In the MoS website today, Greig describes being by the bedside of VS Naipaul last night and reading Tennyson’s ‘Crossing The Bar’ as wife Nadira and adopted daughter Maleeha held his hand and the author slipped away, peacefully. He said that Sir Vidia cared deeply about his literary legacy and of that, there should be no doubt.

Farrukh Dhondy and VS Naipaul at the Jaipur Literature Festival 2015

He said Sir Vidia offered insights that no one else had on “a personal level, on a broader civilisational level”. He was never afraid to tell it like he saw it, Dhondy suggested.

Sir Vidia lived in the West Country with his second wife in England since establishing himself as grand old man of English letters.

It was a persona he may have enjoyed and revelled in – there was much speculation that Hanif Kureishi’s novel, ‘The Last Word’ (2014) which had a cantankerous but hugely successful author of Indian origin at the centre of it, was based on him.

Kureishi knew Sir Vidia well and in Jaipur, in 2015, was one of the authors paying tribute to ‘A House for Mr Biswas’ with Theroux, when Sir Vidia turned up unannounced.

In recent times, Sir Vidia had attended the Jaipur Literature Festival, both in Jaipur itself and the London edition (as part of The Alchemy Festival in 2015). See links below please.

In those sessions, he talked a lot about his relationship with India and was at pains to suggest he had been much misunderstood.

His first book on India ‘An Area of Darkness’ (1964) was seen as highly critical and disparaging of the country and Indians in general.

In Jaipur, he appeared to be more optimistic and forgiving about the land of his forefathers, and said Indian democracy was giving a voice to previously marginalised groups.

He was also on that occasion in Jaipur at the headline session, the epitome of charm and good grace and endeared himself to an audience which probably wasn’t expecting such warmth and politeness.

Farrukh Dhondy on Sir VS Naipaul

Alchemy 2015: Sir VS Naipaul on his own gloom, doom and spot of luck

Sir VS Naipaul: A writer at peace with his world…(Jaipur Literature Festival 2015)