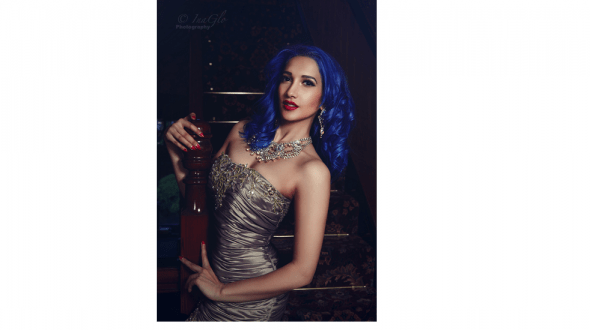 THINK of burlesque and most people would conjure the image of Dita Von Teese – the American performer who has made the genre famous and brought it into the mainstream.

She performs in Bath at the ‘Ministry of Burlesque’ at Komedia on Friday (March 28) and the show is the only one she will be staging in the UK, before she jets off to New York in May for the biggest Asian burlesque festival ever organised, “The Asian Burlesque Spectacular”.

Let’s get a few facts straight before you form on an unholy impression of Sukki Menon, as she really is – the Singapora refers to the country of her father’s origin. He is South Indian Singaporean, while her mother is white British.

Delicate, artfully feminine and personable, she’s not really the bosoms and hard attitude you might expect of burlesque, aka Dita Von Teese.

But don’t be too fooled by that, because beneath the soft exterior, she’s tough, combative and strident. And no doubt some of that feeds into her act, which she said has a “traditional Bollywood intonation” to it.

She doesn’t take her clothes off – or at least certainly not all of them, and is keen to suggest she’s not conventional burlesque in that regard.

“There isn’t any nudity (in my act),” she told www.asianculturevulture.com “I don’t want to name names but in America it’s very sexualised and nudity is involved.

“What I’ve done is brought it back to being about the art. I don’t see it as stripping, I see it as an art form and in a lot of my routines there’s no stripping.”

But to qualify as burlesque, there does need to be some element of tease and seduction and she does remove some of her garments, she told www.asianculturevulture.com.

“On the face it, it’s burlesque but it’s really what I’d like to call ‘neo-burlesque’. Garments are removed – gloves, corset, stockings but I don’t go any further than that,” she explained.

Her act too has very distinct cultural references and she wears her culture on her sleeve – quite literally.

“In every outfit, every corset, woven into it is a sari, so I am literally wearing my culture and my heart on my sleeve when I perform.

She has a lot to bare (if you’ll excuse the pun) – her family are culturally very conservative and well-to-do. Both her parents practise medicine and her family are in similar fields.

“My parents and I have a very close relationship now – however they still disapprove of what I do.”

For Singapora, the journey has been long and arduous and perhaps reflects a wider and more common experience some (Asian) women endure when they want to do something out of the ordinary or that defies gender stereotyping.

Of course ‘stripping’ or ‘fancy stripping’ – as critics of burlesque might put it – does not fall into that latter category – but we will come to that.

“My parents and my family are very traditional,” said Singapora. “More so on my Singaporean side. So, I had never contemplated or considered anything like this (burlesque), I had just about got away with dying my hair – they thought it was a fashion fad – and I think had they known at the time I was even contemplating this, fireworks would have gone off.”

They did – but not quite then. It was about two years ago that she made her burlesque debut close to her home in Cheshire.

She had grown up there, but also in Singapore, spending holidays with her IndoSingaporean side of the family and had made friends and had grown to love it.

“I identify as Singaporean in terms of my upbringing.

“As a child, I felt like I wasn’t part of either community, I felt out of place – I was too white to be Singaporean and too brown to be British.”

What was her solution then?

“Growing up I’d found my identity in vintage fashion – it was a scene where it didn’t matter (about your ethnicity), it was all about a look, an alternative look.

“Through that I’d heard about American burlesque stars – they always wore vintage fashion and, I’d been trained in classical ballet from a young age and so with my dance background, it was a perfect marriage.”

But the B.SC Geography graduate was already nicely set up, moving into IT, she had a job with the British Olympic cycling team in their computer service and support division.

She took the plunge while still working, adding an Asian twist and performing with a friend.

“I blagged my way into performing in a club, pretending to be a professional burlesque dancer and I did my first ever dance after learning burleseque in seven days from watching youtube videos.”

“It was awful, it went badly – there were all sorts of wardrobe malfunctions. We were the last act but people found it funny and all applauded at the end because they had come with us on a journey and they knew we hadn’t done it before.”

They got asked back and Singapora felt certain she had found her calling.

“It became evident that I should do this as a solo career and I decided to do more solo shows, and within a space of time, I quit my day job.”

In April 2012, she started to devote herself full-time to burlesque, performing in clubs and getting her name around the circuit.

Her parents still didn’t know and but for a short time in hospital last year, her secret would have remained so for a bit longer.

“I was ill, and my fiancé texted my parents saying ‘Sukki Singapora is fine’; he did it without realising what he was writing.

“My mum thought who is this… and googled me. All the images came up.”

She and her fiancé (who first booked her debut in the club) plan to move out to Singapore – where she already has something of a devoted following (more than 10,000 likes on her facebook page).

She has become a role model and an icon for women (and some men) who want to break the yoke of repression in Singapore – but there are massive obstacles.

For a start, burlesque is a grey area, legally.

She explained: “Burlesque lessons have become popular there in the last three years but no item of clothing is ever removed. Most don ‘Moulin Rouge’ or  ‘Chicago’ style costumes and it’s a burlesque themed dance .”

She has set up a support group – in response to the many letters she gets about being an inspiration and a trailblazer in a largely conservative country. ‘Esquire’ Singapore has already featured her in its “Women We Love” section.

“I have set up the Singapore Burlesque Society to protect women in my situation – who want to get into the arts or specifically burlesque, but are afraid to do so.

“There are brave Singaporean women and men who want to do Boylesque. I want to support them. I feel like I need to put myself into the fight to win the fight.”

To this end, she is also a campaigner for gay rights in Singapore, and wants to put burlesque on a surer legal footing – when she performed there (to a group of women) to the outside world it was a yoga class.

“I am hell-bent on changing the experiences of younger women who have an incredible talent and cannot express it – for whatever reason and drawing from my own experiences, I  feel women deserve to have a choice. I stand for freedom of expression and choice.”

That struggle and strife is incorporated into her act, and she insists that burlesque is really aimed at women and is not performed primarily for the titillation of men – but if that happens, it’s an acceptable by-product of something more important and larger, she argued.

“It would be easier to do traditional burlesque or just stop personally, because it might be easier for me – but other women are relying on me and watching my journey and what chance do they have, if I stop?”

In response to an email question about burlesque conforming to stereotypes and reinforcing the idea that women are no more than a decoration, she countered: “More often than not 80 per cent of my audience are female. Burlesque is not an art form designed to placate or satisfy men, in fact it is an art purely created to celebrate the sensuality and talent of strong women.