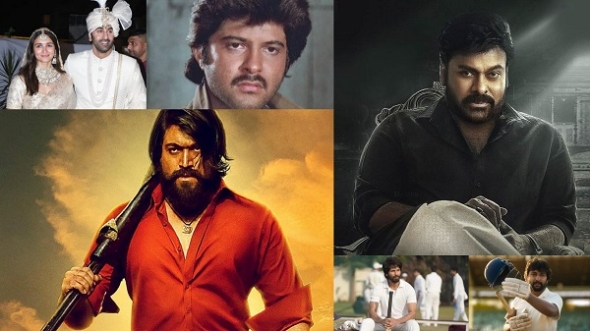 As ‘KGF: Chapter 2’ makes inroads into Bollywood turf, just like other recent South Indian films, does Bollywood and popular Hindi cinema need to raise its game…

HELLO UK folks, does it seem like a long month…

It has been weeks since the Alia Bhatt-Ranbir Kapoor wedding but the Indian media’s fixation with the event continues unabated.

The duo tied the knot in Mumbai on April 14; only close friends and family were invited. For almost a month, the media closely watched and documented the couple’s every move. The most recent article speaks about how Kapoor introduced Bhatt to his family after the varmala ceremony.

The marriage has been dominating headlines and making news even two weeks later is due to the fact that it’s all about Bollywood and two of its most popular byproducts – Kapoor and Bhatt.

It goes without saying that Bollywood enjoys massive popularity in India, and people are obsessed with the film industry and everything remotely associated with it. But now, it seems, Bollywood is on a shaky ground. At least that’s the talk of town.

The failure of Bollywood to deliver hits as well as the massive successes of South Indian film in traditional Bollywood territories has been a wake-up call of sorts for Mumbai’s movie industry.

The latest south Indian movie, ‘KGF: Chapter 2’, (with KGF standing for Kolar Gold Fields) has been roaring at the box office, so far collecting £100 million all over the world. The figure speak for itself.

In 2019, Bollywood’s domestic box office collection stood at £520m, whereas for South films it was £400m. According to a report by the Federation of Indian Chambers of Commerce & Industry (FICCI) and consulting firm Ernst & Young (EY), the domestic revenue for South Indian films for 2021 was £240m, while Bollywood made only £80m. The report goes on to say that South Indian films will do better than Bollywood movies in 2022.

Shahid Kapoor starrer ‘Jersey’, a remake of the National Award-winning Telugu film of the same name staring the actor Nani hit theatres on April 22; its release was rescheduled to avoid a clash with ‘KGF: Chapter 2’. Despite receiving acclaim for Kapoor’s performance, the film tanked at the box office. Recently, Ram Gopal Verma spoke against the idea of remaking south Indian movies into Hindi; several South remakes are in the pipeline in Bollywood.

According to the maverick director/producer South Indian filmmakers are unlikely to sell remake rights of their movies to Bollywood because dubbed versions of movies, such as ‘RRR’, ‘Pushpa’ and ‘KGF: Chapter 2’ are all doing well.

He also pointed out that if the original Telugu version of ‘Jersey’ had been dubbed, it would have cost only £10,000 and not £10m, which was the sum to remake it in Hindi.

There have been noises from within Bollywood itself about the rise of South cinema. When asked if Bollywood was feeling threatened by South films, Bollywood star Ajay Devgn said that the same thing was said about Hollywood cinema in India a few years back but nothing changed.

Well-known actor Nawazuddin Siddiqui called the success of South films on Bollywood turf (North India basically) a “phase”, while Anil Kapoor, who began his career with the Telugu film ‘Vamsa Vruksham’ also spoke about a “phase”. He said South movies have given good stories and films, and that “this phase, was, is and will go on”.

Bollywood legend Sanjay Dutt, who features in ‘KGF: Chapter 2’ credited the success of South films to the creation of “larger than life heroes”; he asked Bollywood why it had forgotten “heroism”.

In fact, Salman Khan, who plays an extended cameo in actor Chiranjeevi’s Telugu political thriller, ‘Godfather’, has also spoken about the need for ‘heroism’ in Bollywood in the context of South cinema.

He said that “heroism works and has a connection, which is important for cinemagoers”.

With a slate of high octane-big budget-star studded South movies expected to hit theatres in the coming months as well as several that are in the planning and discussion stages, the battle for Bollywood is only going to get tougher in the days ahead. The battle between south and Bollywood films is here to stay.