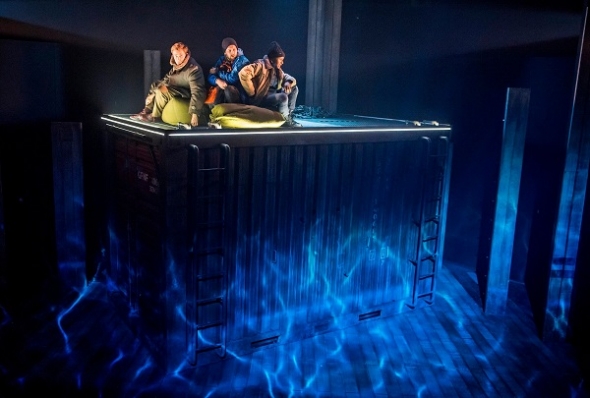 FRANTIC ASSEMBLY is a movement based company that make beautiful work – their current show, ‘The Unreturning’ has been touring the UK and you can catch it at the Oxford Playhouse this week.

The company which has been going since 1994 is known for its physical theatre and movement approach – and among their most famous work includes, ‘The Curious Incident Of The Dog In The Night-Time’ (with the National Theatre) currently in the West End, London until April 27.

‘The Unreturning’ (a co-production with the Theatre Royal Plymouth), mixes text and movement and focuses on three young men caught up in three different wars over a hundred years and who all want to return ‘home’ to Scarborough.

The first man is ‘Nat’ (Jonnie Riordon) from 2026 he is a refugee from Britain which seems to be a divided country. The second is ‘Frankie’ (Joe Layton) who’s served in Iraq in 2013 and the third person is ‘George’ (Jared Garfield) a soldier from the First World War in 1918.

The set is a freight container box with several doors, becomes a truck, a home, a hideaway, and light projects onto the floor which can be sea or land.

Written by Anna Jordan, the text is poetic and fluid and the performers are all young men who have been through the company’s Ignite programme which takes young men aged 16- 20 and trains them in movement and physical theatre.

In this show, all the parts are played by four male actors and they also double up as different characters.

The play directed by Neil Bettles is mesmerising and hypnotic and is complemented by the sound design of Pete Malkin and brooding lighting design created by Zoe Spurr.

The three stories of young men going to war and wanting to come home are performed in parallel and are wrenching in places.

Nat has taken refuge in Norway and wants to get back to England, and he’s looking for his brother, Finn (Kieton Saunders-Browne); ironically Britain seems to have become a doss house in a post Brexit dystopia and people are leaving on boats to seek work and livelihoods elsewhere.

It is also a country that appears to have be taken over by militias (This section is a bit unclear as gazing into a futuristic crystal ball is a bit tricky).

Frankie wants a hero’s welcome “fanfares and parades and brass bands” and the warmth of his mother’s love; however, he’s has committed a dreadful deed and it has gone viral while all George craves is to drink tea in a china cup and see his wife, ‘Rose’. But he’s suffering from post-traumatic stress disorder and intimacy is difficult.

You might get a bit lost in the movement but best to let it wash all over you.

‘The Unreturning’ shows us the repetitive and futile nature of war and the feelings of the young men sent to fight for Queen and Country and what coming home really means!
ACV rating: **** (out of five)

Privacy & Cookies: This site uses cookies. By continuing to use this website, you agree to their use.
To find out more, including how to control cookies, see here: Cookie Policy
← ‘Sweat’: US rust belt goes under spotlight and diversity and immigration also get dramatic treatment (review)
Bird Bites: ‘Until the Lions’, Aashni bridal and beauty showcase, Freddie Mercury’s hidden Parsi roots, and ‘Approaching Empty’ play by Ishy Din →