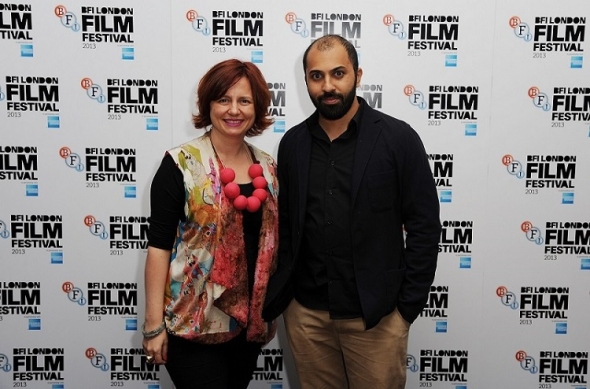 Shown in the latter part of the festival (over its last two days), the film represents a new wave (if we can call it that) of Indian independent cinema which should be changing the wider film-going public’s idea of ‘Indian films’.

There were several others that also featured at this year’s festival ( #LFF): ‘Siddharth’; ‘Sniffer’; ‘Vara: A Blessing’; and ‘Jeevan Smriti’, as well as ‘Fandry’ and an old time classic, ‘Kalpana’. (Reviews below).

Whether these films will enjoy a UK release remains to be seen.

‘The Lunchbox’ is different in that it already has a UK distribution deal with Artificial Eye, though at the time of this being written, the release date remained unconfirmed.

This deal represents a huge step forward and a wider marketing opportunity in opening the UK public’s eyes to Indian films that are not just all song and dance or simply star vehicles.

For a couple of years now, Indian independent cinema has been represented well at the world’s biggest film festival, Cannes.

‘The Lunchbox’ showed there earlier this year and picked up many plaudits – winning an audience award from a French railway group, which liked its real life depictions of suburban travel in Mumbai (it looked a hell of a lot cleaner in the film!).

‘THE LUNCHBOX‘ film is a gentle, romantic number that has good characters at the heart of it, with a tale to tell, both individually and collectively.

Batra assembles his cast like a Michelin chef and puts them to work at a dish which even on paper promises much – and does deliver.

Whether it’s disgruntled and increasingly lonely Ila (Nimrat Kaur), whose only antidote to the boredom and drudgery of her days is to make a lunchbox her husband will appreciate, to the eager, yet untested, government accountant, Shaikh (Nawazuddin Siddiqui), the film articulates a sense of longing and belonging.

In between them is the rather imperious and – at the beginning of the film – aloof Sajaan (Irrfan Khan), whose character is transformed by encounters with the other two.

From the curmudgeonly colleague Shaikh has a hard time communicating with, to the unlikely target of Ila’s romantic overtures, through a series of notes and wrongly delivered lunchboxes, Batra’s own delicately balanced concoction has much to recommend it.

The backdrop of Mumbai is one that is also entirely credible and reminds anyone it is as much the city of hope (as well as despair), unlike perhaps any other in India. Rating(out of five): 3.5

‘SNIFFER’ is how Indians would describe a private investigator.

This one goes by the name of Anwar (Nawazuddin Siddiqui) and is not very good, really. In fact, he’s appalling.

He’s not very discreet and hardly able to resist a dig or two at the adulterous couples or illicit couplings that he is sent to detail – and confronts people without thinking about the task in hand.

It’s part comedy, part surreal fable and quite enjoyable, if these sorts of films work for you. Siddiqui is tremendous, inhabiting Anwar with all the charm of the loveable loser. His faithful companion is a dog, who like himself, enjoys rum and a good old yarn.

A series of faltering cases, a grumpy religious head of the housing block Anwar lives in, and an unusual disappearance, lead Anwar to take a journey, both physical and emotional.

There is a certain poetry in all this, in Buddhadeb Dasgupta’s direction, and the end is so beautiful it makes you want to see the film all over again.

It can be hard to see where it is going at times, but its surreal quality gives it charm and humour – more of that and it could have been something unique and thrilling (in an Indian context). Rating: 3.75

‘SIDDHARTH’ is such a harrowing tale in so many ways, to say you enjoyed it might seem quite perverse.

About child abduction in India, it offers no easy answers or solutions, but depicts the plight of one family, and in particular one man, Mahendra’s desperate bid to find his son, Siddharth.

Sent to a factory in Punjab from their Delhi home, Siddharth’s contracted temporary employment turns into a nightmare for his father, mother and sister; and the factory boss is none too impressed when Mahendra turns up on his doorstep, asking what has happened? He says the boy has ran away but there seems little cause or evidence to confirm this and so Mahendra’s search goes on.

Featured in the Journey section of the festival, it takes Mahendra to Mumbai, and another world. If adults struggle to survive there, just how will a 12 year old boy fare?It’s absorbing, sad, and quietly played with Rajesh Tailang as Mahendra and Tannishtha Chatterjee (star of ‘Brick Lane’) offering the dignity and humility of poor folks, amidst the corruption of India. But are they not compromised too, for sending Siddharth away?  Rating: 3 (Interview with director Richie Mehta, pre-screening, here http://asianculturevulture.com/portfolios/siddharth-tragedy-with-tantrums)

‘VARA: A BLESSING’ looks like an old world tale and there is no question director Khyentse Norbu, from Bhutan, (just how many directors are there from the tiny Himalayan kingdom state?), has an eye and talent.

The lush Sri Lankan landscape dovetailing as an unidentified (South ?) Indian rural village give this film an arty, indulgent feel and music from Nitin Sawhney adds atmosphere and tension. The dialogue is in English.

Shahana Goswami as Lila is a mesmerising screen presence and her beauty and generosity of spirit (in the film) are so luminous, that Norbu should have centred the whole film around her.

Instead, when her presence fades in the last third before its conclusion, the film loses something  – the men around Lila, less interesting or attractive (physically or not), confuse the issues. Lila is a ‘Devadasi’ – who have something of an ambiguous designation in India.

Dedicated to a temple or god, they are traditionally dancers and leaders in forms of worship, but they are, also in some instances, even now, prostitutes and women with no clearly ascribed role.

At a formal level, Hindu temples are forbidden to have them, yet the practice persists in some districts. There is an obvious conflict as the men both despise, and covet Lila, for very different reasons.

If it was more tightly controlled with a yet deeper focus on Lila’s story, this could have been something with real punch and panache.

Something of an admiring and adoring nod to Satyajit Ray’s ‘Charulata’, especially the first 11 minutes (apparently), and based on a short story by Sunil Gangopadhyay, ‘Vara: A Blessing’, should have taken a leaf from Ray’s notebook in letting Lila, like Charulata, dominate every frame of this film.

There is enough to make it watchable but it could have been so much more… Rating: 2.5