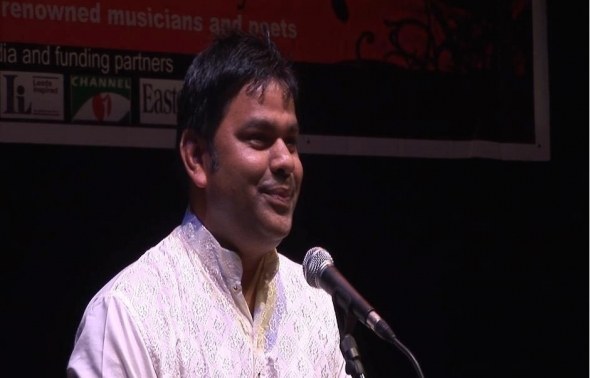 IT STARTED a little more than a year ago and as no more than an idea to combine poetry and classical music on the same bill.

On Saturday (September 14),  Saudha, Society of Poetry and Indian Music, celebrates just over a year in existence with their second major poetry and concert evening in Leeds.

Their first, in the same town, was a success and gave them the confidence to continue their unique offering, which has now developed into a platform for world poetry, alongside classical Indian music.

Now, some eight concerts and with a schools programme under their belt, they return with a two-day programme which shows their growing popularity and developing confidence.

Among those playing over the weekend are Shabaz Hussain on tabla and Kamalbir Nandra on violin,  while Sumana Basu performs ghazals, Dipanjan Guha plays sitar,  and cello player Gemma Irving is also on the bill.

“We were not sure in the beginning,” confessed Chandra Chakraborty to www.asianculturevulture.com . “But it seemed like a good idea, the people who tend to like classical music, also like poetry.”

An accomplished singer, she has performed internationally and is well known in India as a classical chanteuse, and is one of the two driving forces behind Saudha.

For the other, Saudha director, Ahmed Kaysher (pictured), a Bengali poet, it has borne out his own instincts to bring these two disciplines together.

He told ACV: “We thought it will attract the audiences for both art forms and thus we can create a new audience from a diverse background.”

And so it has proved, Saudha’s event in Leeds will bring together poets from different countries, languages and traditions – there are English, Bengali, Urdu, Persian and even Somali ones reading on the night with translations too.

“They are young poets in their 20s and it all helps to bring people together. They contacted us and wanted to work with us,” explained Chakraborty.

The evenings start with the poetry and it often opens up into debate and explores philosophy and aesthetics and looks to encourage a space for ideas and thought.

The poetry helps to set up the mood music for the evening – and it is important for Saudha to engage young people and introduce them to an art form they feel can be somewhat neglected.

For Chakraborty, Saudha is filling a definitive gap – that between the populist and the more broadly classical, where crowds are more difficult to attract.

“Bollywood concerts are always popular, but with classical music it is harder and young people do not come,” said Chakraborty.

“We would like to see our concerts attracting more and new diverse audiences from different cultures and the verses play a vital role in providing a spiritual remedy in this age of alienation,” said Kaysher, who has a penchant for deconstruction and the work of the 20th century French philosopher, Jacques Derrida.

Saudha’s concerts in Leeds are only £5 and the low price is designed to attract young people and others curious about the concept.

“This is to make it accessible. We have more of us now – we are very happy that the first trial was so successful and people who came for the first concert are coming back and everyone likes the quality – we never compromise on the quality. The musicians want to play with us – because the know we have high standards. Shabaz has performed internationally and so have I.”

Saudha relies heavily on ticket sales to stage these events, but its growing popularity has seen it receive further invitations and don’t be surprised it comes to a town near you.