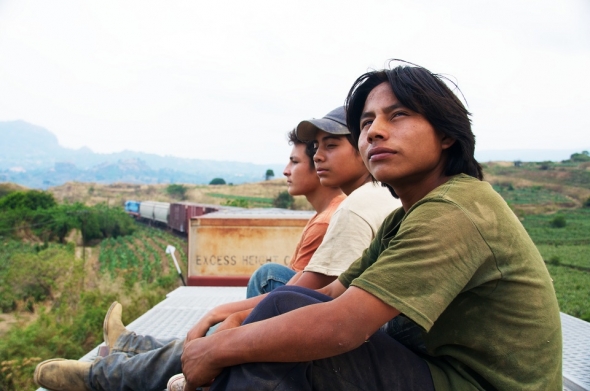 SPARE, unsentimental, and brutally direct – but also paradoxically majestic, because of these very particular qualities, director Diego Quemada-Diez’s “The Golden Dream” is a film not to be missed by those who yearn for a powerful ‘humanism’ in cinema.

It is then perhaps no surprise that Quemada-Diez was accorded the Satyajit Ray award last Friday (June 27) in a special presentation at the Curzon Cinema in Soho, London.

Last year when it was shown at the Cannes Film Festival in the upcoming and promising directors section, Un Uncertain Regard, they created a special jury award for “The Golden Dream” and it has won a clutch of accolades from around the world in addition.

If you are familiar with the works of Ray, you can see why “The Golden Dream” won the 18th edition of this award. It was set up in 1994 to mark the legacy of the great Indian filmmaker (the only Indian director to have been presented with an Oscar) and encourage filmmaking in his deeply empathetic and compassionate style. It was set up by Devika Bannerjee with Sir Richard Attenborough as its patron.

“The Golden Dream” has a very traditional heart and essence, and harks back to a time when all we had was characters, narrative and a strong desire to communicate, inform and stiumulate.

“All the migrants we hired are real migrants,” Quemade-Diez revealed in a Q&A with film journalist Ian Haydn Smith after the screening at the Curzon.

In some form or another, the 600 had helped him to make “The Golden Dream”.

Every single one is given a credit at the end, making it quite possibly one of the longest end credit lists in cinema history.

Quemada-Diaz, who grew up in Spain, did much research for the film and honed his filmmaking skills working for Ken Loach as a camera assistant and then in Mexico making documentaries.

Before that as a cinematographer, he worked with Alejandro Gonzalez Inarritu (first in “21 Grams”), Fernando Meireles, Tony Scott, Olive Stone and Spike Lee.

It was while working on the documentaries in Mexico he came to find out about the migrants who risk life and limb to get to
the US.

“The inspiration was Mexico, the culture was closer to mine,” he said explaining why he chose not to make a movie in the US, where he went to film school to “learn his craft” or Mexico, where he had come to be based.

“There was a taxi driver (whom he was making a documentary about) and he invited me home and he lived near the train tracks. I met these migrants there. Sometimes the story finds you; I started learning from them.”

The story in “The Golden Dream” is very simple: four teenagers set out from Guatemala with one overriding ambition – to make it into the US (the land, not just of milk and honey proverbially, but for these four – of snow and it is a sweet, recurring motif in the four young people’s dreams).

That this trip is perilous and potentially fatal, and beset with challenges (to some possibly, actually worse than death itself), is met with little reaction other than a shrug and a self-belief and conviction from the majority, they are going to get across the other side.

Quemada-Diez’s characters are then full of hope and longing and you cannot but feel and root for them.

There is a real poetry to all this – in two of the characters there is a very deep contrast that slowly lessens during the course of the film.

Played by non-professional actors and improvised to a degree, Quemada-Diez gets a scintillating range from his novices: from love and romance, to hate, anger and fury.

Juan is deeply suspicious of Chauk, who is from an indigenous tribe (Tzotzil) and they both vie keenly for Sara’s (Karen
Martinez) affections, even though she disguises herself as a young man (taping her breasts and taking hormone pills).

Quemada-Diez chooses not to subtitle Chauk’s dialogue but like the characters themselves we come to learn and like Chauk for his lack of artifice, his courage and uncomplicated ways.

He explained to Haydn Smith that he choose to start his migrant story in Guatemala, because he wanted the show the scale and challenge posed for children who needed to cross more than one country to get into the US.

He also said his late mother was friendly with missionaries who had gone out from Spain to Guatemala to preach “liberation theology”.

This was a popular form of Catholicism in the 1980s and 1990s, which emphasised the need for social reform, championed the poor and destitute and was critical of capitalism and the rich.

Inevitably, it came up against the establishment in many central and south American countries, and precipitated a backlash which many accuse the US and CIA of fostering and supporting.

Quemada-Diez said: “They (the missionaries) were my mother’s friends and a lot of them got killed and were working in Guatemala and there were stories about the CIA.”

In many ways, it is a difficult to film watch, the characters get under your skin –even Juan, who is at first a macho, brooding, racist, but later through experience learns the errors of his way.

Quemada-Diez said he wanted to make a film that has both the qualities and feel of a documentary but one that also possesses the soul of a narrative feature.

It does, and he has said that through the character of Chauk we should see the follies of a western materialist mindset against something more poetic and richly human.

The common form of Ttotzil greeting goes: “K’uxi elan avo’onton?” – ‘How is your heart?’, and it helps to form a connection between Chauk and Sara.

Few films in recent memory have such soul and force.

It’s an important film and one Quemada-Diez says should be used to affect a better outcome for those vulnerable young people whose only real ‘crime’ (if so conceived) is to want something better for themselves and their families.