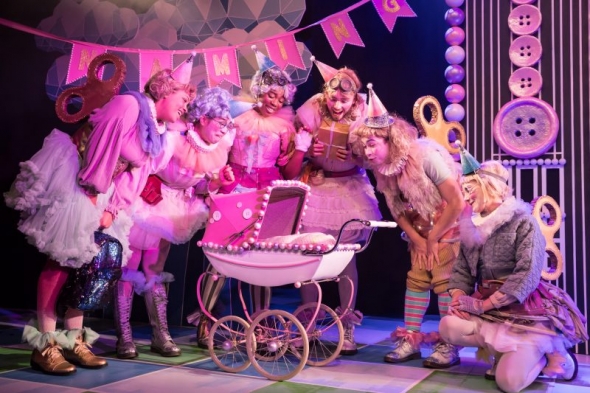 Our annual round-up (part I, at least) of the festive fare on offer…

You’ve guessed it, its panto season and here at asianculturevulture.com we are getting into the festive season too.

First off, it’s off to Lyric Hammersmith to check out their 10th anniversary panto, Dick Whittington featuring actor Luke Latchman as the lead.

“Pantomime,” he informed me, “is a very British tradition of theatre that involves the audience and something we enjoy at Christmas time.”

There have to be some key ingredients, such as a Dame (usually a man dressed as a woman), audience interaction, a goodie character and a baddie character as well as a love interest.

“There is always a simpleton type character, and in Dick Whittington it’s the title character, Dick is a bit Dippy,” he explained. “I am playing him as an 18-year- old who is just about old enough to move away from home and explore, but still quite naive and not very worldly wise.”

Latchman whose heritage is part Indian-Caribbean and part British, plays, Dick as a young Welsh lad, with a strong accent, who comes to London to make his fortune.

He finds himself robbed by the villainous rodents, henchmen of Queen Rat (Sarah-Louse Young), is befriended by Tom Cat (Keziah Joseph), and is soon standing for election as Mayor of London, meets a nice girl, Alice (Hollie Edwin) and generally gets into.a few scrapes along the way.

There is a lot of singing, dancing, fantastic sets, costumes and double entendres jokes on his name and other political jokes about Brexit and state of the economy.

Latchman who trained in musical theatre, at Arts Educational School, said that “People would enjoy the panto because it’s silly it’s fun, it’s loud, it’s raucous, it’s all encompassing and I honestly believe it’s for everyone!”

Meanwhile, over at Theatre Royal Stratford East, the 2018 panto is ‘Sleeping Beauty‘ which has been given a thoroughly modern makeover and features time travel.

Erika Posadas plays Sleeping Beauty, who is called Scarlett in this production, and  is a martial arts princess.

The actress who is from a Filipino background did a course in musical theatre, at the Musical Theatre Academy and this is her professional debut.

Josephine Melville appears as the wicked fairy, Mauditious Le Vicious. The show is directed by Matthew Xia an experienced director who has recently been appointed new artistic director at the Actors Touring Company. He also is a composer and DJ working under the name Excalibah.

“I’m thrilled about this team coming together to continue the much-loved tradition of delivering a panto that speaks to today’s world – something that’s entertaining and fun, but that’s also current and relevant.

The Guardian described this “as very much a panto for the present day, in which a Perrault fairytale is cross-fertilised with Doctor Who”.

What’s not to enjoy!

Over  at the Birmingham Hippodrome, the folks have offered up a star studded panto, Peter Pan, featuring Jimmy Osmond as the swashbuckling Captain Hook, and our own Meera Syal as a mermaid!

And if the show is as good as their press poem below, you are in for a treat!

“Pantomime is loud for a small pair of ears. Spectacular sights can sometimes cause tears!If bringing a little one, please be aware one or two scenes are intended to scare. The odd naughty joke for grown-up laughter ensures that we all finish Happily Ever After.

Other shows are also available….