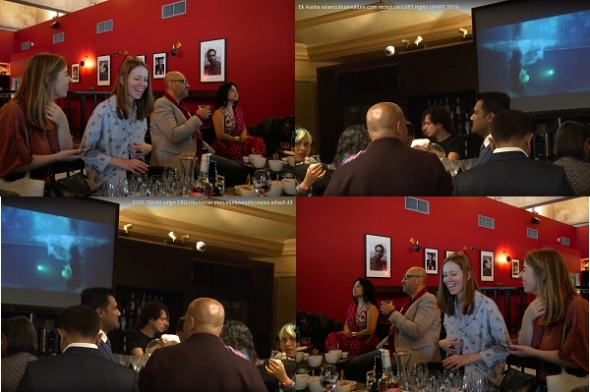 On the night of March 29 – when Britain was first mooted to leave the European Union (EU) but didn’t, we hosted a pre-screening reception at the Regent Street Cinema, with drink and Indian snacks, for the film, ‘Ek Aasha’ as part of the UK Asian Film Festival (UKAFF) for which we are the media partners.

A film about transgender, it broke many boundaries and impressed our guests enormously.

A big thanks to Dr Pushpinder Chowdhry, the founder of Tongues on Fire (as it was in the beginning 21 years ago before rebranding as the UKAFF more recently) and Aman Dhillon, festival and projects manager and Samir Bhamra, UKAFF creative director and of course, the director of ‘Ek Asha’ himself, Mayur Katariya, who was screening his debut feature.

>>>>>
LATER, in June, we hosted a reception for the Indian film, ‘Sir’ – a hit in Cannes in 2018, where it enjoyed its world premiere – www.asianculturevulture.com welcomed filmmaker Rohena Gera to our pre screening drinks and nibbles at the BFI Southbank.

ACV editor Sailesh Ram introduced Gera and the film and ‘Sir’ screened at the BFI Soutbbank as part of the London Indian Film Festival (LIFF).

It was in recognition of marking 10 years of LIFF that acv hosted the reception.

We had a number of guests come to the reception and they enjoyed the film and the chat post screening with Gera and the BFI’s Gaylene Gould, immensely.

A film that explored contemporary Mumbai and the shifting emotional trajectories of a jilted well-heeled young male lawyer and his single, upwardly mobile and ambitious female maid was a delicate drama of poise and possibility and left as many questions as it did answers for the engaged audience.

A big thanks for Cary Rajinder Sawhney, the founder and director of LIFF, Ashanti Omkar, Milan Mantri, Francesco Legnazzi and Noor Daldoul and the BFI Southbank for making this possible.

In 2014 (not quite past our first year), ACV had hosted a reception marking the 5th LIFF, so it was good to be marking up another five years of both acv and LIFF – and LIFF making it to 10!

That film was the romantic cross-cultural drama, ‘Hank and Asha’ and the reception was at the ICA.

See you all in 2020 and at the next www.asianculturevulture.com event!
Subscribe here and you won’t miss our next event