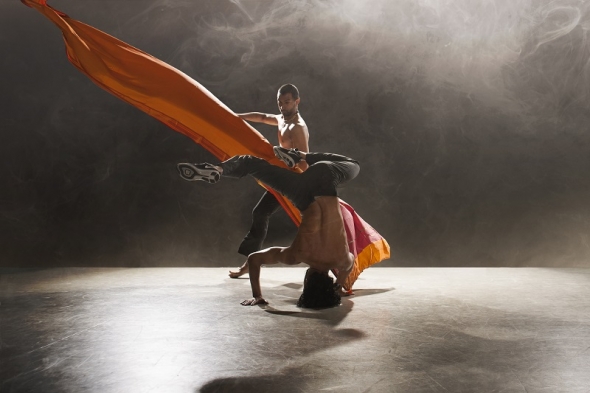 THERE’S still a chance to see a unique piece of work that imaginatively mixes Indian classical dance and hip hop, created by one of the country’s foremost choreographers.

Shobana Jeyasingh (pictured below) has her own dance company and has been working in dance for more than 25 years. She was also a judge in the recently concluded BBC Young Dancer of the Year competition.

A Bharatanatyam specialist, her latest work is a longer and more involved work than was previously staged in 2015.

Now called ‘Material Men redux’, it charts a particular history based on the two dancers’ own family backgrounds and dance styles.

It finishes its short UK tour with two performances in London on Friday (April 28) and Saturday (April 29).

Based around Shailesh Bahoran, a hip hop dancer, now based in the Netherlands, and Sooraj Subramaniam, now living in Belgium, via Malaysia and Australia – both had great grandparents who left India as indentured labourers.

The practice of moving people from one part of the British Empire to another was not uncommon for its labour requirements.

Jeyasingh told www.asianculturevulture.com: “The Indians who left had no idea where they were going to be and spent a 100 days on a boat, so ‘Material Men’ is about the history of indentured labourers and migration.”

The work was originally commissioned by the Southbank Centre and premiered there (read Tasha Mathur’s review, link below) in a shorter version.

Jayasingh added: “There is commonality and difference in their dancing styles and both these dancers are young Indian men but they have chosen different styles.

“Hip hop is a form of protest and comes from the street when people had nothing, all they had was the pavement. It’s anti-establishment.

“Indian classical dance is quite the opposite – it was a dance patronised by temples and royalty and so these two styles come from completely different ends of society but the dancers themselves live in Europe and are originally from India.”

The new long work includes new choreography and a film collage of archive footage and images by Simon Daw. The commissioned score is by acclaimed Australian composer Elena Kats-Chernin and is played live on stage by The Smith Quartet with additional sound design by Leafcutter John.

There were still tickets at the time of publication, for Saturday.