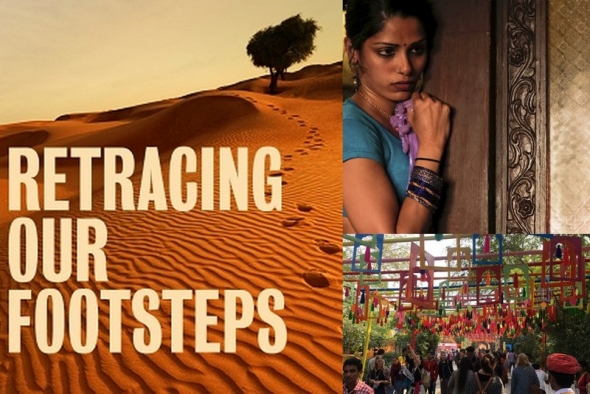 THOSE of who receive our newsletter (hint/subscribe) will know a little about this three-day series of theatre readings taking place at the Royal Court in London, later this month.

Curated by Suman Bhuchar, a contributor editor to www.asianculturevulture.com, three seminal works by Asian authors will be the subject of readings and follow-up discussions. On the bill are ‘A touch of Brightness’ by the late Partap Sharma; ‘Borderline’ by Hanif Kureishi; and ‘Blood’ by Harwant Bains.

Retracing our footsteps (May 30-June 1)

Both Kureishi and Bains will attend the readings of their plays, performed by professional actors and after each there will be a chance to discuss themes and talk about how much – or how little – things have changed since they were first written and performed.

There’s a veritable cast of talent and experience of theatremaking among the participants.

Suman Bhuchar told acv: “It’s partly about preserving the legacy of these very fine works, but also drawing connections between the past and the present and creating a dialogue between one generation and another. We want to inspire and further invigorate today’s debates and ask if enough progress has been made.”

KNOW about the Jaipur Literature Festival (Zee JLF) and its British edition?

Held every January now for a decade in one of India’s most popular tourist destinations, this unique assembly is described as the greatest literary show on earth, and routinely attracts star names and has more than 200 speakers from around the globe.

For the fifth year, there’s no need to go to Jaipur to get a taste of this very remarkable literary gathering – it returns for its UK edition at the British Library in Kings Cross.

Nearly 70 authors will attend Zee JLF at the British Library – among them Shashi Tharoor, Indian MP and former diplomat, and a JLF regular, his latest book ‘Why I am a Hindu’ has caused quite the stir. American Katherine Boo, investigative journalist and one time Mumbai resident, best known for prize-winning book, ‘Behind the Beautiful Forevers’ will be among the speakers, as will Lord Meghnad Desai, and star couple Javed Akhtar, poet-lyricist and screenwriter with wife, Shabana Azmi, celebrated actor and activist. One of India’s most exciting young poets Tishani Doshi will also be at the festival. Indian multi-national broadcaster Zee are the headline sponsors.

FILM buffs, are you looking forward to the London Indian Film Festival (LIFF)?

There’ll also be a special tribute to the late Bollywood icon Sridevi with one of her celebrated roles in Shekhar Kapur’s Bollywood blockbuster, ‘Mr India’ (1987).
Among the other highlights of the programme are British ‘Eaten by Lions’, Toronto fave, ‘Hva vil folk si’ (‘what will people say’); 2017 London Film Festival fave, ‘The Song of the Scorpions’; ‘No bed of roses’ with Irrfan Khan in the lead.

The festival is divided into categories looking at the female directorial eye, fathers and son and extraordinary lives.

There will also be some discussion panels around two documentaries, ‘Bengal Shadows’, about the Bengal famine, and ‘Halkaa’ about a slum-dwelling boy who dreams about having a toilet.

Nobel Prize winner and LSE academic Amartya Sen, will be among those contributing to the debates. His foremost work as an economist involved studying the factors behind the Bengal famine, and he debunks ideas that it was natural and unavoidable, and shifts the responsibility onto Britain, India’s colonial masters at the time.

There will be more on all three as we approach the openings… stay tuned, if you are not already. Click here or here. Thanks!