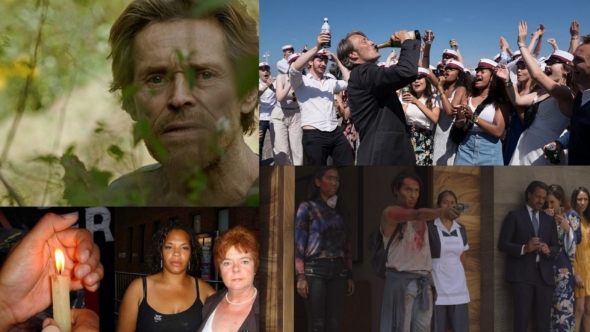 Middle-aged ‘Hamlet’ on a bender

Another Round (‘Druk’)
Director: Thomas Vinterberg
1 hour and 57 mins
THIS won the Audience Award at London Film Festival 2020 and it isn’t difficult to see why – in fact it has been pretty much charming the world on its global festival run.
The always eminently watchable Mads Mikkelsen as ‘Martin’ is terrific and carries this film about a mid-life crisis right the way through, from beginning to end.
There are great supporting roles too for his drinking buddies – but without Mikkelsen and his modern day Hamlet like turn, it might have stayed in the ok category and not been elevated to the must see.
Martin is a secondary school teacher and is just drudging along, when a colleague suggests that a professor has come up with a theory that humans already have a certain very small quantity of alcohol in their system but should increase it to get the maximum out of life. If you drink, this is highly appealing.
Throw in this film’s utterly gorgeous colour palette, much Nordic sensibility – and a little bit of 19th century Danish philosopher Søren Kierkegaard for good measure and you have a winner.
Just watch it and tell me that you agree. Haha.
ACV rating: ****½ (out of five)

New Order (Nuevo Order)
Michel Franco
1hour 28 mins
SOMETHING is going on in the city, but we are only dimly aware of what that might be.
And so, begins ‘New Order’.
We are at a lavish wedding – among beautiful and moneyed people – the elite of Mexican society. All is fine and dandy and there is a degree of decadence and the inequality between those celebrating and those working could not be clearer.
Subtle it isn’t – and so when an old employee of the family turns up and asks for financial help to secure urgent heart treatment for his wife, you know there is going to be trouble. The bride’s mother is condescending and irritated and fobs him off with a paltry cash sum, collected from family and guests. Her daughter Marianne (Naian González Norvind) is rather more sympathetic and decides to leave the wedding briefly to help and enlists the family’s driver.
Her horror journey starts right there. Violent, unsentimental, and less and less interesting, this film fails to deliver on its highly promising opening and in the end, is sadly average and predictable. The early bite is lost but not all may see it that way, it won an award in Venice.
ACV rating: ***

To the reflective spirit in all of us

Siberia
Abel Ferrara
1 hour 32 mins
DIRECTORS are a strange species – sometimes brilliant, sometimes mad, sometimes just a bit narcissistic and self-indulgent.
Dare we say this about American Abel Ferrara?
With the brilliant Willem Dafoe playing the central character ‘Clint’, this is an excursion through Ferrara’s mind.
Yes, it’s a little messy but life is like that, no? We have memories, conjectures, wild thoughts, regrets, moments of joy and happiness – and with people we loved and didn’t, or not really. Clint has certainly lived and is looking back.
This is beautiful and ugly at the same time and is a worth a watch if you like this kind of film which trades in the cinematic language of thoughts, dreams, desires and both wonder and horror.
Some of it does take place in a landscape that is how you imagine Siberia, the place to be – but whether it is or not is not an important question – what is, is how the human mind processes and deals with both trauma and happiness. Ambitious and stimulating – but not everyone will be willing to take the plunge.
ACV rating: ***

Ultraviolence
Ken Fero
1 hour and 15 mins
MEN OF COLOUR dying in custody and at the hands of the British police (sometimes quite literally) has been a subject for a while and filmmaker Ken Fero returns to it after his first film, ‘Injustice’ (2002).
Not all the cases covered here are of Black men, but the majority of screen time is given to them, and it is through their families’ testimonies that we come to hear about these tragedies and how little has happened since the intervening time.
Fero covers the death of Jean Charles de Menezes, the Brazilian man shot dead in a London tube train after being mistaken for a terrorist in 2007.
Fero narrates all this as a visual letter to his son, addressing him as ‘son’ in the film, though we never see Fero. It is a heartfelt and sincere exercise and these women – the story is told through mothers and sisters mainly – shine and elicit a very powerful sympathy.
Nothing much appears to have changed with ‘the system’ and that is the point.
Britain has seen a few cases where people beaten and downtrodden by the system have fought back and secured Justice – the Hillsborough families being the most high-profile example in recent times.
In the end, that’s the conclusion, there will be no positive change until those in power decide they have to do something – right now, they may sound sympathetic but words are no longer enough – if ever they were. Something must give. Films like this add to that welcome pressure.
ACV rating: *** (out of five)

Privacy & Cookies: This site uses cookies. By continuing to use this website, you agree to their use.
To find out more, including how to control cookies, see here: Cookie Policy
← Sonam Kapoor on lifestyle, eating habits, and ‘The Zoya Factor’ (film) – video
Toronto International Film Festival 2019 (reviews): ‘Jojo Rabbit’, ‘Rocks’, ‘Lucy in the sky’, ‘Uncut gems’, ‘Motherless Brooklyn’, ‘Honey Boy’ (red carpet videos as well) →