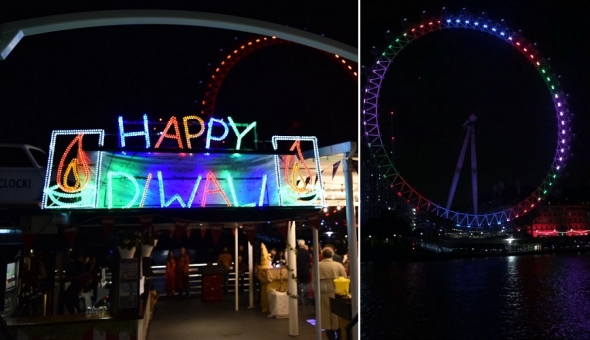 THERE was a special celebration and inaugural event to mark the start of Diwali festivities in the UK – with a special Diwali lighting ceremony of The Coca Cola London Eye.

The iconic tourist attraction was lit up with different colours that are often seen in traditional Rangoli patterns (most commonly represented by petal flower arrangements seen during many festivals throughout India).

The actual ‘switch on’ – was dedicated to the victims of the terror attacks in the UK this year and those who perished in the Grenfell Tower fire tragedy. A group of dignitaries turned the lights on together (see picture).

A number of others gathered aboard the nearby permanently moored Tattershall Castle ship to witness the spectacle.

Among them was writer and actor Meera Syal, who lauded the initiative and stressed that Diwali was not just a Hindu celebration.

She said: “I think Diwali is a festival for everybody and I am so proud to be part of a wide and successful committed British Asian community in one of the greatest multicultural cities of the world, if not the greatest.

“It is so wonderful in the spirit of diversity in the city…one of our iconic landmarks is going to go Indian innit!

“So, I think it’s a great message to send out to the world, that despite everything that’s happened out there, we in the UK are doing alright.

“We in London are pulling together in times of need to celebrate each other and support each other. And in the spirit of Diwali may I wish you all a happy, peaceful Diwali with your loved ones.”

She told those on board that she echoed what Indian High Commissioner to the UK, Yashwant Sinha, had said before her.

He had told the guests at the ceremony conducted earlier this week: “We have gathered here on the eve of Diwali which in India is on October 18 and October 19.

“It’s not just a Hindu festival, it’s a festival for all communities. So, I would like to wish all of you a very happy, peaceful and prosperous Deepavali (which is how the festival is known in much of South India).”

Sunny Jouhal, general manager of the Coca-Cola London Eye, said: “We are delighted to have been a central part of this year’s celebrations of Diwali in London. As an iconic landmark of this diverse, multicultural city we are proud to add our own lights to this special event.”

The event on Sunday (October 15) was put together by an organisation, Light Up London.

Ravi Bhanot and Vijay Davd from Light Up London said in a statement: “We are delighted to work with the London Eye, the Indian High Commission and the various community groups to have the Diwali lights switched on at the London Eye for the first time. Diwali is the Festival of Light and this event symbolises this perfectly.”

Pranav Bhanot, event coordinator thanked Coca Cola London Eye and other sponsors for their support and reminded guests that the event helped to foster community spirit and the capital and its people had come together in the wake of tragedy.

‘We believe it is important to dedicate the festival which marks the victory of good over evil to the victims of recent challenging events.
“Nevertheless, the festival should also celebrate the strength, resilience and bravery of the British public,” he said.

As well as seeing the London Eye being lit up, guests were treated to entertainment and refreshments and money was raised for The Grenfell Tower Appeal.

Thanks 4 RTs beautiful peeps! May the light follow your desired paths always…
Now, who was at #LondonEyeDiwali #Diwali Story + pix next.. pic.twitter.com/EKwiY9WVMz