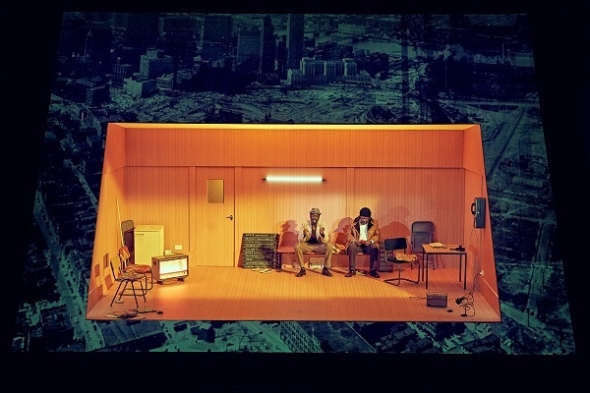 AUGUST WILSON is one of the greatest playwrights of the 20th century.

He is chronicler of the black community in America and presents this powerful slice of life play of 1970s America set in a taxi cab office (which the writer, Ishy Din sited as one of the inspirations for his play, ‘Approaching Empty’ – http://asianculturevulture.com/portfolios/approaching-empty-emasculation-and-economic-decline-review/ ).

Written initially in 1979, it is Wilson’s first play in what is termed his ‘American Century Cycle’ which were ten plays depicting African American life in each decade of the Twentieth Century. All but one of these plays is set in the Pittsburgh Hill district where Wilson grew up and although ‘Jitney’ was one of the cycle to be written in the decade of which it is set, it underwent rewrites and was first produced in 2000.

Jitney is a term for an unlicensed taxi cab and in this story applies to a taxi firm operated by the main character, Becker (played with great nobility by Wil Johnson) as regular taxis did not operate in this area of Pittsburgh.

In this revival, directed by Tinuke Craig and produced by the Old Vic, Headlong Company and Leeds Playhouse, there is an exploration of fragile masculinity, inner city racism, gentrification and intimacy and it is beautifully staged and performed.

The set design by Alex Lowde (who also does the costumes) is in warm tones of brown and looks like a 1970s office, complete with furniture and a door in the middle where the actors come in and out and there is constant opening and shutting of doors; while they rush to answer the phone hung on the wall which rings consistently providing a regular rhythm to the play. The costumes epitomise the cool of the times – with leather jacket, jeans and flares.

Each act is punctuated by stylised sequences of movement to denote the passing of time and a figure of a man arriving with his thermos and his briefcase that echoes a kind of continuity and time passing.

The whole play takes place in the cab office which is home to several characters of different ages and each has an individual story, set against the backdrop of the knowledge that they are about to be evicted in the name of ‘progress’.

Becker is the man who runs the team; then, there is the drunk, Fielding (a very fine Tony Marshall); an ex-war Korean vet, Doub (Geoff Aymer) who is a calm presence; Youngblood (Solomon Israel), is a Vietnam war solider who is trying to provide for his family; while Shealy (Nnabiko Ejimofor), runs a bookie business from the office; with Turbo, the mercurial gossip (Sule Rimi) stirring things up for Youngblood and partner Rena (Leanne Henlon) by insinuating that he has been unfaithful to her with her sister.

There are other characters such as Booster (played by Blair Gyabaah), Becker’s son, who has been released from prison and Philmore (Dayo Koleoshois) is a passenger. While individuals struggle to eke out a living and cope with the racism of the wider American society, they know their days are numbered.

Individual stories are at the core of ‘Jitney’, and it dissects these men’s ambitions and drives.

Becker and Booster have a difficult father/son relationship; the black love story of Youngblood and Rena could be kyboshed by Turnbo’s malevolence and jealousy; and the drunk who has reached the bottom but is among his fellow men.

This is a moving, absorbing, rich production with emotional depth.

It opened at Leeds Playhouse in 2021 but was shelved due to the lockdown, then had a run at the Old Vic in London and has been touring. It is now in its last week (See below for listing).

Privacy & Cookies: This site uses cookies. By continuing to use this website, you agree to their use.
To find out more, including how to control cookies, see here: Cookie Policy
← Mumbai Film Fest ( Jio Mami with Star 2017): Dreams start here…(reviews: ‘The Forsaken’, ‘Ashwathamma’, ‘Walking with the Wind’ and ‘One Thousand Ropes’)
‘The Boy With The Topknot’ – Best BBC commission of the year? →