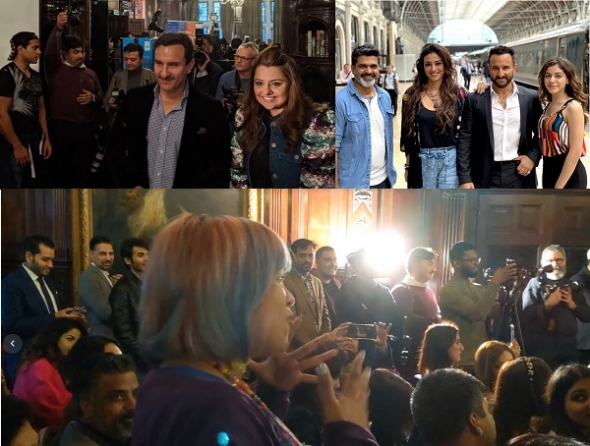 BOLLYWOOD icon Saif Ali Khan (SAK) was in London yesterday (January 9) along with producer Deepshikha Deshmukh to launch the trailer of the film, ‘Jawaani Jaaneman’ and argued the film doesn’t peddle stereotypes or indulge in clichés.

The film is set in London and was shot here last summer. It is set to hit cinemas on January 31.

Khan said Deshmukh and Pooja Entertainment came on board when Khan’s new production company Black Knight Films – which had already started filming – was looking for more money and partners.

“They helped us with a little bit money,” SAK said in his preamble before the trailer was unveiled to the media at a west London hotel.

It’s essentially a comedy caper and does turn on a rather familiar trope – the ageing playboy who has to grow up – finally.

Khan plays ‘Jazz’ – a London property broker who is still chasing women in nightclubs, drinking too much and generally having a good time, despite being of somewhat advanced years.

Everything is turned upside down when he discovers a woman he first befriended in a night club may be his daughter – ‘Tia’ (played by Alaya Furniturewala) or at least she claims to be the product of a previous dalliance or relationship – the trailer doesn’t really reveal which.

SAK said there were two elements that really stood out for him personally and will undoubtedly, help to sell the film, he believes.

“It’s the quality of writing and directing that brings you to a film,” he explained.

“The director (Nitin Kakkar) has directed every scene so much better than on the page.

“The second thing was Alaya – she was brilliant. I felt like I was working with a Shah Rukh Khan – (she is that) high up there – I know she doesn’t look anything like him – but this generation is so well prepared and rehearsed and her timing…”

He implied that she really helped to make the film and the chemistry between them is something that will make people want to go and see ‘Jawaani Jaaneman‘ (literally, Young Sweetheart).

Some are also looking forward to seeing SAK alongside another veteran star – Tabu. She plays Tia’s mother and SAK explained why she was brought on.

That song is ‘Ole Ole’ – a track from the film, ‘Yeh Dillagi’ (1994) in which SAK is something of a smooth operator and an alpha male metrosexual pin-up, as described by one female member of the media, when she asked a question about the song.

Earlier, SAK joked that it took him just “hours” to remember how to reprise the role of a Punjabi party boy when asked by moderator Tommy Sandhu.

SAK also admitted that fatherhood and parenting was not easy and that the film explored that too.

“Fatherhood is a very difficult role in real life and most of us get messed up with the relationship we have with our parents,” he opined. “Most of us are not ready for it (parenthood) when it happens – we don’t know how to deal with it.”

There’s no doubt that SAK was in fine form, exuding charm and star power but at the end of the day this film has to find an audience… which hasn’t always recently responded to stars or new masala comedy type films.

www.asianculturevulture.com’s Momtaz Begum-Hossain asked whether the film, especially for UK audiences, could work with such stereotypes and dated representations.

SAK responded (abridged): “I don’t think I agree with you about stereotypical representation, but we bear in mind your concern and we are always concerned about how people feel…”

“I’ve never played such a hard-drinking (character), my guy passes out about four times and wakes up and doesn’t know where…”

“We have tried to go out there and entertain and perform and when you meet your own daughter in a nightclub and maybe you are trying to pick her up as well, (without knowing she is related), and – there’s nothing incestuous about it – at the same time, it’s a very unique situation and it’s funny and we are in unchartered territory and usually that is a good indication that the audience will enjoy it…

“I am confident most people won’t agree with you.”

See the video for the full Q&A

Privacy & Cookies: This site uses cookies. By continuing to use this website, you agree to their use.
To find out more, including how to control cookies, see here: Cookie Policy
← Zaira Wasim’s Young Rising Asian Star award, her new film and working with global icon Priyanka Chopra and top Indian actor Aamir Khan
‘Tartuffe’ RSC production has laughs and serious point to make… (review) →