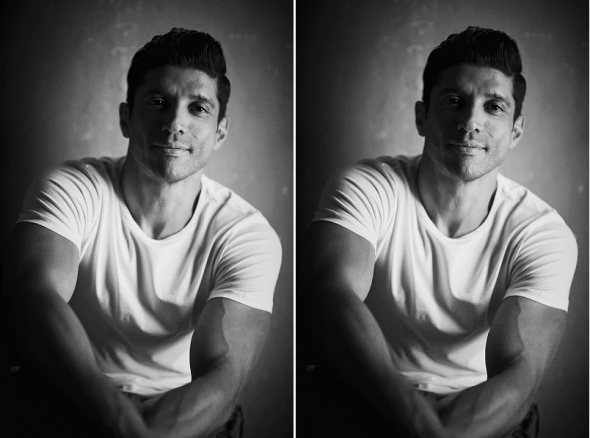 The actor, producer and writer, has recently launched himself as a singer and released his first single, ‘Rearview Mirror’ and has an album ‘Echoes’ due to be released in January 2019.

Earlier in the autumn, Akhtar was in London to speak at the Economic Times India UK Strategic Conclave where he was awarded a game changers accolade.

He took some time out to talk to acv about being an artist and generally discussing his film projects.

“It feels good to be recognised for all of your body of work for various roles I’ve played through the last eighteen years of working in film and in music,” he acknowledged to www.asianculturevulture.com

“Any kind of recognition of those efforts and the work is always appreciated, the fact that you have been given a platform in which your voice, your opinion does matter means you have a certain social responsibility that’s beyond just making film and entertaining people.”

Notwithstanding his professional success, his personal life has undergone some turbulence and perhaps the new single and album have been the result of some introspection?

Baroness Sandip Verma with Farhan Akhtar and Claire Perry, minister of state for business, energy and industrial strategy presenting the award at the Economic Times Conclave in London

“Over the last two and a half years there’s been quite a serious change in my personal life,” he reflected.

“My marriage (to Adhuna Bhabani) of 16 years came to an end, so there were just a lot of many different emotions inside of me, and I just found it somehow cathartic, easier, to be able to write down what I am feeling through that transitional period. And this song, which is ‘Rearview Mirror’, is on some level dealing with a certain degree of guilt of not being able to see it through.”

He confessed to feeling depressed “at certain points while all of this was going on”.

Akhtar seems to have emerged wiser and more perceptive, and from our conversation it appeared that the forthcoming album (of 11 songs) will reflect some of this new awareness and sensitivity.

“A lot of the album is inward looking,” he said. One of the tracks, ‘Why Couldn’t it be Me’ is about a young boy who survived the school shooting that had happened in Peshawar in 2014, where 141 children (according to the BBC) were killed and this young boy who didn’t go to school that day and lost a sibling in the massacre in the school, so it’s just a song written from that little boy’s point of view. And there is a song that I have written for my two daughters, which is called ‘Be All You Can Be’.”

He talked about how the songs are written and performed in English and the album has been produced by the Grammy award winning producer and engineer, Tammaso Colliva, “who perfectly understood that we really need to be telling the story and not focussing on making it sounding trendy and cool.” Colliva’s Grammy was for ‘Drones’ in 2015.

Many will, of course, also recall Akhtar sang in his acting debut film, ‘Rock On’ in 2008; and along with his sister, Zoya also penned the English songs for Gurinder Chadha’s film, ‘Bride and Prejudice’ (2004). He first started out as an assistant director and then worked as a director, garnering much acclaim for ‘Dil Chahta Hai’ (2001), ‘Lakshya’ (2004) and ‘Don’ (2006).

Alongside the music, Akhtar has also had time to immerse himself in a new film project, directed by Shonali Bose, with a working title, ‘The Sky is Pink’ (due out on February 22 2019).

Bose has had her films screened in London (‘Amu’ Tongues on Fire Festival 2005 – now known as the UK Asian Film Festival) and then ‘Margarita With a Straw’ (at the London Film Festival 2015) and in this project, he is working with Priyanka Chopra.

“It’s a very interesting film, it’s a true story about a couple who now live in London actually, about them and their family and the daughter who was born with SCID (Severe Combined Immuno-Deficiency) and how they dealt with that situation in their life.”

SCID is where a child is born without having any immunity whatsoever – so the immune system doesn’t function at all, he explained, and you know that the passing on of the child is inevitable.

“It really a story of the courage of this family how they kind of really rally to make sure that she has nice life for as long as possible.”

Filming and storytelling are still of interest – he has been the helm of Excel Entertainment which produced ‘Gold’ (directed by Reema Kagti) which did extremely well and his sister, Zoya is directing ‘Gully Boy’ due out on February 14 next year.

Putting out an album and being a musician seems a bit of a new avenue for Akhtar and he hopes the audiences will appreciate the honest effort behind this endeavour.

He has, since speaking to us, made a stand on #MeTooIndia, which has seen many stories emerge recently; he is one of the few high-profile figures to openly exhibit sympathy and come out in defence of women making allegations of abuse against prominent figures in India.

Perhaps this is not such a surprise because in 2013 he launched Men Against Rape and Discrimination (MARD) following the tragic murder of Pallavi Purkayashta, a Mumbai lawyer, who was brutally attacked by the nightwatchman to her residence as she spurned his advances.

But do you want to be a pop star, we asked?

“I want to be a musician for sure, I don’t think my music qualifies as pop so that I don’t think there is any eventuality of that happening, but I will keep recording music, I will keep putting music out, but it will be within the genre which is not pop, it’s kind of an alternate rock space, it’s where it’s at!”