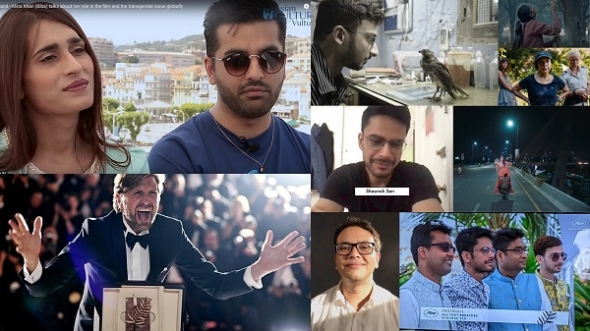 BOTH South Asian films in official selection – the narrative feature from Pakistan ‘Joyland’ and the India documentary, ‘All that breathes’ were decorated with awards at the end of the festival.

Saim Sadiq’s ‘Joyland’ won the Jury Prize in its section – Un Certain Regard – a strand that is very much titled towards art and up and coming directors who are still making their way.

Sadiq who hails from Pakistan has produced a movie that is hard to resist on an artistic level and it is fully deserving of its Jury accolade losing out only to ‘The Worst Ones’ by Lisa Akoka & Romane Gueret which won the Un Certain Regard Prize.

Sadiq’s film is hugely poised for a first feature and there should be little doubt that he is a writer-director to watch on the world stage. His film may have attracted headlines for its transgender storyline and moral hardliners will hamper its progress in South Asia – and Sadiq in our interview alluded to issues with the censor board and what may be permitted for it to screen in his country.

There is little of anything physically explicit in the film (though a scene of clothed self-pleasure), about a married man (Ali Junejo as Haider) falling in love with a transgender woman (Alina Khan as Biba).

Haider’s marriage is in a state of stasis but it is far from acrimonious and there remains a strong bond between husband and wife. The central story has depth and nuance and Sadiq elicits fine performances throughout and Khan should be applauded for what is her very first performance on celluloid.

In our interview she talks about her thrill of seeing herself on the big screen and reprising a character that often has a cisgender man in that sort of role. She, on the other hand, is the real deal as it were and she deserves her moment in the spotlight and more. Articulate and thoughtful in our interview, she is a fine ambassador for South Asian transgenders fighting their own battles.

The film has a distributor in France and Sadiq indicated that he is likely to take the film on the international film circuit.

It deserves to be seen widely and in countries where there is a significant diaspora there is no reason why it should not show in cinema screens more generally, and beyond just the festival circuit.

That it could also screen in India without a huge kerfuffle would be interesting too – as the story is very relatable and the same patriarchal culture dominates and the film has international production talent and endorsement (one of its producers is Indian origin Apoorva Charan and Ramin Bahrani, director of ‘The White Tiger’ (2021) an American Iranian, is an executive producer and hailed Sadiq before its Cannes screening – see here).
More about ‘Joyland‘ wins from our tweets in real time last week…

For Sadiq’s own introduction and reaction to the film in Cannes, see

Ironically, it may be more difficult for Indian audiences to see ‘All that breathes’.

Though ostensibly about a family of amateur bird doctors who tend to injured kites in Delhi – it is about a lot more and again fully deserves its Golden Eye award – L’Œil d’or.

Interestingly, this is the second year in succession that India has won this award. In 2021 Payal Kapadia’s ‘A Night of Knowing Nothing’ scooped the same accolade.

‘All that breathes’ is perhaps more conventional and has a fly on the wall style narrative with three people Nadeem and Saud, two brothers, and their cousin, talking to the camera and the film charts their remarkable story from community heroes to the world stage – an article in the New York Times and then what isn’t covered in the film, but acv readers will know about is, its world premiere at the Sundance Film Festival in the US, earlier this year and its Grand Jury Prize win there.

We didn’t follow it in Cannes, where it was a special screening – because we already have interviewed director Shaunak Sen and that interview has yet to be edited and broadcast but will very soon…

There was also a significant triumph for Nepal in the short film category with Abinash Bikram Shah getting a Special Mention for his ‘Lori’ (‘Melancholy of my mother’s lullabies’) behind the Palme d’or for shorts, ‘The Water Murmurers’ (‘Hai Bian Sheng Qi Yo Zup Xuan Ya’). There were only 11 short films selected to be screened at Cannes officially.

His 14-minute film is about a mother singing to her young daughter and then when she stops reality intervenes. Shah, who was in Cannes to receive the award, told The Kathmandu Post: “I feel ecstatic. This is an incredible moment. But having said that, I also know this is just the first step towards something bigger.”

It was announced on Saturday night that the top award in Cannes had gone to ‘Triangle of Sadness’ by Swedish director Ruben Östlund.

ACV saw the film in Cannes and enjoyed it, but was somewhat taken aback by its triumph. Entertaining, funny and thought-provoking, it has a messy middle which we imagined would score it down but its victory is a second Palme d’Or for Östlund who took the same award at Cannes in 2017 for ‘The Square’ – another satire, this time about the art world and not the super rich and beautiful featured in ‘Triangle of Sadness‘.

The next accolade down – the Grand Prix were jointly awarded to ‘Close’ by Belgian Lukas Dhont and ‘Stars at Noon’ by veteran French director Claire Denis.

The Award for best director went to South Korea’s Park Chan-Wook for ‘Decision to Leave’ (‘Heojil Kyolshim’). The Best Screenplay went to Tarik Saleh for ‘Boy from Heaven’ (‘Walad min al Janna’), while the Jury Prize was jointly awarded to ‘EO’ directed by Jerzy Skolimowski – an original movie in which the central narrator is a donkey and ‘The Eight Mountains’ (‘Le Otto Montagne’) by Charles Vandermeersch and Fleix Groeningen.

The 75th anniversary prize went to ‘Tori and Lokita’ by Jean Pierre and Luc Dardenne. It was again one of three competition films acv did see (our reviews are here ) – and we thoroughly approve! The refugee crisis remains acute and we ignore it at our peril!

Zar Amir Ebrahim took the Best Actress Award for Iranian Ali Abbasi’s ‘Holy Spider’ and the award for Best Actor went to Song Kang-ho for his role in ‘Broker’ by the great Korean auteur, Kore-Eda Hirokazu.

Away from the official selections and Deepika Padukone being part of the main Competition Jury, there was much excitement at India being selected as the Country of Honour in the market section, or Marche du Film. What did this mean? It meant India, its films and filmmakers were under the spotlight. There is more about this in our own reflections and analysis of covering this Cannes 2022 or Cannes 75 – thank you for your company and interest. Keep following the bird!