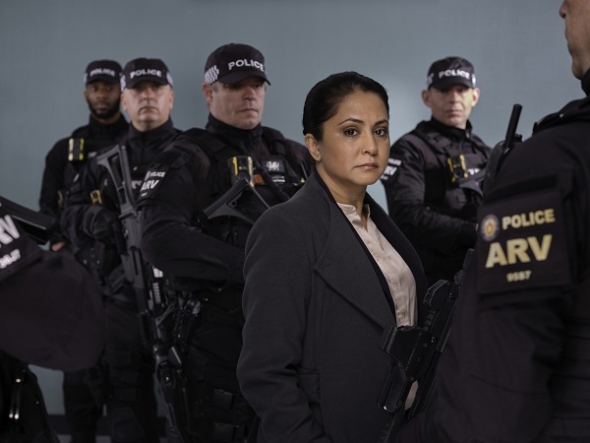 Themes of identity, racism and ethnicity are given an original take in a new crime thriller…

By Mamie Colfox and Sailesh Ram

PARMINDER NAGRA returns to the small screen in a cracking new detective series which also tackles everyday racism, identity and has at the heart of it a thrilling, twisting investigation that will keep you guessing.

Written by actor Maya Sondhi, and with the support and guidance of executive producer Jed Mercurio, (of ‘Line of Duty’ fame), the four-part series will hit ITV on Bank Holiday Monday (and continue over three consecutive nights).

Sondhi, who has written episodes of Channel 4 school drama, ‘Ackley Bridge’, told www.asianculturevulture.com that she wants audiences to think about things they might not necessarily have come across before.

“Apart wanting it to be entertaining and enjoyable, I would like people to think about their identity and how we interact with each other – and have a think.”

“I feel putting everything into a mainstream drama without hitting people over the head is the way to do it.”

At the show’s press conference earlier this month, Sondhi explained how her struggle with identity during her childhood influenced her writing in ‘DI Ray‘. DI Ray refers to the central characater, Detective Inspector Rachita Ray (Parminder Nagra).

Sondhi said: “I’ve felt a lot of guilt and shame and I didn’t connect it to the fact that I’ve grown up not fitting in. When I was born in 1983, I didn’t see ‘me’ anywhere on telly, so I wanted to be white, because it was easier to fit in.

“But then I felt really guilty because I wasn’t fitting in with the Indians either. My parents stopped speaking Hindi and Punjabi to me at aged four, so I can understand it, but I can’t speak it, and that’s another huge feeling of guilt for me.”

There are some lovely scenes between Nagra as DI Ray and the police family liaison officer, Maanuv Thiara, who as PS Tony Khatri, is totally comfortable speaking in Hindi or Punjabi and wonders why his Asian boss from Leicester isn’t as conversant.

What he does perhaps get more is that DI Ray is also misunderstood daily.

There is another uncomfortable scene where a police admin officer hands DI Ray a lanyard with a completely different Asian woman’s name on it, and then has to apologise profusely when Ray points this error out.

Nagra, the ‘Bend it Like Beckham’ star, explained Ray’s complex character at the conference: “She’s at a moment in her life where she’s trying to figure out where she sits with everything, whether that’s personally, in her relationship or at work.

“There are a lot of question marks over her life, but within the core of her being, she is a strong, tenacious, persistent person who never lets anything go.”

DI Ray has just got her long-awaited promotion but there are some around her who think that’s because she ticks a box and nothing else.

As a police procedural, the show includes many challenging police references, which Nagra explained were quite difficult to get her head around at first.

“Within the context of the story, and the police stuff going on, it does start to fall into place.

“What I found really hard to say was reeling off license plates. That took me way longer than some of the longer speeches.”

She said that Ray could be something of a trailblazer – and Sondhi has not ruled out writing more of Ray, as she told acv she has left it open as to whether we see her again.

Nagra said: “Rachita is a really good, meaty character and to me it’s all about finding this woman’s place in the world. You don’t often have an Asian female lead on TV – it’s starting to happen more, but having been in the business for so long, I feel like I’ve been saying the same thing for a long time. I can see the change with the likes of ‘Bridgerton‘, but in DI Ray this is my generation of women, we’re in Birmingham and it’s so relatable – it’s nice to play. That was the main appeal for me that I’m not playing the best friend of somebody or a secondary character, it’s all about Rachita.”

As a Midlander, Thiara is proud that Birmingham has been used as the setting for the show and explained his excitement in the conference:

“I grew up all over the Midlands, in Coventry, Birmingham and Wolverhampton…seeing the amazing cityscape of Birmingham that you see on screen, it was like when you watch ‘Succession’ and you see New York, and London. Well, Birmingham looks exactly like that! That was really empowering, I enjoyed that.”

Bamber’s character, Martyn, has no Indian heritage but is clearly very proud of Rachita and very supportive of her making her way in the force.

“It’s very subtle, it’s very lightly worn. That’s the one thing I’d say about Maya’s writing which is why it’s so impactful, is that it doesn’t bash you over the head.”

He continued: “Martyn’s role within the whole story is that he provides a relationship that should be one of true contentment and freedom. These are people approaching middle age who are successful, and he is a DCI (Detective Chief Inspector). He’s got this amazing relationship with a woman of South Asian heritage. He wouldn’t voice it but he probably feels pretty good about himself, and he is an example to everyone.”

He takes her as she is but can we?

DI Ray starts at 9pm on Monday, May 2 on ITV and concludes on Thursday May 5. You can watch it on ITV Hub as well and in its entirety after Thursday.

Privacy & Cookies: This site uses cookies. By continuing to use this website, you agree to their use.
To find out more, including how to control cookies, see here: Cookie Policy
← Bollywood star Anil Kapoor at a London shopping centre…
Saudha – ‘Melody of Love & Shadows’ comes to London as music and poetry group look ahead to Europe and Javanese Gamelan →