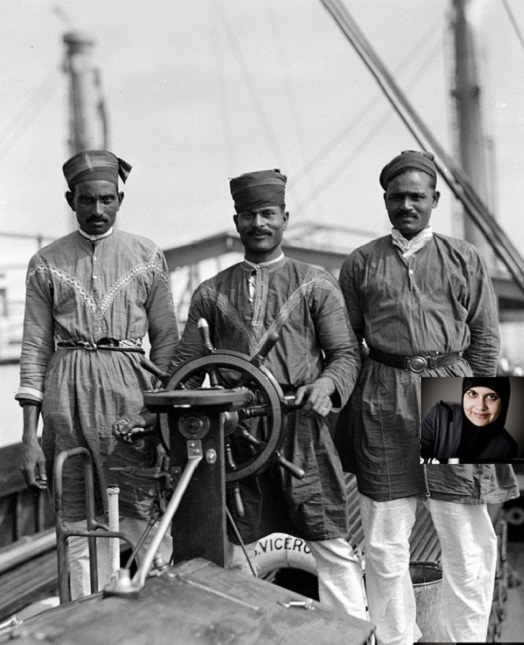 ALTHOUGH the word ‘Lascar’ is presently outmoded, it points to a rich and unique aspect of world history.  Lascar was a name given by the Europeans to describe the non-European sailors. It came from the Persian word ‘Lashkar’ meaning ‘military camp’ or ‘army,’ and Al-Askar, the Arabic word for ‘guard’ or ‘soldier.’

Lascars came from the Indian Subcontinent or other countries east of the Cape of Good Hope; this was the initial East Indies. They came from Africa, the Middle East and Eastern India. The word ‘Lascar’ by the 1860s was about people from the region Eastern India to South China. Eastern India is now Bangladesh.

The use of Lascars started in the early days of the British East India Company dating back to the 17th century on merchant ships trading with Britain. The East India Company was set up to establish trade routes, to discover and bring back new goods, and in doing so broke down the geographical barriers of the world.

English men initially worked aboard these ships. The sickness and death rate amongst these seamen was high during the long voyages. Many deserted ship as it took three to four months to travel from England to India. This left ships short of crew for the return voyage to England. So Lascars were employed to replace most of them. They were employed ferrying back cargoes containing tea, sugar, coffee, silk, cotton, spices and porcelain.

As shipping increased, so did the number of Lascars. They were promised their passage home. Many had no intention of settling in England permanently.

Lascars were fed rotten food and this resulted in health problems. Many Lascars were mistreated and died of heat stroke, exhaustion, malnutrition and disease. Some were brutally punished.  This prompted many Lascars to jump ship in British ports to escape maltreatment and their inferior employment conditions.

Although many of the seamen lived lives of desperate poverty and degradation in British ports, they chose the chance for a better life working in shipyards and railroads over the dangerous journey home. Those who were paid received very low wages. Unfortunately, however, the majority of the Lascars, uneducated and unwanted, eked out existences as street sweepers, peddlers and even beggars in London’s dockland areas of Shadwell, Wapping and Poplar.

Aside from their meagre employment and housing opportunities, Lascars were ill equipped for the cold weather in England.  They owned only thin, pyjama-like garments and heelless shoes. Unable to find shelter against the British winters, many perished on the streets.

This prompted the founding of the Strangers home in West India Dock Road, Limehouse, in London by The Society for the Protection of Asian Sailors, a missionary group, in June 1857.  This sheltered up to 200 destitute Lascars and was a safe haven for them.

Many British women also gave lodging to the displaced seamen. A lodge run by an Englishwoman called ‘Calcutta’ Louisa and another run by ‘Lascar’ Sally, (Sarah Graham.) Most of these sailors settled down and took local white English wives, due to a lack of Asian women in Britain at the time. This was seen as unacceptable and a disgrace to society. Some missionaries referred to the growing Lascar population as “The Asiatic in England” and “The East in The West.”

For over 350 years, Lascars played a very important role, ensuring goods from India reached British ports safely in times of peace and war. By the eve of the First World War, there were over 50,000 Lascars in Britain. Many had no choice but to contribute to the war effort  for which they had not bargained. Their loyalty was surprising when considering that Lascars were not fighting for their own country, but for a nation that didn’t embrace them.

‘Lascar’ is a historical novel I wrote and it was published in 2012 by Indigo Dreams Publishing. It is set in the 19th century and it tells the story of one man’s journey to fulfil his destiny.

One of my paternal ancestors was a Lascar. Stories were passed down orally through generations.  This inspired me to write the novel and to revive the history of the forgotten seamen.

More details about Shahida Rahman’s work can be found at: www.shahidarahman.co.uk