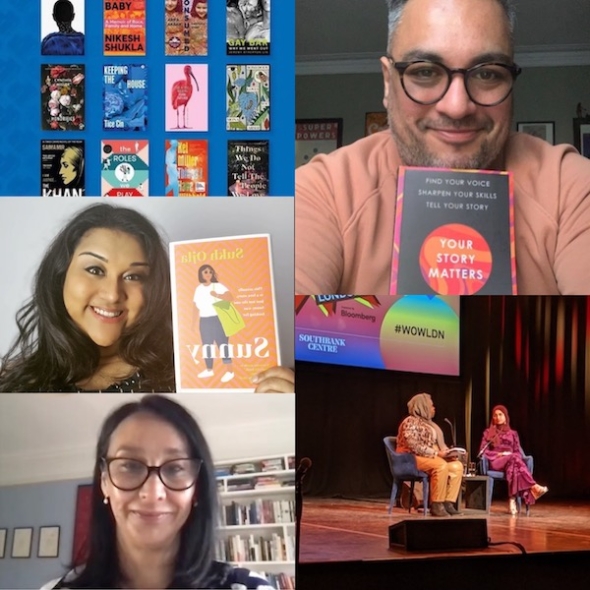 NOVELIST and writing guru Nikesh Shukla has a new book out.
‘Your Story Matters‘ has just been released by Pan Macmillan and is aimed at helping writers find their voice, with tips on structure, voice, intent and instinct.
Although Shukla had covid-19 on publication day, he managed to post on Twitter: “I have Covid and it is publication day for my new book on writing, so indulge me a bit of self-promo before I go back to bed.”
He has since tweeted about his recovery more recently.
Amongst receiving many congratulations on his nomination, Faber Academy, where he teaches creative writing, commented: “A book full of wise words on how to find your voice and tell your story, we can’t wait for you all to read it. Congratulations, Nikesh!”
Something of a prolific author, his last book was ‘Brown Baby‘, a memoir and dedicated to his oldest daughter, who was four at the time of writing that book. It is also a cool Asian dad manual, whatever self-deprecating tones he might take in the book itself.
More generally, he also offers advice, tips and guidance for aspiring writers, sometimes on social media.
He has three novels, ‘The One Who Wrote Destiny’ (2018), ‘Meatspace’ (2014) and his debut, ‘Coconut Unlimited’ (2010) – shortlisted for the Costa First Novel Award – to his name. He also edited the hugely influential, ‘The Good Immigrant‘ (2016) and set up a literary agency that aims to bring more underrepresented voices into publishing.
More: https://www.hive.co.uk/Product/Nikesh-Shukla/Your-Story-Matters–Find-Your-Voice-Sharpen-Your-Skills-Tell-Your-Story/26557855

TWO women writers have expressed their delight and pride at making this year’s Jhalak Prize Longlist.
The prize focuses on authors of colour in Britain and has eight books on its Books of the Year longlist, and three in its Children’s and Young Adult category.
Arifa Akbar, The Guardian’s chief theatre critic, whose memoir, ‘Consumed’, is on this Books of the Year list, tweeted: “Wow!! What an honour to be long-listed for this fabulous prize, and to feature among such brilliant books! Thank you @jhalakprize and congratulations to all fellow contenders!”
Her book is a memoir about losing her sister to TB and a lot more besides as she writes about Keats, family, Rome, moving to London and losing older sibling to a condition that has been on the rise in the UK, more recently.
The other titles in the Book of the Year are Mona Arshi’s ‘Somebody Loves You’, Sabba Khan’s ‘The Roles We Play’, Saima Mira’s ‘The Khan’, Huma Qureshi’s ‘Things We Do Not Tell People We Love’ and Nikesh Shukla’s ‘Brown Baby’.
Manjeet Mann, whose ‘The Crossing’ appears on the Children’s and Young Adults list, tweeted: “Lots of joy in the house today! Thrilled to see ‘The Crossing‘ on this super longlist alongside these awesome books. Thank you @jhalakprize and congratulations to everyone on the longlist!!”
In her title, ‘The Crossing’, two teenagers from opposite worlds, one a refugee from Africa, and the other a local from Dover, form a friendship amidst themes of grief and hope – forged during a refugee crisis.
Mann vies for The Jhalak Prize in this section with Roma Agarwal & Katie Hickey for ‘How was that Built: The Stories behind Awesome Structures’ and Radiya Hafiza’s ‘Rumaysa: a Fairytale’.
The Books of the Year shortlist will be announced on April 19 and the Jhalak Prize winner will be crowned on May 26.

SMART, articulate and likeable, Suhaiymah Manzoor-Khan’s latest book, ‘Tangled in Terror’ is a must read for anyone concerned about the fractures we have both at home and abroad.
While the subject matter crudely is Islamophobia, it is a sophisticated and trenchant analysis of the basis of discrimination which feeds into Islamophobia.
“It can only be truly uprooted when we focus not on what it is but what it does”, argues Manzoor-Khan, also known as the Brown Hijabi.
At the recent launch of the book at the Women of the World (WoW) Festival (March 11-13), she explained that the book is about the real-life consequences of discrimination and how a system of thought perpetuates and supports it, and links some of this to racism and the way governments operate.
She read several passages from this work, which in some ways picks up from her previous, ‘Post-Colonial Banter‘ (2019) but shows a way beyond anger and argues that both hopelessness and helplessness are part of the same dispiriting agenda. She was in conversation with fellow poet and spoken word artist Muneera Pilgrim at WoW – great to see two veiled Muslim women of colour in unfettered conversation.
Written with love and a sense of sharing insights and imagining a better world, both her and Somali British author Warsan Shire – who also appeared at WoW and with moderator Bernardine Evaristo – chart another path we could take out of the present-day horrors.
They both remarked that the generosity and support of people in the West towards Ukrainian refugees could and should be extended to others also fleeing war and state violence. What is behind this seemingly radical shift in public opinion?
Both offer a common take on this troubling question.
Manzoor-Khan is currently on a book tour, check the link below for more. (SR)
‘Tangled in Terror: Uprooting Islamophobia’, Sumaiyah Manzoor-Khan, Pluto Press https://www.plutobooks.com/9780745345413/tangled-in-terror/

Curtains on books extravaganza: videos and London next?

OFTEN described as the “greatest literary show on earth”, the Jaipur Literature Festival (JLF) drew its curtain down last week to much applause and fanfare.
Some 600 artists participated in the part-digital, part physical festival from March 5-15.
Among those authors talking about their works were 2003 Booker Prize winner, DBC Pierre – whose latest book is ‘Meanwhile in Dopamine City’. He spoke to poet and novelist Jeet Thayil. British author Monica Ali was among those talking at JLF this year. She discussed her new novel, ‘Love Marriage‘ with journalist Bee Rowlatt.
www.asianculturevulture.com covered this session. It is here. The festival has also just launched an NFT (nonfungible transfer) collection of 15 ‘moments’ to coincide with its 15th festival this year. These include JLF moments with Bollywood legend, Amitabh Bachchan, the 14th Dalai Lama, and the late and very popular former president of India, APJ Abdul Kalam.
An NFT is a digital asset that can be shared with the authorship and associated fees remaining with the creator.
JLF will be at the British Library in London later this year, it confirmed to acv. It has just started to put out videos from the 2022 sessions on its Youtube channel.
More on JLF and its NFTs: https://jaipurliteraturefestival.org/
https://www.abris.io

From funny to Sunny…comedian’s debut book…

STAND-UP and now author, Sukh Ojla’s debut novel ‘Sunny’ was released earlier this month, and explores themes of family, love and mental health. Protagonist Sunny leads a double life; to her friends she’s the upbeat single one watching them settle down with their long term partners, whilst at the age of 30 she moves back into her family home to play the perfect daughter.
Ojla tweeted: “Happy publication day to Sunny! I’m officially a publisher author. Already had my first happy cry and so full of gratitude to everyone who has supported this book. Huge thanks to @saranishaadams and the lovely team at @Hodder_Studio.”
https://www.hive.co.uk/Product/Sukh-Ojla/Sunny–Heartwarming-and-utterly-relatable—the-dazzling-/25676722