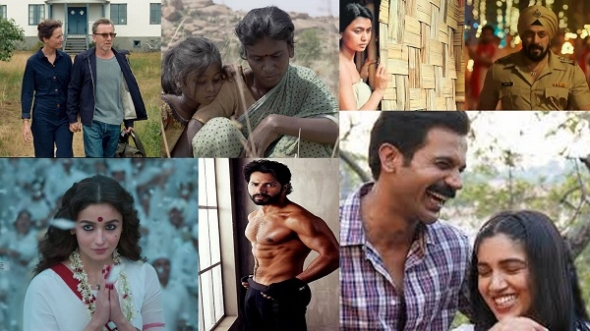 As Bollywood films struggle to find release dates, here’s who’s clashing with who, and who’s avoiding going up against the other as the industry stages a recovery and from our bird on the ground there…

Heyyy UK. Let’s get straight into the groove. Our last outing here was all about the movies Bollywood has lined up for theatrical releases after the Maharashtra government decided to open cinema halls. And the results at the box office look promising…

It is believed that business has reached about 70 per cent of pre-covid times.

Akshay Kumar and Katrina Kaif’s ‘Sooryavanshi’, which released on November 5 has so far raked in £28 million. It was released in 4,226 cinemas (1,035 in Mumbai alone) in India as well as 1,300 in 66 countries, including Israel, Japan, Chile, Egypt, Iraq and Djibouti, where Bollywood films usually don’t release. The cop thriller, also gave Kumar his biggest weekend opening, about £8 million.

‘Bunty Aur Bubly 2’, staring Saif Ali Khan and Rani Mukerji, which released on November 19, failed at the box office. The film, which is about a retired con couple trying to find out the identity of their imposters, has so far collected only £1 million.

This weekend will see a clash between movies featuring Salman Khan and John Abraham. ‘Satyameva Jayate 2’, a political thriller starring Abraham, playing a vigilante, and Divya Khosla Kumar released a couple of days back on Thursday (November 25). Khan’s ‘Antim: The Final Truth’, also staring Aayush Sharma, released yesterday (November 26). The film is about the battle between a righteous cop played by Khan and a gangster, essayed by Sharma. It’s helmed by actor/directed Mahesh Manjrekar. The clash is the talk of town in India, and almost every media outlet is reporting on it. Sharma is Khan’s brother-in-law and it is the first time they have gone up against each other.

We all know that owing to covid lockdowns and restrictions several film releases were repeatedly rescheduled. But strangely, the trend continues, despite India witnessing a slump in new cases, as well as everyday life returning to normal. Aamir Khan and Kareena Kapoor’s ‘Laal Singh Chaddha’, a remake of ‘Forrest Gump’, has now been rescheduled to April 14 from February 14, its most recent release date. On November 20, Kapoor shared the release date on Instagram along with a new poster of the film. ‘Laal Singh Chaddha’ has been probably rescheduled as Baisakhi, a spring harvest festival, will be celebrated by Punjabis all over the world on April 14 this year. Aamir plays a Sikh man in the film, a first in his career.

Interestingly, the film’s release is clashing with another much anticipated movie ‘KGF 2’. Now, due to the two big releases, horror comedy ‘Bhediya’ featuring Varun Dhawan and Kriti Sanon, has changed its April 14 theatre outing to November 2022. A few months back, Sanjay Leela Bhansali had picked up January 6 as the release date of his directorial ‘Gangubai Kathiawadi’, the story of a young girl sold into prostitution by her suitor. The movie, which stars Alia Bhatt and Shantanu Maheshwari, will now release on February 18. If reports are to be believed, the release was rescheduled at the insistence of the film’s co-producer Jayantilal Gada, who wanted to avoid a clash with SS Rajamouli’s Telugu language period drama RRR, which hits theatres on January 7.

Just three weeks back, it was announced that ‘Badhaai Do’, the Rajkummar Rao and Bhumi Pednekar sequel to ‘Badhaai Ho’ would release on January 26. Last week, it was rescheduled to February 4. Earlier this year, the makers of Ranbir Kapoor and Shraddha Kapoor’s untitled film had announced that it would release in 2022, on the day of Holi, the Indian festival of colours. But now, it’s been pushed to January 26, 2023, where it will clash with clash with Hrithik Roshan-Deepika Padukone starrer ‘Fighter’.

While the box office success of ‘Sooryavanshi’ may have offered a ray of hope to Bollywood, the frequency at which the release dates of films are being rescheduled, shows that the film industry is trying its best to make sure films are released on the best possible day and that competitors don’t eat into box office collections. Looks like these alterations are likely to continue for some time. Till then, hasta la vista.

Away from Mumbai and the home of the Indian film industry, Goa attracts filmgoers of all shades at this time of the year as India’s main government-sponsored film festival rolled into town and ends tomorrow (November 28).

The 52nd International film festival of India (IFFI) kick started in India’s sunshine state, Goa, on November 20. Due to covid protocols only 3,000 delegates have been allowed entry. The rest will tune in online. For the first time, a BRICS (Brazil, Russia, India and China) film fest is also being hosted simultaneously. At the opening ceremony, which was compered by TV host Manish Paul and filmmaker Karan Johar, actress Hema Malini was presented with the Indian Film Personality of the Year Award. Actors Salman Khan, Ranveer Singh, Riteish Deshmukh, Genelia Deshmukh, Shraddha Kapoor performed to Bollywood hits. Hollywood legend Martin Scorsese and Hungarian filmmaker Istevan Szabo were honoured with the first Satyajit Ray Lifetime Achievement award at the event. Scorsese sent a video message and re-iterated his love of Ray.

The Spanish language film ‘The King Of All The World’ (‘El Rey de Todo El Mundo’), directed by Carlos Saura opened the festival. Twenty-five feature films and 20 non-feature films have been picked up for screening under the Indian Panorama segment. ‘Semkhor‘, the first-ever Dimasa language movie directed by Aimee Baruah was the jury’s choice for the opening feature film of the Indian Panorama 2021. The language is Sino-Tibetan and spoken in India’s northeastern regions around Assam and Nagaland.

We will carry a report about the whole festival next week.

If you are looking for something to see online, let our Nat guide you as she reviews the releases on the sub-continent from this month in the www.asianculturevulture.com Bird Eye Review Show – don’t miss an episode – subscribe https://www.youtube.com/c/asianculturevulturecom1/about