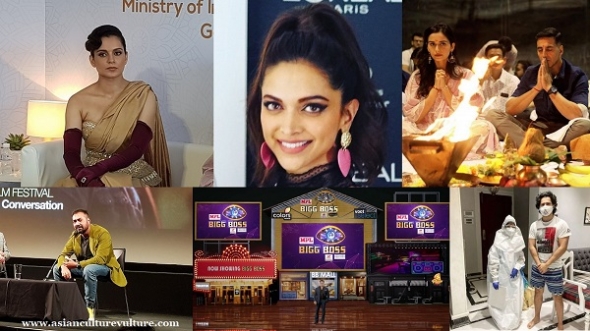 There’s a right old ding-dong and it isn’t about Covid and whether seeing a film in a cinema is safe in India…(halls remain shut)…Oh,no…our correspondent in Mumbai wades through the mud for us this month…

So, it seems, after the lull, you guys are back to square one? As far as we are concerned, we are still stuck in square one.

Well, we are talking about the pandemic in the UK and India.

The UK came out of it for a little bit (over the summer) and is now heading back into it, whereas India is still reeling from the first wave and continuing to see infections in the tens of thousands daily.

Strangely, unlike the UK or much of the world over, the media here isn’t discussing the pandemic at all (or really not as much) – it’s as if there is a blanket ban on the coverage of Covid-19 – or as if it doesn’t matter very much.

Instead, it’s still Sushant Singh Rajput and the recent revelations about the nexus between the drug mafia and Bollywood that make news.

The star’s death in June has sparked a wave of claims and counter claims and currently several Bollywood stars – Deepika Padukone among them – are helping the Narcotics Control Bureau (NCB) investigate an alleged drugs ring, operating in commercial Hindi cinema.

The drug revelations are all a by-product of the Rajput case.

His family in Bihar (a state in Eastern India and from where Rajput originated before settling in Mumbai for his film career) have always maintained that there was foul play, despite his demise being declared by local authorities as a suicide. He was found hanged in his room, reports stated.

It was disclosed that the star had mental health issues and had been taking medication for depression.

This week there were revelations that a doctor at the pre-eminent medical institute where Rajput’s autopsy was carried out claimed his death was from strangulation – but this was quickly rubbished by another doctor, who was a member of the team that carried out the actual probe, and said the other medic’s supposition was only deduced from a picture and not an actual examination.

The family’s lawyer says the probe is now singularly focused on drugs and Bollywood stars and not Rajput’s death – and is asking why?

Interestingly, many believe only Rajput, drugs and Bollywood are still making headlines everyday due to the upcoming Bihar elections, where the actor’s death will be an issue. Elections to the state assembly begin there at the end of next month and will be complete by early November (October 28-November 7). The coalition BJP government in Bihar is under pressure.

This whole saga has given rise to another major player, Kangana Ranaut, who is currently a bigger name than what she ever was or could have ever been as an actor. Ranaut has been batting on the side of Rajput.

In the last column (August), we had written about how Narendra Modi and Sushant Singh Rajput were the biggest newsmakers in India; now we can add Ranaut to this list. But the fact remains that her new-found fame is due to her tirade against her Bollywood co-stars and the way industry functions.

Rajput’s girlfriend, Rhea Chakraborty is alleged to have been part of a drugs ring and was arrested by the NCB earlier this month. Some blame her for Rajput’s death.

In turn, she reportedly named some others whom she thought could help with the NCB’s inquiries.

Padukone left the NCB offices today (September 26) after helping investigators with their inquiries; she cut short her holiday in Goa with husband Ranveer – another huge Bollywood star.

Shraddha Kapoor, Rakul Preet Singh and Sara Ali Khan and a few TV stars have also been summoned by the NCB as its probe continues.

It also was also widely reported that the NCB quizzed employees of Dharma Productions – the company owned by Bollywood powerhouse producer and talk show host, Karan Johar. He released a statement saying those questioned no longer worked for him.

Ranaut is seen as a fervent supporter of Prime Minister Narendra Modi’s BJP government, which no longer controls the state of Maharashtra (of which Mumbai is the capital) – despite having the most seats in the state assembly.

Late last year, Maharashtra fell into the control of a ruling coalition between the right-wing Shiv Sena and other BJP opposition parties.

The BJP and Shiv Sena used to be in state government together but have now parted the ways with increasing rancour on both sides.

Ranaut’s Mumbai office was demolished by the local municipality.

More recently another front has opened up – on the surface it wouldn’t be related – but just as in the SSR case, it is being seen in some quarters, as political.

Star indie director Anurag Kashyap has been accused of sexual misconduct; he vehemently denies any wrongdoing and issued a statement through his lawyer, saying the woman’s accusations are “completely false, malicious and dishonest”.

His laywer added: “It is sad that a social movement as important as the #MeToo movement as been co-opted by vested interests and reduced to a mere tool for character assassination.”

Kashyap has been a fierce opponent of Modi and the BJP government generally.

As you might expect, some are seeking their 15 minutes in the spotlight…anyone can file a report with police…and some wonder where this is all going to end.

Film shooting has slowly resumed – Akshay Kumar will be working on ‘Prithviraj’ next month. The film’s set, a replica of a 12th century palace, will be rebuilt in Mumbai for the shoot.
Anupam Kher has been shooting for ‘The Last Show’ in Bhopal.

After doing a Covid test and the result being negative, star Varun Dhawan posted a picture online saying that he was about to start shooting soon.

But the biggest production seems to be that of the TV show ‘Bigg Boss’ (India’s version of the discontinued UK ‘Big Brother’) that goes on air on October 3 with Salman Khan.

And finally, some important other considerations…

Has the splurge of films hitting streaming (or Over the Top as it is called in India – OTT) stopped?

The makers of Salman Khan’s ‘Radhe’, Amitabh Bachchan, Ranbir Kapoor and Alia Bhatt-starrer ‘Brahmastra’ and Sanjay Dutt’s ‘Shamshera’ have refused to release the films on OTT.

Will cinemas in India finally re-open and the big screen experience return?

Till next month, stay safe and enjoy your entertainment whether it be on your phone, TV or in the cinema (in the UK, anyway) and remember to catch up with all that with the Bird Eye Review Show – out next week.

Privacy & Cookies: This site uses cookies. By continuing to use this website, you agree to their use.
To find out more, including how to control cookies, see here: Cookie Policy
← Banita Sandhu: British student says I hated my skin colour (growing up) and believes opportunities better in Bollywood than UK – playing ‘stereotyped Asian lesbians’
Kiln Theatre (Tricycle) new season – ‘We’ve changed name and diversity and gender themes are bolder and prouder’, claims Indhu Rubasingham →