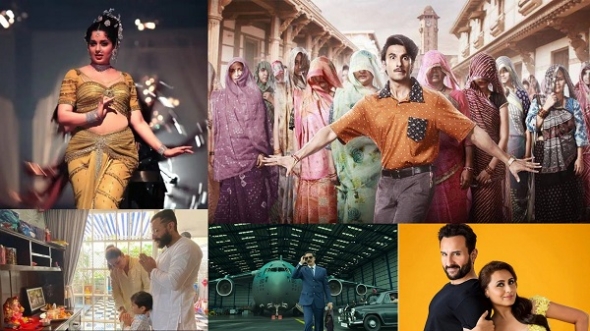 In our regular monthly review of Bollywood from our correspondent in Mumbai, the situation remains very patchy, however, online it’s a different matter, unless you are Yash Raj Films and standing firm – and everyone in the city has been in a festive mood and looking ahead…

MOVIE losses are spiralling towards half a billion pounds in Bollywood reportedly.

This is partly due to the fact that theatres in many states are running at 50 per cent capacity, whereas in Maharashtra and its capital Mumbai, they are yet to even open.

Maharashtra, which has about 1000 cinema halls, accounts for 25 to 30 per cent of Bollywood’s business. People have been also avoiding theatres because they are confined spaces, where you can breathe air that is exhaled by others who potentially, unwittingly may be transmitting covid.

Recently released films such as ‘Bell Bottom’, where Akshay Kumar plays an undercover agent, hasn’t lit up the box office.

The film, ‘Chehre’, where Amitabh Bachchan and his friends conduct a mock trial at their home was another failure. But the OTT (digital/online) sector has been booming.

Till date, 26 films, which were originally scheduled for a theatrical release, have been sold to OTT players.

Though it seems unlikely the cinema hall industry will revive soon and return to its old glory, one man is standing up to the onslaught of OTT platforms – well, it certainly looks that way.

Aditya Chopra, the chairman of Yash Raj Films seems to be hell bent on releasing his films only in theatres.

Films from his production house such as ‘Bunty Aur Babli 2’, ‘Shamshera’, ‘Prithviraj’, ‘Jayeshbhai Jordaar’ have been waiting for theatres to fully open since more than a year.

In fact, reports says that he turned down an offer by Amazon Prime Video to buy all four films for about £40 million.

It may be recalled that in March, 2021 Chopra had released his film ‘Sandeep Aur Pinky Faraar’ in theatres after rescheduling its release several times. And though the film bombed at the box office, Chopra has stuck to his resolve to not release film on OTT.

So, yes, though there’s not much to celebrate in Bollywood in terms of movies, film industry folks still had something to celebrate this month.

Yes, we are talking about the recent Ganpati celebrations – which almost every Mumbaiker, regardless of their faith or none, participates in at some level.

The festive season kicked off this month in Mumbai with millions welcoming Lord Ganesha or Ganpati on Ganesh Chaturthi and then bidding adieu to the elephant-headed God on Anant Chaturdashi – the final day when the idols are immersed in the sea.

The city’s biggest festival is celebrated with great fervour and fanfare by most film stars. And Bollywood is known for its celebrations and even parties.

The biggest Ganpati celebration in Bollywood is held at Salman Khan’s seafront pad in the suburbs of Bandra. It’s also that time of the year when bigwigs make a beeline to Salman’s house to pay obeisance to Ganpati.

The immersion of Ganesha at the star’s house is also a major attraction for hundreds of fans.

Unfortunately, Salman, who is shooting in Turkey for the third installment of the Tiger film franchise, couldn’t break the bio bubble and return to India for the celebration.

On the other hand, Shah Rukh Khan’s Ganpati celebrations are always low key. In the past, he has been photographed immersing his Ganpati in the early hours of the morning to keep the crowd at bay. He posted a picture of the Ganpati at his home on Instagram along with a message.

Sonu Sood, who’s been ‘welcoming Ganpati to his home since the last 22 years’, broke into a jig during the immersion of the Ganesha idol.

Shilpa Shetty celebrates the festival with her extended family every year. But this time around, her husband Raj Kundra and sister Shamita Shetty were missing. While the former was in prison during the festivities, the latter was participating in the reality show ‘Bigg Boss’.

This year, owing to government imposed covid restrictions, the celebrations have been relatively subdued in Bollywood.

As Bollywood enters the last quarter of a painful 2021, there’ll be more celebrations, though of the festive kind, and God willing, movie ones will hopefully follow.

If you haven’t signed up to our monthly review show looking at South Asian online/digital/OTT content – do so now!

Privacy & Cookies: This site uses cookies. By continuing to use this website, you agree to their use.
To find out more, including how to control cookies, see here: Cookie Policy
← Film stars Ayesha Omar and Yasir Hussain on the red carpet, while UK rising talent dares to dream as 24th UK Asian Film Festival gets under way…
‘DI Ray’ – New ITV cop drama starring Parminder Nagra and written by Maya Sondhi, star of ‘Line of Duty’… →