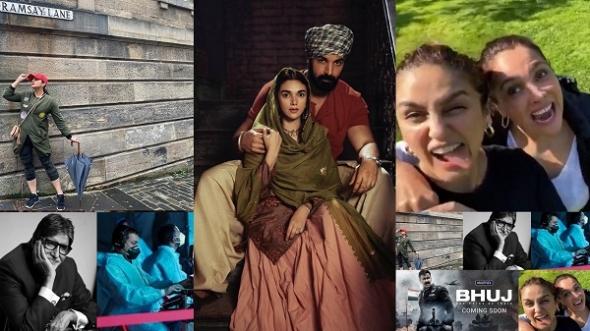 What’s been going on in Bollywood, our intrepid Mumbai cineaste has been taking the temperature…

So, UK asianculturevultures, have you been to the cinema to see Dimple Kapadia in Brit Christopher Nolan’s ‘Tenet’?

Have we turned a major corner on Bhendi Bazaar in Mumbai?

Finally, after months of relative inactivity and hesitation, film and TV shoots are gaining pace (among them a Bollywood film shooting in Glasgow) and new movies are being announced.

And yet and yet, the headlines – even front page ones – are still being dominated by the continuing controversy over 34-year-old Bollywood star Sushant Singh Rajput’s death on June 14.

An entire nation is being forced to sit through a saga and a half – of course for his family and friends it continues to be a difficult time and their distress must not be disrespected.

But for the rest of us outside his circle – it is like being forced to watch a Bollywood film and being told to take a side and decide – do you want to sit with the left or the right hand side of the theatre? Make up your mind and sit down now!

India’s top investigators, in the form of the CBI, are now looking into the reported suicide. Let’s leave this for the moment.

Scotland is currently hosting the cast and crew of the film, ‘Bell Bottom’. Not too much is known about this 1980s set spy thriller starring Akshay Kumar, Huma Qureshi, Lara Dutta and Vaani Kapoor.

Some Glasgow streets were closed for the shooting and last week Akki (Akshay) posted a six-second Twitter video of himself on the set and wearing a mask. It’s been reported that they have a doctor attached and are being constantly monitored for any possible sign of coronavirus and all filming is compliant with local regulations.

Back here – the buzz is that cinema halls may finally open up again. It is believed that the Central Government may permit single screen cinema halls to open up all over India in a phased manner from the first week of September.

But Maharashtra and Mumbai – the capital of the state – are unlikely to feature as the area still has the highest number of active cases in India.

And, even if cinema halls do open here, there is no guarantee viewers will flock to the theatres risking their lives just to watch a film.

This means new movies will continue to release on digital platforms, and there are 18 of them queueing up to see the light of the day. (See the box) – ‘Sadak 2’ with Sanjay Dutt and Ali Bhatt among them released earlier today (7.30pm IST) on Disney Hotstar.

Many of the films being sold to streaming services – better known here as OTT – have done so at a profit (see box).

Perhaps the standout film that has not gone to an OTT platform is ‘83’ – the film based on India’s cricket team winning the World Cup in 1983. It stars Ranveer Singh as Kapil Dev, and Deepika Padukone as his reel-life wife Romi and the two are one of the country’s best known married couples.

Shoots of TV shows as well as a few movies are continuing unabated, despite frequent reports of crew or cast members testing positive; star Sachin Tyagi of the TV show ‘Yeh Rishta Kya Kehlata Hai’ and its crew members were the among the most recent.

At Film City, a studio in the Mumbai suburbs, the makers of an untitled film starring Arjun Kapoor, Rakul Preet Singh, John Abraham and Aditi Rao Hydari have created a 1947 era movie set and started shooting.

Amitabh Bachchan, The Big B himself, who recently recovered from Covid-19 resumed shooting for the 12th season of his hit show ‘Kaun Banega Crorepati’ (‘Who wants to be a millionaire?’).

He also shared a couple of pictures from the shoot. Bollywood shoots have been also scheduled in other parts of the country.

New films are being announced – even though shooting schedules could remain subject to change.

Telugu actor Prabhas (of ‘Baahubali’ fame) broke the news that he will be working with Deepika Padukone in his next venture.

The as yet unnamed film will be directed by Nag Ashwin, who is best-known for a biopic, ‘Mahanati’ and Vyjayanthi Movies will be producing. It is a multi-lingual film and Ashwin told the press that it was something “no mainstream lead has done before”.

Katrina Kaif and Ishaan Khatter (who is known now in the UK for playing Maan Kapoor in Mira Nair’s BBC TV adaptation of Vikram Seth’s ‘A Suitable Boy’) are scheduled to star in the horror comedy ‘Phone Booth’.

Finally, coming back to the Rajput case; it looks like it’s going to continue for a while. There are new revelations almost every day and it shows no sign of abating amidst the coronavirus crisis.

Till next time – stay safe and keep tuned to www.asianculturevulture.com!