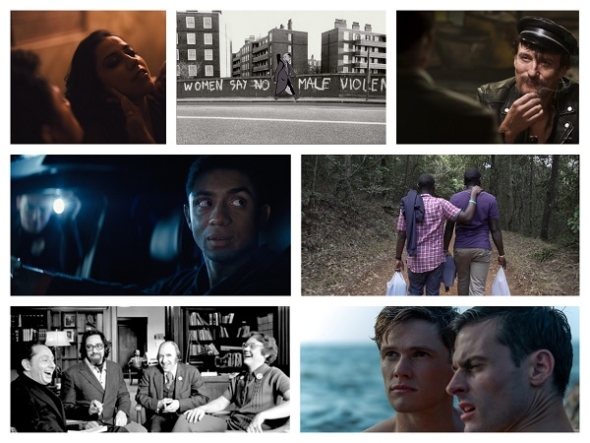 12 days of exceptional films and a wide choice…

IT IS THE UK’S LONGEST-RUNNING queer film festival and a chance for LGBTIQ+ filmmakers or films with LGBTIQ+ content to be spotlighted.

The 35th edition of the British Film Institute (BFI) Flare Film Festival gets underway today, from March 17 to March 28 as an online event and the festival is a huge highlight in the annual BFI calendar.

The festival is broken down thematically into three strands: Hearts, Bodies, and Minds – showcasing features, documentaries and short films dealing with subjects such as romance, activism, politics and identity. The are nearly 30 features and almost 40 short films from 23 countries in the line-up.

www.asianculturevulture.com spoke to Ask Kotak, writer, activist and campaigner for a London Aids Memorial and a National Aids Memorial and he selects his highlights and gives us his personal take on the festival.

He said: “BFI Flare naturally creates overall themes so it is a good summary of where we are with the Queer film narrative internationally.

“I have chosen films which stand out because of their activism, black politics and struggle for gay rights in countries where LGBT relationships are banned.”

Aids Diva: The Legend of Connie Norman
Directed by Dante Alencastre
A Los Angeles Act-Up organiser is remembered for her fierce resistance to both transphobia and the AIDS virus.

Cured
Directors: Patrick Sammon and Bennett Singer.
This documentary explores the campaign by key US activists to remove homosexuality from the American Psychiatric Association manual as a mental disorder.

Firebird
Peeter Rebane
Based on a true story, this film is a love triangle between a handsome junior officer and a fighter pilot set during the Cold War in the Soviet Air Force.

I am Samuel
Peter Murimi
This is a documentary about a young gay couple, Samuel and Alex from Kenya, where homosexuality is criminalised. (The film also screened at the London Film Festival 2020).

The Obituary of Tunde Johnson
Ali LeRoi
In this film, a young African-American man is repeatedly asked to relive the day he was shot by the police over and over again in a time loop. This feature debut is a commentary on growing up gay and black in US today.

Enfant Terrible
Oskar Roehler
It’s a fascinating portrait of filmmaker, Rainer Werner Fassbinder.
“I am great fan of his films, what he accomplished is astounding and his is an important voice to this day in films,” said Kotak.

www.asianculturevulture.com also invites you to check out…

Rebel Dykes
Harri Shanahan & Sian A. Williams
Centred around a group of women who were a sub-culture within the 1980s gay cultural scene, this is a film that explores the new at the time. These women met at the Greenham Common peace camp and using interviews, original music, animation and archive, it tells their story of how they went on to become artists, musicians and activists in London.

No Ordinary Man
Aisling Chin-Yee, Chase Joynt
A celebratory documentary and portrait of American Jazz musician, Billy Tipton, who was thought to be a man, until after his death, it became known that he was born as a female.

There is also a collection of short films available free to watch on the BFI Player across the UK, where acv spotted, ‘Bodies of Desire‘ the work of Mumbai based filmmakers, Varsha Panikar and Asawari Jagusthe (they/them).
https://www.bfi.org.uk/flare/short-films

Five of the films from this short film category are part of a partnership between the BFI and British Council and a timely reminder that ‘Love is a human right’ and invites global audiences to show solidarity with LGBTIQ+ communities around the world and view the films via the British Council’s Arts YouTube channel. Audiences are also invited to vote for one of their favourite film from this selection via a British Council web poll. https://www.bfi.org.uk/flare/five-films-freedom

Apart from being exposed to great cinema, the festival was an opportunity for the LGBTIQ+ community to meet up at the South Bank by the river as an alternative to most LGBT social spaces that were centred on clubs and nightlife. Although there are no live events, BFI Flare has created the festival atmosphere by offering free screen talks available worldwide on BFI You tube and BFI Flare face book. https://www.bfi.org.uk/flare/events

She said: “Facing the first lockdown last Spring, and with days until launch, we moved BFI Flare online – one of the first Festivals around the world to do so. Now, a year on, we are launching our second digital edition and Flare’s spirit of community, solidarity, defiance and celebration is more precious than ever, and we’re excited to be able to share that with audiences everywhere in the UK.”

Another regular feature was the Club Kali after party where DJ Ritu’s distinctive Hollywood to Bollywood soundtrack attracted a cross-cultural audience, and for this year, she has created a special playlist which can be found on Spotify, so you can still party at home!

Tickets are available on the link below and you can watch the films anytime during the festival during a four-hour window.

Privacy & Cookies: This site uses cookies. By continuing to use this website, you agree to their use.
To find out more, including how to control cookies, see here: Cookie Policy
← London Film Festival 2020: ‘Mangrove’ – Moving and timely slice of British history… (Review)
London Film Festival 2020: ‘Mogul Mowgli’ – Riz Ahmed: “This is an unapologetically brown film, unapologetically bold in its creative vision” →