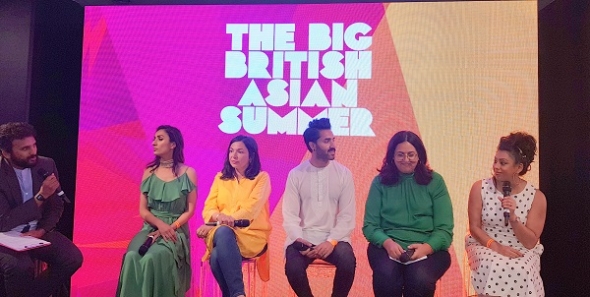 AWARD-WINNING presenter Anita Rani and leading journalist Mobeen Azhar were among a handful of top flight media personalities who helped to launch the BBC’s ‘The Big British Asian Summer’ yesterday.

The channel will present a series of programmes about Asian life in Britain over the summer (August 6-26) – and will also unveil the findings of one of the largest surveys to date – quizzing 2,000 British Asians about their beliefs on a range of issues.

An invited audience made up of contributors, programme makers and prominent media personalities – among them Dr Ranj Singh and Preeya Kalidas – heard Patrick Holland, controller BBC 2 welcome them, to the Oxo Tower on London’s South Bank, for the formal launch.

Following a short trailer announcing the whole season, there was a panel discussion featuring Rani, Azhar, Dr Yasmin Khan, who presents ‘A Passage to Britain’, which looks at how some of the first migrants from the subcontinent in the post-war colonial period fared in Britain; Fatima Salaria, BBC commissioning editor and Jazz Gowans, who runs Transparent Television, an independent production company that has made programmes in the season, and the debate was moderated by Nish Kumar, comedian and presenter of BBC2’s ‘The Mash Report’.

While the audience was shown clips of some of the individual programmes, and there was a general discussion about why and what the BBC was trying to do with such a season, there was a note of criticism in the Q&A part with the audience, about why none of the content was earmarked for BBC 1.

Salaria, who looks after BBC religious programming, defended the corporation and said BBC2 was the rightful home for this type of content.

“It’s a thoughtful and thought-provoking channel,” she argued.

“We have produced content for a range of platforms.”

Azhar disclosed snippets from the survey and said one of the findings showed that many young Asians shunned traditional channels, and were only engaged digitally or with the BBC Asian Network.

He said that in his own experience fronting late night phone-in programmes on the BBC Asian Network, he had been exposed to some opinions outside those of the broad ambit of British values (mostly liberal) – especially on personal relationships and morality.

The audience were also shown a moving and highly emotional clip from ‘A Passage to Britain’.

Interviewing a second generation British Asian, Dr Khan asked her subject whether her late father, who had left the subcontinent to seek out a position as a hospital consultant in Britain had achieved his ambition.

Her interviewee’s teary and awkward expression tells her father’s heart-wrenching story without a single word even being uttered.

“That was my first day of filming,” revealed Dr Khan, who as an academic has not fronted a TV programme before.

Rani’s programme on Bollywood looks at how much Indian cinema has changed over the decades.

A clip shows her talking at a party to a group of white British dancers who are all working in India on Bollywood films and enjoying the experience (as well as the all expenses paid arrangement).

Rani said she and others in the series, got the chance to tell the stories they wanted to and in the way they desired as well.

This is a continuation of a theme that came from her programme on Partition, ‘My Family, Partition and Me; India 1947’ and for which she got her Royal Television Society Award and an Eastern Eye Arts, Culture and Theatre award, more recently.

Gowans pointed out that she was one of the few working-class women (from the Midlands) to have worked on the programmes, but she did not think about it consciously, and felt the BBC was nurturing and a place where talent could succeed – a view echoed by Kumar who reminded the audience he had fronted a mainstream satirical programme, having come through radio as a stand-up initially.

Jazz Gowans of Transparent Television talks about her experience as a producer on ‘Supercar, Superfam’

Contributors were at pains to stress that this was not just a season of programmes where Asian content had been confined.

They said the BBC continued to be open to stories from the UK’s diverse communities and Rani stated: “The season is all about telling stories that are not just about being Asian but about being British.”

Salaria said, as a senior BBC executive, she was fiercely proud of the programmes.

Guests were entertained later by DJ Bobby Friction who played a special set and also fronts a programme on bhangra in the season.

Season highlights (dates and further detail, unless stated, unavailable at this time and subject to change – please check schedules and LIKE ACV FB for updates…

●BBC Asian Survey likely to be released early August with the live Big Debate on the BBC Asian Network on August 16
●On BBC2, ‘The Big Asian stand-up’ includes Tez Ilyas, Emily Lloyd-Saini and Ahir
●Riz Ahmed, the Emmy-award winning actor, is interviewed by Nikki Bedi in ‘Riz Ahmed: Road to Englistan’ (wt). The actor is currently writing ‘Englistan’ a multi-generational drama for BBC2 and in this programme, he talks about his upbringing and negotiating the (very) different worlds he inhabited. The programme is followed by a screening of what many believe was his Hollywood breakthrough film, Mira Nair’s ‘The Reluctant Fundamentalist’
●Meera Syal, the actor and writer, has recorded a very personal introduction to the screening of her ‘Anita and Me’ (2002), which was adapted from her best-selling book of the same name and now features on the GCSE curriculum.
●‘Supercar, Superfam’ on BBC Three looks at the lives of Kash and Shabs, two brothers who own a supercar workshop in Essex. Social media stars in their own right, Kumar said the line, ‘Despite owning more than a million pounds worth of cars, the two brothers live at home’, illustrated British Asian life as well as any other. It looks set to go out on August 16.
●Generation smackdown’ will be broadcast on Twitter and Facebook and is series of four programmes about of five minutes exploring intergenerational attitudes.
●‘My Asian Alter Ego’ for BBC Three, looks at those who choose to put their lives very much online and how much that might differ from their ‘real-world’ personas…in a world of complex and sometimes shifting multiple identities
●‘Pump up the Bhangra’ is a programme earmarked for BBC Four, and is fronted by DJ Bobby Friction. It tells the story of bhangra in Britain and features interviews with many of the leading names who made it what it is today.

Privacy & Cookies: This site uses cookies. By continuing to use this website, you agree to their use.
To find out more, including how to control cookies, see here: Cookie Policy
← ‘Mary, Queen of Scots’ Tremendous turns from Saoirse Ronan and Margot Robbie make for compelling watch…(Review) International Film Festival and Awards Macao
Shekhar Kapur and other International Film Festival and Awards Macao (IFFAM2018) gems… →