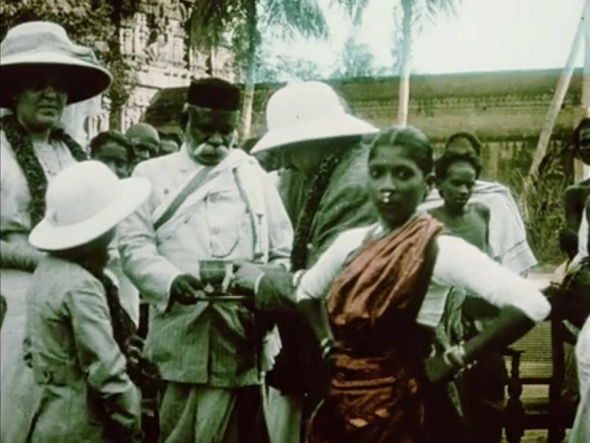 THERE is something quite exciting about watching old film-footage as you never know where it is going and using archive footage to tell stories is a big part of the film tradition in the UK.

Archive material, according to the experts who work in heritage institutions, is “an important piece of the jigsaw which makes our national memory”.

Now filmmaker Sandhya Suri has made ‘Around India with a Movie Camera’ documentary using film footage about India which was recorded during the years of 1899-1947.

The footage is a mixture of home movies, newsreels, propaganda pieces, early film footage to give an overall narrative about India and its evolution from a colonial domain towards an independent nation.

Suri was commissioned by the British Film Institute (BFI) National Archive as part of an Unlocking Film Heritage project to look at around 50 hours of film footage. She then had to weave it into a film and create more of a narrative.

She told www.asianculturevulture.com: “I was thrilled to be approached to work with the BFI National Archive.

“We started off with a long list of over 130 early around 50 hours of footage in total. It dated from 1899 to 1947 and ranged from silent film shot by amateur filmmakers to glorious Technicolour films shot by cinematographer, Jack Cardiff in the 1940s. (He worked on great films such Powell and Pressburger’s, ‘Black Narcissus’, 1947 and ‘The Red Shoes’, 1948, among others).

“I personally love archive because ‘Around India With a Movie Camera’ is not just about colonialism it’s about the fact that every time you look at the footage the past comes alive.”

All sorts of narratives emerge.

First of all there is the British Raj in all its hues and the incredible insight into a bygone age and a lifestyle that ended after Independence. Most of the people in these films are no longer with us.

The past comes alive in an amazing way, she explained.

A young Maharajah sits on his throne

If you haven’t seen her film ‘I for India’, www.asianculturevulture.com would urge you to seek it out.

It’s a fascinating look at England seen through the eyes of her father, Yash Pal Suri, a doctor who came to the UK in 1965, leaving behind her mother, Susheel and an older sister, back in India to come and work in Darlington.

In order to keep in touch with the family back home, he bought two super 8 cameras – one he sent to his relatives and the other he used to make home movies about his life in England and these films were like cine-letters. “My dad always documented, he was understanding and bearing testimony,” explained Suri.

It is an amazing chronicle of the immigrant story and you can see where Suri’s love for the documentary form might have come from. Suri, initially studied Maths and German and then learnt filmmaking at the prestigious National School of Film and Television, Beaconsfield.

‘I for India’ which premiered in the World Competition section of the Sundance Film Festival, was shown at  over 20 international festivals and gained many awards before going on general release in 2007.

A rickshaw ride for Memsahib

She went on to work in international development and at the film unit for Oxfam in UK.

Today, she teaches on the MA in cinematic non-fiction at University College London (UCL)  and is working towards making her first feature length fiction, ‘Santosh’, for which she was selected to participate in the Sundance Lab in 2016 , where she met Robert Redford  whom she describes as ‘really amazing, brilliant mentor’ as she was learning how to work in fiction for her first feature.

She has just shot a short film, ‘The Field’, set in Haryana about a female agricultural day labourer.

But back to ‘Around India with a Camera’, and without ruining your fun and giving too much away, the film begins with what is considered to be one of the earliest images taken by the Warwick Trading Company in 1899 and for hundred years it has been called ‘Panorama of Calcutta’, but it’s obvious that is the Benares Ghats and this mistake has now been corrected.

Suri is following a loosely chronological narrative structure but she does mix up the montages and through this you can see the different approaches the British had to India.

Other means of transport were available…

We see the pomp and ceremony of the Delhi Durbar in 1911 which is how they established their rule, followed by painted images of tribal people which have an “exotic and travelogue look”.

It’s a fascinating insight into a past and sometimes a present India. Then we have images of an Indian woman washing her baby in 1906, playing with the child and giving it a massage – something which occurs even now!

Some of the films have intruiging anthropological captions like: “In some parts of the East the natives lives much in the open. His bed occupies a position outside the front door” and we see a man on charpoy!

Later when sound was finally added you can hear the narration and the cut glass accent of the narrators, something which would make many voice over artists today keel over with laughter!

According to Suri one of the most repulsive bits she found was where a Salvation Army woman gets a tribal woman to renounce her culture. She takes off all her adornments like necklaces and bangles ( But this footage is against the backdrop of the Criminal Tribes Act in India — one of the pieces of British colonial legislation that believed that certain tribes or people were predisposed to committing acts of criminality).

There is the gloriously beautiful Technicolor. ‘Temples of India’ shot by Jack Cardiff and sound is now part of film, juxtaposed with Mahatma Gandhi marching to pick salt at Dandi to break the salt monopoly.

Soumik Datta has composed the music

By watching the whole documentary there is a greater understanding of the British view of India and the culture of film itself.

Suri’s favourite bits of archive amongst the 50 hours she has viewed are the home movies of the British in India, such as the manager in his garden, a young girl is just playing and she dresses up in a sari and a very posh garden party in Calcutta (Kolkata) which looks like a scene from the Channel 4 drama, ‘Indian Summers’.
Why should we watch it?

“Just for the footage itself, some incredible footage, great breadth, dance sequences, depth and beauty of a travelogue,” she enthused.

“If you’re after every cliché of India, it’s all there.

“For me and for Asians, this film is the colonial relationship in different forms between the British and India/ns and the evolution of that relationship over time.”

The documentary also features an original score composed by Soumik Datta and was commissioned by BFI as part of the UK-India Year of Culture in association with British Council.

The film will be available on BFI Player from February 26 as a rental title.
Screening at the BFI Southbank
Saturday, February 3 at 15.45pm followed by Q&A with director
Other screening dates Monday, February 5 at 6.40pm; Wednesday, February 7 at 2.30pm and Saturday, February 11 at 4pm
Duration 72 minutes and certificate TBC. Tickets from £8.00 Box Office: 020 7928 3232 or online.

*You can see more Suri’s own film, ‘I, India’ on http://www.iforindiathemovie.com/

Privacy & Cookies: This site uses cookies. By continuing to use this website, you agree to their use.
To find out more, including how to control cookies, see here: Cookie Policy
← Toronto International Film Festival 2019: Dev Patel in ‘The Personal History of David Copperfield’ (tonight; early hours UK)
‘Baahubali – The Beginning Live’ comes to the Royal Albert Hall, with a full orchestra and stars Prabhas, Rani Daggabuti, Anushka Shetty, director SS Rajamouli and composer MM Keeravani and here’s your chance to see it for free…(p) →