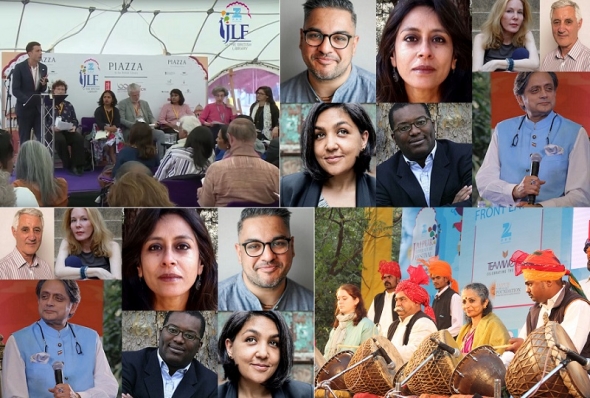 Authors from all corners of the globe, literary superstars to debut poets, it can only be the Zee Jaipur Literature Festival…

IT’S OFTEN referred to as the greatest literary show on earth and it’s coming to London again.
The Zee Jaipur Literature Festival pitches up its tent at the British Library, King’s Cross this Friday (June 8) until Sunday.
We’ve picked out some special highlights from the 110 eminent writers and thinkers appearing in London this weekend for the festival – which draws over 250,000 people to Jaipur over five days. We were in Jaipur earlier this year. See here.

*5.30pm- Imaging our world
Sees the festival open with Namita Gokhale and William Dalrymple, festival co-directors and Sanjoy Roy, producer and Teamwork Arts head and Baroness Tessa Blackstone, chairman of the British Library, welcome guests to what will be third edition of the festival in London. Head to the Durbar Theatre.

*6pm – Opening address – India Sutra: Why I am a Hindu
Shashi Tharoor’s new book is a sustained argument about Hinduism (among the oldest of surviving belief systems) being very much in tune with a 21st century pluralist and liberal social democracy. The former diplomat and now Indian Congress MP and writer, electrified audiences at JLF in Jaipur earlier this year. ACV was among those listening. Here’s an opportunity to see him and hear him make the case for Hinduism as a progressive force in the West and among the diaspora.

*1.15pm – The Storytellers: Preti Taneja and Anuradha Roy
Two exceptional writers get a chance to share their thoughts and feelings with you! Taneja’s ‘We That Are Young’ is a book we have championed from the outset. Taneja’s very Indian and modern take on the classic Shakespearian tale of ‘King Lear’ is a scintillating read and we have no doubt its breath-taking and urgent sweep will only gather momentum, not lessen over time. Arunadha Roy is a prize laden-writer and deserving of every accolade heaped upon her – her latest novel, ‘All the Lives We Never Lived’ again explores the lives of women often at the margins and intentionally marginalised. Both writers cover the big picture of societies in flux, the dangers to democracy and the sometimes quite fragile state of gender relationships. For anyone interested in India and how progressive forces can effect positive change everywhere, this is must attend session by two exceptional writers. They both will be in conversation with Georgina Godwin. At the Mughal Courtyard.

*2.30pm – Cricket and Nationalism
Mike Brearley, England’s most celebrated cricket captain of recent times and a much respected thinker on leadership, joins Tharoor and Ashok Ferrey to discuss how cricket – India’s most popular sport – affects the mood of the country and plays into political discourse with the rise of nationalist politics. The three eminent commentators will share their thoughts with moderator and former Times of India London chief, Ashis Ray.

*3.45pm – 100 Years of the suffragette
100 years after women were given the vote in the UK, why is it women continue to be discriminated against and made to feel like second-class citizens? Helena Kennedy, barrister, and campaigning Labour peer, Anita Anand, broadcaster, and biographer of Sophia Duleep Singh, an Indian royal turned revolutionary who was among the early suffragettes and prominent science writer Angela Saini discuss the issues with Bee Rowlatt, an author on a book about Mary Wollstonecraft, of the first and great English feminists. Head to Pavilion Piazza and hosted in collaboration with Asia House.

5pm Jan Nisar and Kaifi
* Two iconic names – one beautiful subject, Urdu poetry.
Shabana Azmi is one of India’s best-known actresses and has featured in many UK and US productions too – including ‘Next of Kin’, which most recently screened on primetime ITV in Britain. Husband Javed Akhtar is a famous (Bollywood) lyricist and the son of the late poet Jan Nisar Akhtar; Azmi’s father, Kaifi was also a famous radical Urdu poetry titan. The couple along with Saif Mahmood read and discuss the state of Urdu poetry in India. The Durbar Theatre will be your witness.

Tishana Doshi, one of India’s young and upcoming literary voices reads and performs

*6.15pm Girls are coming out of the woods
India’s young poet performance sensation Tishana Doshi brings her particular brand of fire, fury, softness and light to the British Library. She is introduced by Janice Pariat. This session is in the Mughal Courtyard.

*10.45am Subhas Chandra Bose’s death
A long-running controversy and still the subject of huge speculation – what happened to India’s other freedom fighter. Bose disavowed the non-violence of Mahatma Gandhi and others, preferring a more strident and assertive Indian nationalism, helping to create and then lead an Indian National Army to oppose the British and wage a war of independence. He also favoured an accommodation with the Japanese but died from burns sustained in a plane crash in Taiwan in August 1945.
Without any apparent body to display, rumours abounded and some believed Bose met another fate altogether. Author, eminent journalist and relation Ashis Ray wrote a book last year investigating several theories and concluding that his much respected (until the accommodation with Germany and Japan) uncle did indeed die in a plane crash. He will debate the book with Anita Bose Pfaff, Bose’s daughter from an unacknowledged relationship with Emile Schenki. Pfaff is an economist based in Germany and has made few public utterances about her famous father. This session takes place at the Piazza Pavilion.

*10.45am Initiations – Writing Race Kayo Chingonyi and Nikesh Shukla in conversation with Prajwal Parajuly
Nikesh Shukla’s 2018 novel, ‘The man who destiny’ is a kaleidoscopic work, based on four characters whose lives are intertwined. Shukla is active on the issues of publishing and diversity (or the lack of it within the industry) and was the editor of ‘The Good Immigrant’ a huge commercial and critical success, and which he developed from scratch and is now spinning off a new literary journal and literary agency.
Kayo Chingonyi is a poet and his first full-length collection, ‘Kumukanda’ featured in both The Guardian and Telegraph book of the year lists and won the Swansea University International Dylan Thomas Prize. Prajwal Parajuly is the acclaimed author of ‘The Gurkha’s Daughter’ and ‘Land where I flee’ And was a judge on he 2017 International Dylan Thomas Prize. This is in the Durbar Theatre.

*2.30pm Behind the Beautiful Forevers
Katherine Boo’s prize-winning book of the title is a deep exploration of the hopes and fears of real people living in a Mumbai slum close to India’s international airport. Adapted by the National Theatre on the Southbank, it charts the fate of Abdul who becomes falsely accused of murder – and sees his dreams turn to a nightmare, in an India riven by old prejudices and gathering fear, destroying innocent and fresh hopes of social mobility and economic independence that seemed to usher at the dawn of the 21st century.

Mukulika Banerjee, director of the South Asia Centre at the LSE, moderates the discussion about Winston Churchill

*5pm Churchill Hero and Anti-Hero
In Britain (and England especially), he remains a gigantic figure and totem of all that is proud and worthy of people from ‘this sceptred isle’; in the subcontinent, he is reviled as a politician who believed in Empire and stands accused of starving many in India, to protect the Imperial project. Five very distinguished people come to discuss his legacy – Tharoor, Kwasi Kwarteng, British MP and writer; Zareer Masani, historian and Indira Gandhi biographer; David Edgerton, Hans Rausing professor of history of science and technology and professor of modern history at King’s College, London; and the three will be held in check by moderator Mukulika Banerjee, director of the South Asia centre at the London School of Economics.