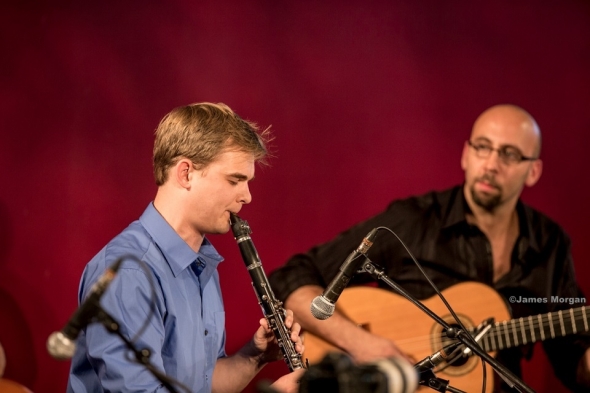 INDIAN CLASSICAL music, much like its western counterpart, gets a bad press, especially among the young.

So, it was heartening to see quite a few young people attend the series of concerts that made up this year’s four-day Darbar Festival which concluded on Sunday (September 22) on the South Bank in London.

In fact, most of the events were either sold out or very nearly full – even for the 10am morning raga concert on the Saturday morning.

This year the emphasis was on women, whom until quite recently were not encouraged in India, to play publically.

Of course, as we all know most of the rage in the West is for Bollywood tunes, but any lover of music cannot fail to be stirred by the performances or the quality of the concerts of Darbar 2013.

Sandeep Virdee, Darbar Festival director told www.asianculturevulture.com: “It was a huge success for our partners and for our audiences – many concerts were sold out in advance and we got a five star review in the London Evening Standard. The quality of the music was very high. I am really pleased that we were able to showcase Indian classical music in its entirety and purity.”

Perhaps, a particular delight in this respect was the free public concert staged at the Front Room of the Queen Elizabeth Hall on Saturday early evening.

Shankar Tucker (pictured left on this page), an American-raised clarinet player, who has spent time in India, enchanted the audience with his compositions and for nearly an hour and half, not a person stirred (apart from in appreciation) or left the packed hall.

Ably accompanied by four other outstanding musicians, the performance was memorable for its range, energy and at times, virtuoso displays of musical ability.

A particularly appealing aspect of this style music is where two instruments hold a deep and at times hypnotic argument with one looking to outdo the other.

Alongside Tucker were Guliano Modereli (pictured right on this page) on guitar, Harkiret Bahra on tabla and RN Prakash on mridangam (which we believe is the generic term for any drum-like instrument – in this particular concert Prakash, who was a knockout performer, played what looked quite like an earthen pot).

But the sounds that came from those nimble fingers against the hollow clay material were spectacular, almost mind-blowing.

Vocalist Nina Burmi joined the four for a final set, but the quality and dynamism of the previous sets overshadowed this.

Especially memorable were Tucker’s ‘Night Monsoon’ composition, inspired by his stay in Mumbai during the season of wind and rains.

Equally impressive was Modereli’s own composition which included an extended guitar solo, soft, melodious, and slightly mournful, it was further evocative with the grey skies and looming rains outside. Inside, sheltered as we were, we could feel bright and energised by music of such force, strength and skill.

Look, we’re not heavy on classical Indian music – we don’t know much about it, haven’t listened to a great heap and have only a very rudimentary knowledge of the medium but every concert we went to was exhilarating and uplifting.

From our first encounter on Friday (September 20), at ‘Great Improvisational Expectations’ to our last formal engagement with the talk on ‘The Betrayal of Saraswati Veena’* on Saturday, there was music to move you, educate you, and leave you utterly mesmerised.

It started with ‘Great Improvisational Expectations’ and leading this afternoon session of ragas was the hugely versatile and accomplished musician Debashish Bhattacharya on slide guitar.

Majestic and regal (Darbar refers to the court of kings, where such music originated), he was complimented immensely by Yogesh Samsi on tabla.

Intense and incessant during periods, the two were ‘in the zone’ and communing with the gods as they are meant to in classical theory – the amusing note for us, was that Samsi looks so much like an accountant with his greying mane, bald forehead and glasses, it’s hard to equate the man with the music that emanates so manically from his tabla at times.

The two were also supported in the beginning by British Asian musician Unnati Dasgupta on Tanpura. She is working on an her own album in India and hopes it will be released next year.

From there, it was onto Jayanthi Kumaresh (pictured on the home site page) who is one of the stars of Indian classical music and plays the ancient Saraswati Veena.

Joined by Patri Satish Kumar on mridangam and RN Prakash on ghatam, Kumaresh plays the veena with an elegance and poise that befits of a woman such distinction and talent.

A musician since the age of four, who learnt her craft, under the tutelage of both her maternal aunt, Padmavathy Ananthagopalan and uncle, Dr S Balachander, both celebrated musicians in their own right, she gave a commanding display of an instrument that has fallen out of favour in its homeland.

Organised as one of the unplugged Darbar concerts in the intimate setting of the level 5 Function Room of the Royal Festival Hall, the concert was especially atmospheric with the backdrop of dusk, leaden skies, and the bruising, intrusive sight of technology in the form of The Starflyer.

We were above it all – literally and metaphorically with Kumaresh taking the liberty of opening the floor to questions and concerns and engaging with her enthralled audience.

No sooner had we had the echo of Kumaresh’s reflective and poignant notes leave us than we were back for the morning ragas as vocalist Manjusha Kulkarni-Patil made her UK debut.

Accompanied by Tanmay Deochake on harmonium and Akram Khan on tabla, she kept the audience rapturously engaged for just shy of two hours, as the morning ragas became afternoon ones.

Her vocals performed in the Khayal style may not be to everyone’s taste and the morning began slightly slowly and austerely, but warmed up reaching a hoopla-ing crescendo for the audience, and ending with two more populist style bhajans (religious songs) delivered in Hindi and Marathi, respectively.

Darbar appears to get bigger and better every year and by the looks of things is not seeking too many more converts, but these traditions and talents will only flourish further with love, support and understanding from a younger crowd.

Darbar artistic director Sandeep Virdee did a wonderful job of recruiting such talent and over the years more young people in the UK have been introduced to these instruments and styles, but the work is far from done or over, but bravo for putting Indian classical music on the centre stage at one of the country’s most prestigious music venues.