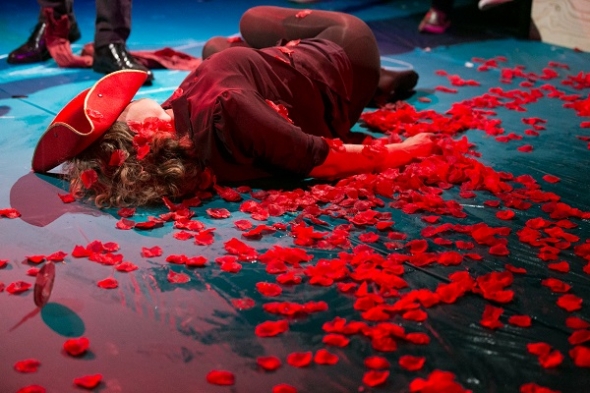 Allegorical in many ways, this play with our leading man is different to conventional drama…

THE LAST time www.asianculturevulture.com saw actor Zubin Varla was when he was playing Dara Shikoh, eldest son and heir apparent of Emperor Shah Jehan in ‘Dara’ the play at the National two years ago.

Now Varla is performing at the Gate Notting Hill, an intimate theatre above the Prince Albert pub near the said tube station. He is performing in, ‘The Unknown Island’, a play adapted from a short story by Portuguese Nobel prize winner author, José Saramago and directed by Ellen McDougall a new artistic director at the venue.

On the face of it, it is a simple allegorical story about a man who petitions the king to give him a boat, so he can go and discover an unknown island. Four actors enact the story word for word while the audience sit at the edges of a long rectangle room, which has been coloured blue and features a small red caravel ship in the middle on a box.

The King is not used to being asked for anything and the man lies down in protest in front of the door for three days before it is opened by the cleaning woman so the petition can be heard. Surprisingly the King gives him a boat, but doesn’t believe there are any more unknown islands left to discover as all the islands have been discovered and are on the map.

José Saramago, he explained, was a dedicated member of the Communist Party who believed that human begins are casualties of a socio-economic system and born within structures which defines them and can’t free themselves.

Varla has done some research around this story, so he is able to fill www.asianculturevulture.com in with the essentials.

Saramago, had a working class background, and was a landless peasant, Varla said.

“He worked as a car mechanic and later became a journalist and then acquired notoriety as a writer. His concerns were about those who have and have not, and this is always present in his writing.”

So, in ‘The Unknown Island’, the author is always questioning the Party, via the innocent observations of the protagonists that belie the depth of the truth that is being told, he explained.

The big idea of the play is whether it’s possible for people to imagine a new way of living with none of the systems, structures, injustices and hierarchies that currently exist. The story is very short and you can read it below.

The play has a lot of humour and is about human relationships and emotions. The cleaning woman who opens the door to him is inspired by the man’s request and decides to give up her boring job and join him.

Along with Zubin Varla, the other performers are Jon Foster, Hannah Ringham and Thalissa Teixeira who play all the parts and at one point the audience are invited to share in the bread, wine and olives which are the provisions of the couple as they head out to sea.

So, is it very different performing in a small space?

The only difference is size and to be slightly vocally wise, he laughed. In terms of storytelling it has to be as present and as truthful. ‘Dara’ had no direct address to the audience, but this show is all about that.

Varla, who is of Parsi Indian heritage, trained at the Guildhall School of Music and Drama has been working professionally for over 20 years. He played the seminal role of Saleem Sinai in the Royal Shakespeare Company’s production of ‘Midnight’s Children’ in 2003 and he has recently worked at Shakespeare’s Globe in ‘A Midsummer Night’s Dream’ directed by Emma Rice.

He worked on two episodes of the US TNT series, ‘Will’ helmed by Shekhar Kapur, but his episodes were directed by Elliott Lester. He is about to do ‘Deep State’ a contemporary espionage thriller for Fox Europe, and will also appear in a play at the Orange Tree Richmond called ‘Poison’ which opens in November.

Varla comes from an artistic background, and is proud of the achievements of his parents, who have inspired him through their own dedication. His father, Minoo Golvala was an opera singer, with an extraordinary life, he recounted.

Golvala senior used to watch Mario Lanza movies in Mumbai and fell in love with opera and classical music. He then left India aged 23, went to the Coliseum in Rome and later performed at Glyndebourne Opera.

His mother, Sunita Golvala, was given an MBE earlier this year for services to South Asian dance. When Zubin entered the profession he slightly shortened the family name as people were always ‘tripping up’ over the pronunciation.

‘The Unknown Island’ is a beautiful, inventive and rebellious adventure story about dreaming of the impossible and trying to cross the vast distances between ourselves and each other, and runs until the end of this week.