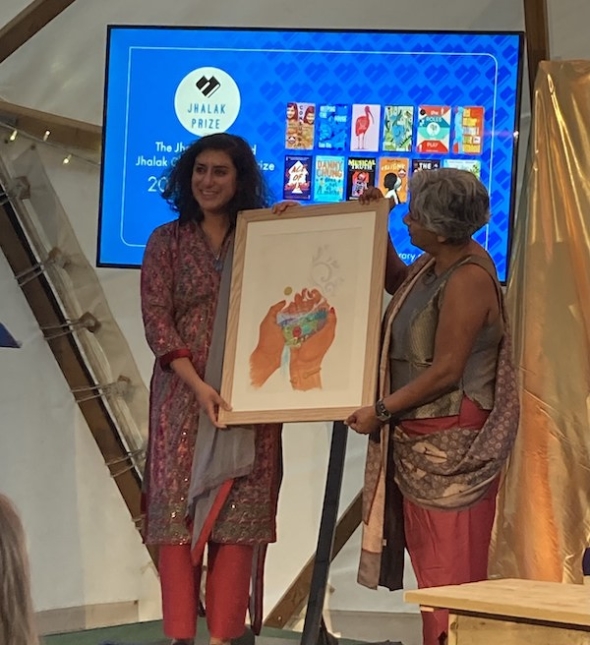 Sabba Khan and Maisie Chan win the awards this year…

SABBA KHAN’S graphic novel ‘The Roles We Play’ was the first of its kind to win the Jhalak Prize for best book by a writer of colour, whilst Maise Chan’s ‘Danny Chung Does Not Do Maths’, illustrated by Anh Cao, won the children’s and young adult prize.

Writer and journalist Bee Rowlatt introduced co-founder Sunny Singh to present the awards, which took place on Thursday (May 26). The trophies for the winners this year were Jhalak artist residents Elijah Vardo for best book and Rikin Parekh for children and YA (Young Adult).

Khan’s novel explores her identity as a second-generation British Pakistani Kashmiri, after her family were amongst those people displaced from Mirpur in Kashmir and where 70 per cent of British Pakistani’s can trace their roots back to. Khan posted a video on Instagram yesterday (May 29), saying she couldn’t believe the result. “A little video of Thursday’s wild news. It still hasn’t properly sunk in.”

She added “What do you do when your graphic novel has won a literature prize?”

Khan’s work as a visual artist and graphic novelist was boosted by her architectural training at Central Saint Martins and the University of Westminster, and she mixes her architectural knowledge into her art practice.

Judge Mary Jean Chan described Khan’s book as “a powerful, moving and thought-provoking story which shimmers with hard-earned wisdom and wonder, one that is beautifully written and vividly drawn”.

Another judge, Chimene Suleyman praised Khan’s skills as a storyteller “she’s an impeccable storyteller who commands the page in every way”.

Maisie Chan’s novel follows an 11-year-old boy who loves to draw, but whose life drastically changes when his maths-obsessed grandmother visits from China.

The children’s and young adult judge Patrice Lawrence loved the books for its “warm-heartedness, humour and nuanced way it approaches the challenges of being a child negotiating multiple identities”.

The Jhalak Prize aims to recognise authors who feel marginalised and welcomes UK entries from a wide range of genres: fiction, non-fiction, short stories, graphic novels and poetry, and is open to self-published authors.

In this vein, an anthology of work created by artists of African, Caribbean and South Asian heritage named ‘Runaways London’ was handed out on arrival at the awards. The project, undertaken by historians Professor Simon P. Newman and Dr Peggy Brunache, of University of Glasgow, aims to empower these creatives to respond to the histories of London’s freedom-seekers in the 17th and 18th centuries, and to raise awareness of a lesser known section of history.