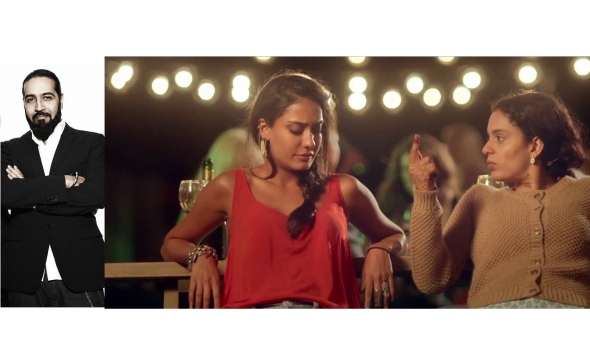 Sunny chews over the cinema comings and goings this month…

Sunny Grewal (pictured left above), one half of the radio partnership that is Sunny and Shay (his wife) – and with her, they both host the Sunny and Shay show on BBC London 94.9FM, every Sunday between 6pm and 8pm.
Sunny, a massive film buff and nascent actor-director, will be giving www.asianculturevulture.com his thoughts on the films he has seen every month and the ones he’s most looking forward to seeing…

Right, just to recap quickly about my Oscar predictions last month – I got five out of six, which isn’t bad at all. We’ve got our fingers on the pulse. The only one I did not get right was best director award for Alfonso Cuaron for “Gravity”. I didn’t even put him in the running and though a great director Alfonso directed a very technical film – good, but heavily reliant on the special effects. We all know who I would have liked to win the Oscar and if you’re not sure, then do read my last column on the Oscar predictions. They are here.

Okay, now to the films I’ve seen this month.

“Gunday” – It was everything I expected it to be, it lived up to its billing. I wasn’t surprised, I wasn’t disappointed, everything that I knew I was going to get, I got. It’s always worth looking at the trailers – then you know what you are going to get. Two men oiled to the hills with their six packs going against the odds – action movie for the guys and the gals!
Sunny rating: 5/5 Chillies

“Highway” – This film is more like an independent movie than a Bollywood production. (It premiered at the Berlin Film Festival last month, www.asianculturevulture.com reviewed it here). There are outstanding performances: Randeep Hooda, the male lead is a classically trained theatre actor and it shows.
Alia Bhatt (a rising star after her debut in the hit, “Student of the Year”) is also really good. If you want a break from traditional Bollywood, this is the film to see. It’s been done before with “Kal Nayak” starring Sanjay Dutt and Jackie Shroff.It’s about Stockholm Syndrome (a recognised condition whereby hostages identify and sympathise with their captors). We’ve been here before – but not with such a character driven story. It’s very clever scriptwriting. I’ve heard the criticisms (about it dealing with controversial subjects such as child abuse) – but when it comes down to storytelling and challenging the status quo, it’s always worth it.
This is about something that happens – it’s not shying away from difficult topics – it’s bringing it to the forefront. We don’t blame Hollywood for doing that – look at “12 Years A Slave”. I commend the filmmakers and the courageousness of the actors for taking it on. It’s definitely worth watching , it’s very HOT, HOT.
Sunny rating: 5/5 chillies

“Robocop” – Unfortunately it was not everything I expected it to be. Go and watch the original – which is as violent as anything! Robocop did not have a conscience, he was a machine and the consciousness came later on – what they did in this version, was they gave him a conscience too quickly and he was too soft. He was a PC Robocop – as far as I am concerned, let’s just take away the humanity, so that we can get back to the shooting and revenge, that’s what we wanted to see. He’s just not scary now, when he turns up in the original movie you know something is going to happen, something HORRIBLE, but in this it’s like, are you going to hold a cup of tea?
Gary Oldman did not disappoint and Samuel Jackson was hilarious as a commentator of a TV programme but it could have been a lot better. Don’t waste your money – go and see something else, I am sorry.
Sunny rating: ½ /5  popcorns

“Monuments Men” – There were too many big actors and too many big names. Unfortunately they did not all gel together. Individually their performances are outstanding, and the film had a good premise to it (about a squadron of soldiers protecting works of art from falling into the hands of Nazis), but something didn’t quite work – wait for it to come to you, through NetFlix, Love Film or Sky Movies.
Sunny rating: 2/5 popcorns

“Cuban Fury” – This was a really good British comedy, and that’s what you expect from a British film. It’s got that nice irony, it does not take itself too seriously, and it has got enough sentiment to it. Nick Frost holds his own (without his usual film partner, Simon Pegg) and is really good. It was an enjoyable watch.
Sunny rating 4/5 raindrops

“The Lego Movie” – Both my niece and nephew loved it. They didn’t get all the references – which my sister and I both got. It was very fast paced and the jokes came – bang, bang, bang. I did enjoy it and the kids were happy when they came out. If you are into Lego, you will enjoy it, the figures really come to life and the voices (Will Ferrell, Morgan Freeman and Jonah Hill) speak for themselves.
Sunny rating: 5/5 out of  child smiles

“300: Rise of an Empire” – This is the sequel and parallel to “300” but forget that and go and see this with an open mind. We can talk about it next month…

“Muppets Most Wanted” – I am a fan of the original movies and in this it’s a case of mistaken identity with Kermit. There’s a little mole on his face and people don’t recognise him. It looks really funny.

“Captain America: The Winter Soldier” – I am a big fan of comic books and superheroes. It’s a lone outing for this character, and this is phase two of putting the Marvel comic book characters out there, and it’s the lead up to “Avengers 2”. Each of the characters are getting their own movie – the only one rumoured not to be is The Hulk. It’s definitely worth watching, if you don’t know the story, please see it and we will talk…I am excited about this as a comic book fan.

“Grand Budapest Hotel” – This is for quirky people who like the odd film. From what I have seen of the trailers, it is a beautiful, stunning-looking film, directed by Wes Anderson. Forget about realism and just go and enjoy cinema at its best!

“Gulaab Gang” – It’s about these women who don’t put up with any messing about. Screen legend Madhuri Dixit is the leader and Juhi Chawla is the other star. They have never shared a screen before and these are two massive actresses from back in the day and it’s the first time they are together. Chawla is an amazing producer and filmmaker. We need to talk about this next month.

“Queen” (pictured above right)– This is also worth watching. It’s got an independent type vibe (even though it’s a Bollywood movie). It’s about the freedom and self-discovery of this woman who has just got jilted on her wedding day. Go check out the trailers.

There are other Bollywood films out but the above two are the only ones which will enjoy a wide release, so until next month, goodbye and happy film watching!

You can listen to Sunny & Shay on BBC London 94.9FM here www.bbc.co.uk/sunnyandshay

Sunny and Shay from the Bafta nominated Channel 4′s “The Family” delighted us as members of the Grewals whose antics were followed daily on the Channel 4 series – their Punjabi wedding became a major part of the series and gave its non Asian viewers an insight into the build up to a British Asian wedding! Since the success of the show Sunny and Shay now present their own Sunday evening show for BBC London 94.9FM at 6pm.