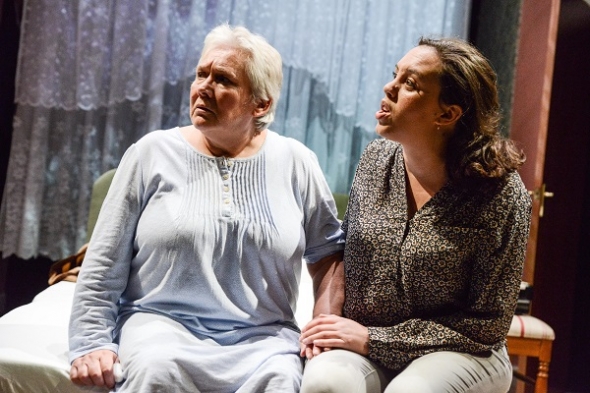 WRITER Nessah Muthy has been wowing audiences with her new play, ‘Sundowning’ produced by Kali Theatre Company and it is on at the Curve Theatre Slough today (November 9) for a final performance*.

The show has also been nominated for two Offies – Off West End awards.

It’s not an easy play to watch and is very harrowing at times, but dementia is something we are all going to have to face up in our lives – directly or indirectly.

The play was inspired by her Nan who was diagnosed with dementia eleven years ago and is now in a care home. It was part of the Kali showcase last year.

“I wanted to explore the idea of ‘care’”, she told www.asianculturevulture.com. “How much of yourself you should give up for others in terms of your identity when you become a carer.”

“It was a personal family question for me as my mum was expected to do this for her mum.

“I wanted to interrogate what value that life has and to purge that pain, I was feeling about what was happening to my grandmother because it is still unbelievably painful.”

As Muthy talks to www.asianculturevulture.com she gets very emotional, because she was brought up by her grandmother and she does feel “an eternal guilt that I was never able to save Nan from the depths of this vile and cruel illness.”

‘Sundowning’ is the story of three women, ‘Betty’ (played by Hazel Maycock, up for the Best Actress award), who is suffering from dementia, her daughter, ‘Theresa’ (Nadia Nadif) who puts her in a care home and granddaughter, ‘Alyssa’ (Aasiya Shah), who wants to get her out of the home and take her on one last trip to the sea-side.

As the two women disagree on how to care for Betty, we learn a lot about their life together, how Alyssa ended up in prison, why Theresa is suspicious of her, but at the same time we also see the effects that dementia can have on a person.

Betty goes back into her past and wants to be with her husband, ‘Jimmy’, there is a lot of repetitive language, and she becomes very tactile and crude.

The title, ‘Sundowning’ comes from a medical term said Muthy.

“It’s an actual medical technical term that means — this is really paraphrasing – that as the sun goes down dementia sufferers experience worsening characteristics of confusion and agitation. It’s a really weird metaphysical reaction to light but it could also be about life!”

Muthy, who is of British Mauritian heritage, was brought up by both of her maternal grandparents and raised in London.

She studied Theatre at the Central School of Speech and Drama and then undertook a Masters in playwrighting at Birmingham University.

She said she had a staunchly working class upbringing, and “all I can write is working class women. My theatrical drama education was Eastenders’ and I was taken to panto.”

She owes her love for writing through a “fantastic drama teacher who pushed me towards arts at Beacon School, Banstead (Surrey)” – a standard comprehensive.

Her writing voice is distinct and she is the inaugural recipient of the Verity Bargate Character 7 Award – Character 7 is a TV production company who give you money to option and develop an idea for television production.

She has written for television before and worked for Sky TV’s first Asian reality show, ‘Desi Rascals’ but this award will help her to develop a fiction idea.

‘Sundowning’ is a play she has been developed over several years – and without the support of Helena Bell, artistic director of Kali Theatre, this show might have not reached our stage.

The company provides opportunities in theatre writing for women of South Asian heritage, and if we want to change the landscape of the arts, you need Kali at the heart of it, argued Muthy.

*Though a performance is indicated for November 10, it is shown as sold out.