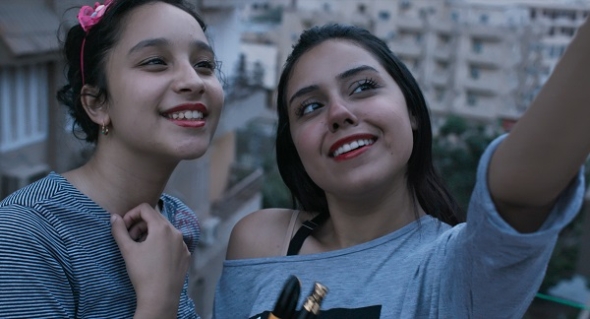 RIGHT now, much of the world is focused on the plight of girls and women in Afghanistan and this film, ‘Souad’ has much to say about girls and young women growing up in a Muslim majority country.

In fact, it goes far beyond this – and is a powerful parable about the way social media affects young people and their self-image, especially as their personalities are still developing.

Souad, the name of the central protagonist, is a 19 year old who is studying and still lives at home with her family in a small town in Egypt on the Nile Delta.

She has a decent circle of female friends who occupy different points on a line (if it can be seen like this) from conservative to liberal – and is no different to many other societities, where people have some degree of choice over their personal morals and relationships.

Some of her friends are keen to have romantic and physical relationships – some before marriage – of course in many conservative societies, this is essentially taboo – though there may be some latitude for youthful, romantic, mostly chaste exchanges.

The first time we see Souad herself – played beautifully by Bassant Ahmed – she is gleefully chatting to a veiled older woman on a bus.

She describes her life – she is studying to be a doctor, carrying on a long family tradition and is betrothed to another doctor and gets on well with her prospective in-laws. The older veiled woman is suitably impressed.

This is far from the truth – in the reality most of us would understand.

Director Ayten Amin, in only her second feature, introduces us quickly and effortlessly to this other world which Souad inhabits. Amin co-wrote the script with Mahmood Ezzat.

Souad lives at home with her younger sister Rabab (Basmala Elghaiesh) – and her father is not a doctor; he appears at home in a tracksuit and has some unspecified work. The family are hardly living the life of luxury in a modest apartment, but it isn’t an unhappy household by any means.

The doctor fiancée Ahmed (Hussein Ghanem) is not what he seems either – and he and Souad began an online friendship.

They flirt and talk online and both show interest in the other.

It is a relationship of sorts certainly – Souad at times inflates this or is more honest about it with her friends – it really depends on how she feels and the company she keeps.

She is both enraptured and enthralled by Ahmed at times and its online possibilities – again Amin’s skill is to couch all this on youthful romantic exuberance and neither party appears to be doing the other any great harm at least on the surface – though at another level both are playing at emotions, some genuine, others somewhat conjured up to seduce, entertain or even possibly just titillate – and both seem to be equal in this enterprise.

Something happens and the world we are just beginning to make sense of falls apart. The characters lives’ change irreparably and the focus of the film switches to Rabab who searches out Ahmed.

Rabab is a few years younger than Souad but is fascinated with the ‘relationship’ her sister has built with Ahmed.

Their meeting and subsequent exchange on a long afternoon are uneasy, uncomfortable and awkward. It makes for difficult viewing too – just why is a man in his mid to late 20s meeting with a schoolgirl teenager?

We encounter Ahmed’s older media and writer friends and he confesses he has a girlfriend – then ‘what was Souad to you?’, Rabab asks pointedly.

‘Souad’ was originally selected to screen at the Cannes Film Festival in 2020 but after its cancellation, it enjoyed a premiere at the Berlinale earlier this year and continued to impress the festival circuit.

At the Tribeca Festival in New York this June, Ahmed and Elgahiesh were jointly awarded Best Actress in the International Narrative competition section.

This is a compelling film beautifully cast and acted with both professionals and non-professionals.

Set mostly away from Cairo and in Zagazig, a city on the Nile Delta and partially in suburban Alexandria, this is a film that gives a beautiful insight into a world we know very little about really – at ground level, especially where young girls in the Arab world are not so different to their counterparts here or in parts of South Asia, where mobile phones are ubiquitous. The pressures are identical and perhaps only more complicated because of the powerful cultural mores that often govern social relations between the sexes.

Intelligent, humane and non-judgemental, ‘Souad’ shows the pressures young women face not just in societies, such as Egypt, but asks questions more generally and powerfully about selfhood, independence and freedom in a world where the digital existence is increasingly dominant and asks, who is changing and how much is real?
Acv rating: **** (out of five)

Listings information
‘Souad’ is being distributed by the BFI and will be in selected cinemas from Friday, August 27

On Friday (August 27) ‘Souad’ will be presented as the centrepiece to the The Time is New: Selections from Contemporary Arab Cinema strand which runs until October 5 at the BFI Southbank

Privacy & Cookies: This site uses cookies. By continuing to use this website, you agree to their use.
To find out more, including how to control cookies, see here: Cookie Policy
← ACV Bird Eye Review Show Episode 11 (March) Girl Power edition – ‘The Girl on the train’; Bombay Begums and Leeches (Bandra Film Festival 2021)
BFI Flare 2021 – What to look out for at online LGBTIQ+ festival… →