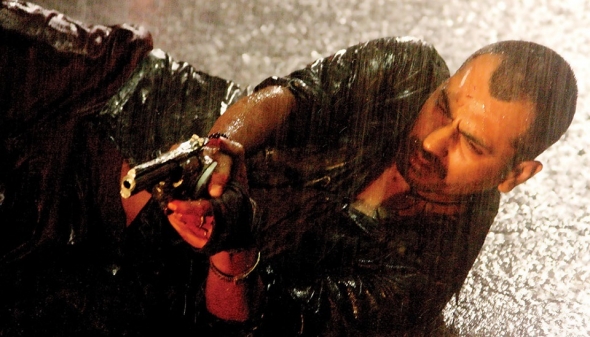 Out go your masala movies with their pop and corn, tamasha and titillation, and in come these rather more challenging numbers in Hindi and other Indian languages.

Ok, so your regular (even UK Asian) multiplex theatre is not about to screen ‘Monsoon Shootout’, Amit Kumar’s film, which opened the week-long super cast of movies at this year’s fest, held last month (July).

It’s a sign of change, perhaps even amounting to an ‘Indian new wave’ that still has some shores to hit. (See http://www.asianculturevulture.com/portfolios/making-waves-in-india/)

As festival openings went, it was pretty swell – we had the director and several leading lights from the British film industry and it all helped to lend a certain glamour and pizzazz to proceedings.

About a rookie cop in Mumbai, ‘Monsoon Shootout’ takes us on a journey through the detective’s conscience without any sense of a soft focus.

Ten years in the making – it was a moment to savour in London, perhaps not as sweet as the one in Cannes, when the film premiered at a festival midnight screening (accompanied by an appropriate deluge) and was rapturously received – but nevertheless it represented a rich journey for Kumar, who quit a corporate career for one making films.

Monsoon Shootout’s brave, gritty and uncompromising and would never be made by a big Indian studio, looking to make a Crore or two (Rs10 million/£100,000)

For a start, there’s no happy ending.

Kumar said as much in lively Q&A hosted by BBC London 94.9 presenters Sunny (looking most dapper) and Shay (as always, elegant and polished).

“While we were scripting in the development stage, there were a lot of suggestions to make a happy ending. For the sake of happy ending, then I might as well not have made the film,” Kumar explained.

From an Indian director that is refreshing and courageous – too often the money men (and it is) will change elements to suit their pre-conceived ideas of the film’s audience and not care about its aesthetic impact.

Kumar was dangled money to make the movie if he was prepared to cast a star in the lead role, but he stuck to his principles and has let the film and the very fine acting do its own talking.

Cop Adi played by Vijay Verma and Shiva the gangster, reprised by the ever reliable Nawazuddin Siddiqui, show their mettle.

“I made the film I wanted to make,” Kumar revealed. “I was standing on my principles – we would not have made the movie otherwise.”

The film is perhaps a tad repetitive, but that is no surprise because it plays out three different scenarios of one very pivotal incident.

Kumar handles the film well and there is much to admire and enjoy, but emotionally a couple of very powerful story lines lose their impact because they are relegated to an idea – the idea, really.

That concept holds the film together, so it is difficult to be critical – change it and you have more of a traditional and conventional movie that may not be as stimulating –  though, perhaps, it may hit you in other ways. But who knows?

Kumar himself made a pretty good case for the film he did make and we should welcome a director who wants to say something meaningful and thoughtful and has the requisite skill to do so.

“The root of the film is about a guy trying to make up his mind and the workings of his conscience and he is trying to say, if I do this, how will impact on someone else?

“It was very important for me to say here is a character who is sensitive enough to think about another person and his decisions are based on that.”

Kumar said that Adi understands himself and his choices far better as the different scenarios become apparent.

“He is looking to make lives better – discovering the strength in him to take those decisions, but primarily coming from the idea of thinking about the other guys first.”

Those in authority, take note please, Kumar is saying.

The director was joined on the panel by award-winning British director Asif Kapadia, who befriended the Indian filmmaker many years ago as when he was making his first and scintillating feature, ‘The Warrior’, which won two BAFTAs in 2003.

Kapadia is one of the executive producers of ‘Monsoon Shootout’ and another significant source of assistance was Trevor Ingman, who managed to secure European partners, after the government shut down the UK Film Council, which was prepared to put money in under its usual terms.

The end of the panel discussions took on a surreal character as Kumar pretended to ask himself a question and then Kapadia chipped in with a question to both (the real and surreal) Kumar, asking in effect, was there anything that could have changed the ending…Kumar, coolly riposted: “What do you think?”

The festival ended with ‘Bombay Talkies’, a film that is made up of 30 minute pieces by four different directors, Karan Johar, Dibaker Banerjee, Zoya Akhtar, and Anurag Kashyap.

It was conceived as a celebration of a 100 years of Indian cinema and produced by Ashi Dua, who attended the closing gala and looked almost impossibly glamorous and young, to be cajoling four well-established directors into making short films for such a celebration.

Does it work? To a degree and because of the contrasts in style and subject matter. As celebrated critic David Thomson argues films are essentially about our dreams and each director comes to that with their particular take.

Johar, a big Bollywood hitter, presents a drama about homosexuality and features two men kissing. It’s glitzy, glossy and slick, but a little melodramatic and very in your face, if you’ll excuse the expression.

Banerjee’s is a far gentler tale altogether – developed from a Satyajit Ray short story it stars the ever versatile Siddiqui, one of the undoubted talents of Indian indie cinema. He carries the fable – about an ordinary Mumbaiker being asked to step into a big Bollywood production.  Charming, subtle (even with an Emu), it should leave you with a smile.

Akhtar’s packs a punch in favour of diversity and pursuing your dream. The child actors are superb and the relationship between a young boy, who loves dancing and his smart young sister, throw into relief many of the expectations Indian families have of their offspring. It’s well plotted and neat, if a little sugary.

Kashyap, very much Indian indie cinema’s poster director, presents a funny, poignant meditation on the nature of fan worship with Amitabh Bachchan, the ‘Big B’, the focus of one man’s indefatigable attention. Desperate to meet the star to fulfil a family vow, it encapsulates a fan’s every emotion – from deep disappointment to lasting satisfaction and states, perhaps, life isn’t like a movie.

In many ways, it was a fitting closing finale to a film festival that showed there are films coming out of India which are about more than just entertainment and forgetting life as it is.

The sheer range of films on offer, and the opportunities the festival affords fans and directors to meet is a great asset of the LIFF.

We hope that the 5th anniversary instalment next year will represent another chapter in the unfolding story that is Indian ‘new wave’ and let’s hope directors in India understand what a premiere in the UK can do for them – see what happened to ‘Lucia’ when it took the best film audience prize at this year’s fest.

Privacy & Cookies: This site uses cookies. By continuing to use this website, you agree to their use.
To find out more, including how to control cookies, see here: Cookie Policy
← ‘Into Dust’ – Oscar winning documentary director Orlando von Einsiedel’s first narrative drama packs a punch and commemorates Pakistani Perween Rahman’s work…
‘Moth’ – debut novelist Melody Razak’s stunning work is a powerful addition to Partition memory… →