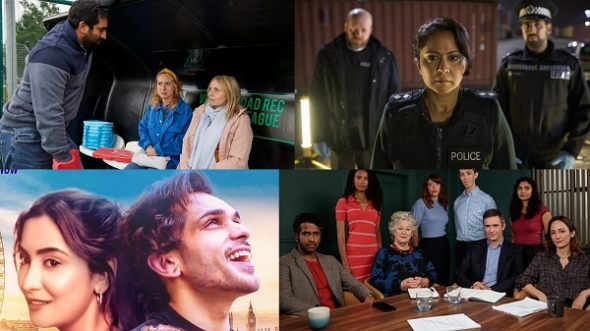 STAR of ‘Bend It Like Beckham’, Parminder Nagra, is set to return to both our small and big screens very soon.
Firstly, you will see her as the lead character in a new detective, police procedural drama – ‘DI Ray’ which starts on ITV on next Monday (May 2). (See listing below).
Written by ‘Line of Duty’ (‘LOD’) actor Maya Sondhi and helmed by that series creator and lead writer, Jed Mercurio, this drama sees long-serving Di Rachita Ray get a promotion and head up a team investigating what looks like a ‘honour’ crime.
www.asianculturevulture.com has seen the first episode and it’s an edgy, intriguing and complex drama that looks like it will keep people guessing.
Sondhi joked that because Mercurio killed off her character in ‘LOD’, she had to make up her own.
There’s a strong cast of British Asian actors as two Asian families are at the centre of a murder at the beginning and Nagra’s Detective Inspector Rachita Ray is a compelling character herself – a brilliant police officer, who has a lot of self-doubt – not so much about her ability to do the job but about who she is, in terms of her identity and not quite fitting in.
In an ITV press conference, Sondhi said she was keen to create someone on the telly she and others who hardly ever saw themselves on TV when growing up could relate to. (More tomorrow).
Nagra is also set to star in LGBTQ+, YA (Young Adult) film ‘The Kiss List’, alongside American actor Megan Suri. The film is an adaptation of author Sara Jo Cluff’s book of the same name, and has just finished filming in Louisville. It’s about a girl whose ex-boyfriend tells everyone she is a bad kisser and she decides to wreak revenge by kissing all the good-looking boys at her high school but it doesn’t quite go to plan. There is no current release date information for ‘The Kiss List’.
More on ‘DI Ray’ tomorrow – ‘DI Ray’ goes out first on Monday, May 2 at 9pm on ITV and runs on four consecutive nights until Thursday, May 6. See ITV hub after Monday.

ACTORS Prasanna Puwanarajah and Hiftu Quasem can be seen in ‘Ten Percent’, a remake of French comedy series ‘Call My Agent’ which dropped today (April 28) on Amazon Prime.
The British version takes the same premise as the French series – the founder of a talent agency (played by Jim Broadbent) unexpectedly dies – leaving its staff fending for themselves and the company falling to pieces. Jack Davenport, Lydia Leonard and Maggie Steed star, along with famous cameos from Himesh Patel, Helena Bonham Carter, Olivia Williams and Dominic West.
Puwanarajah will also features in the forthcoming series of ‘The Crown’ as journalist Martin Bashir, who famously conducted the now discredited Princess Diana interview where she talked candidly about her marriage breakdown. Quasem has appeared in series 3 of BBC smash hit, ‘Killing Eve’ and is a Bafta Scotland new talent recipient.

ANOTHER actor hitting the mark is Yanick Ghanty who is making his TV breakthrough role in a new sitcom called ‘Hullraisers’ which is currently showing on Channel 4.
This comedy based in Hull is centred around Toni (Leah Brotherhead), a mum who still harbours ambitions to be a star. Her closest pals are sister Paula (Sinead Matthews) and her best friend Rana (Taj Atwal). Ghanty (pictured right) plays Dane and is family both ways – he is married to Paula and is Rana’s big brother. He and Paula have two children, 17-year-old Ashley (Natalie Davies) and seven-year-old Jake (Jaylan Batten).
Adapted from an Israeli sitcom by actor-writer and Hull native Lucy Beaumont, it’s quirky, funny and worth your time if you like your humour a little on the risqué side.
Ghanty, who grew up in South London and has Mauritian and Indian heritage is a product of East 15 Acting School, part of the University of Essex, told www.asianculturevulture.com: “I’ve had small parts in short films and features, but this is a big breakthrough role as a character actor in a TV series.”
Learning a Hull accent was the toughest part of the role – he mouthed strange phrases at night much to the consternation of fiancée and fellow actor Nisha Aaliya. He’s certainly warmed to Dane – and his mother in ‘Hullraisers’ is one-time Corrie fave, Shobna Gulati.
“Dane’s a real Mummy’s boy, he walks around the house like a big man, but he’s a cuddly, cute bear. He’s got a lot of Dad jokes too.”
Ghanty is a multi-faceted actor who sings and has appeared in musical theatre as well, most notably in ‘Bring on the Bollywood‘. He first started out in action roles, is serious about fitness and much admires Hollywood crossover star Jackie Chan.
‘Hullraisers’ is available to watch on All4 and is broadcast on Channel 4 on Tuesdays at 9.35pm (check weekly times) contiunes on May 3 (episode 4/6) and till May 17. (Sailesh Ram)

INDIAN TV STAR Shristi Jain is thrilled with the reaction to her London-based music video with actor Samer Singh Dawar.
The two were paired up together for the first time in ‘Tujhe Dhunde Meri Jaan’ (‘Find you my darling‘).
She told acv: “It was great being a part of it because the song is really lovely, plus there were a lot of young minds on the project who were working on the story and on how each shot should be taken.”
Glossy, and film-feature like with vocals by Asit Tripathy, the story sees Dewar initially woo Jain in and around some of the best-known sights of the capital. They also indulge in eating a rather large hot dog together – but their love affair takes a turn…
Model and Instagram star Dawar was appearing in his first music video. He told acv: “When I heard the song, the lyrics were so engaging and had a depth to them. In the spur of the moment, I thought this should be the song in which I can proudly say I debuted with.”
Jain is best known for her role in Star Plus’ ‘Meri Durga’ and has a verified Instagram account with a 195K followers, while Dawar has nearly 15,000.
You can see the music video https://www.youtube.com/watch?v=11KRbZ2v57Y

Privacy & Cookies: This site uses cookies. By continuing to use this website, you agree to their use.
To find out more, including how to control cookies, see here: Cookie Policy
← ‘Diversity Not Fascism’ – Artist Manou Marzban’s German war helmet series shows in the UK for the first time…
‘Annie’ – Meera Syal revels in ‘baddie’ role and says dancing did not come naturally… →