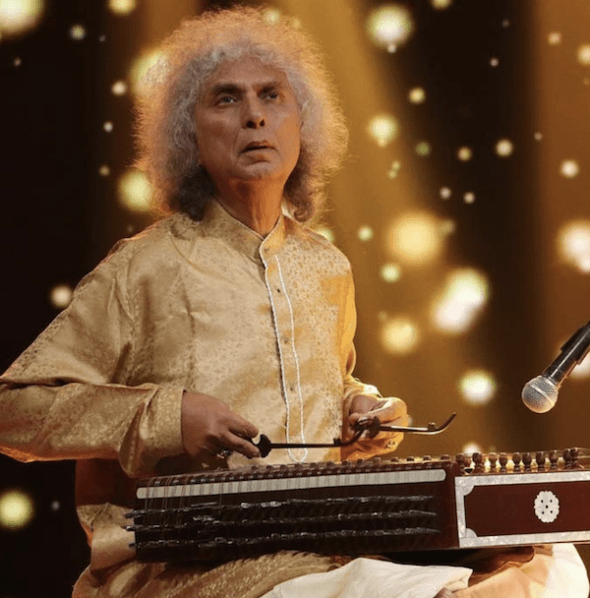 TRIBUTES have been paid from far and wide after it was announced that Pandit Shivkumar Sharma, one of India’s foremost classical musicians had passed away earlier this morning (May 10).

Aged 84, the santoor player suffered a heart attack after being on dialysis for six months. He had not been incapacitated significantly and was still performing at concerts.

“He had a severe heart attack at around 9am (4.30am BST). He was active and was to perform in Bhopal next week. He was on regular dialysis but was still active.”

Sharma started playing the santoor at 13 years old and was trained in vocal and percussion music. He was taught by none other than his father, Pandit Umadutt Sharma, who was a famous musician and always wanted his son to popularise the santoor.

Pandit Sharma was born in Jammu, in northern India, in 1938. He was the first musician to have played classical music with a santoor and became a pioneer of the instrument. It had been, until then, mostly a folk instrument and somewhat a poorer relation to the sarod or sitar.

Pandit Sharma was awarded several awards during his lifetime, including an honorary citizenship of the city of Baltimore, USA, in 1985, the Sangeet Natak Akademi Award in 1986, the Padma Shri in 1991 and the Padma Vibhushan in 2001.

India’s Prime Minister Narendra Modi tweeted how his music impacted the world.
“Our cultural world is poorer with the demise of Pandit Shivkumar Sharma Ji.”

“He popularised the santoor at a global level. His music will continue to enthral the coming generations. I fondly remember my interactions with him. Condolences to his family and admirers. Om Shanti.”

“Amazing musician and composer…a man that always was kind and forever smiling…the beautiful sounds of his #Santoor will forever be present in our hearts…condolences to Rahul and all the family. #ShivkumarSharma.”

Pandit Sharma has two sons, Rahul and Rohit, the former is a santoor player like his father, while Rohit is a film executive.

Sarod player Amjad Ali Khan tweeted: “The passing away of Pandit Shiv Kumar Sharmaji marks the end of an era.

“He was the pioneer of Santoor and his contribution is unparalleled. For me, it’s a personal loss and I will miss him no end. May his soul rest in peace. His music lives on forever! Om Shanti.”
Several leading Indian politicians also paid tribute to the santoor player.

Pandit Sharma is surivived by his wife Manorama Sharma and two sons.

Pandit is an honorific term bestowed on musicians who have achieved a certain standing.

*Jay Visvadeva, director of UK-based Sama Arts, will be writing a tribute piece about his dear friend, Pandit Shivkumar Sharma, whom he befriended in September 1970 – look out for it soon by following anyone of these social media channels – Twitter/Instagram/Facebook/

Privacy & Cookies: This site uses cookies. By continuing to use this website, you agree to their use.
To find out more, including how to control cookies, see here: Cookie Policy
← Arti Prashar is delighted that her OBE shines light on theatre and artistic work done “quietly in hidden spaces”
Actor Nitin Ganatra, Theatre director Pravesh Kumar and founders of Bradford Literature Festival all given New Year’s Honours… →