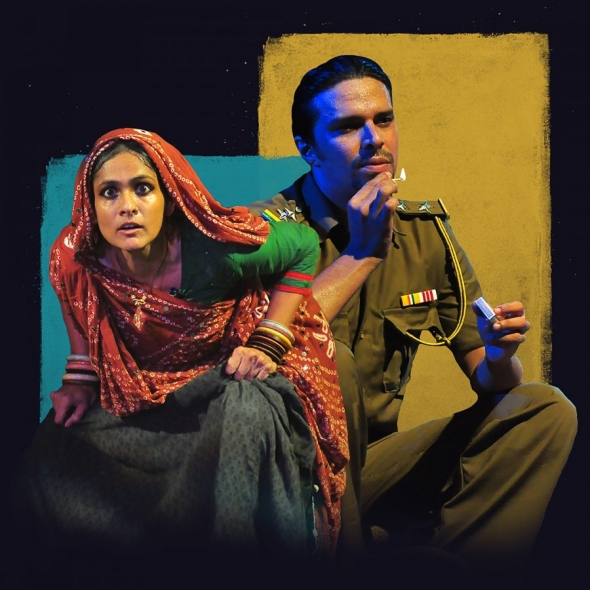 After a string of successful performances in India, ‘Night’s End’ comes to British audiences for the first time, giving us all a taste of Indian forest life…

IT IS A PLAY that explores the theme of animal conservation and questions our social responsibility to the environment that surrounds us.

On a short run at the Soho Theatre in London until Saturday (December 2), the highly acclaimed ‘Night’s End’ is performed by the Chennai based theatre group, JustUs Repertory.

It is in London, as part of the final segment of the UK-India Year of Culture events.

From Delhi to Los Angeles, the play has travelled far and wide and is now premiering to a London audience.

Set in a reserve forest in Rajasthan, ‘Night’s End’ follows the story of forest guard, Krishnan Nair (Sheejith Krishna); a man who grew up in a family of classic Kathakali artists in rural Kerala and uses that art to express his love for the forest and all things living in it.

He works hard to protect the animals from foreign poachers and finds himself nursing a tiger cub to adulthood after her mother was killed.

Writer and journalist Gowri Ramnarayan talked to www.asianculturevulture.com about the themes behind her play and what inspired her to write it. She was one of the founding members of JustUs Repertory, which encompasses dance and music more than just traditional drama.

It’s Nair’s relationship with the tigers that form the central crux of the drama and his quirky personality that allows a different way of looking at Man and Animal.

“The idea came from a chance meeting with a nomad at a wayside tea place on the highway during a road trip through Rajasthan.

“Progress had displaced him and his ancient tribe from their land, language and culture. Why did I give centre stage to the tiger? “William Blake’s vision of the tiger’s fearful symmetry and Jorge Luis Borges’s idea of the ‘Other Tiger’ made me believe that the tiger is not only flesh and blood, but also represents the power of imagination, which enables humankind to survive.”

The story also features the vivacious, headstrong woman, Chandni (Akhila Ramnarayan) who is drawn to Krishnan’s dancing and admiration of the forest they both live in.

Ramnarayan explained: “Chandni belongs to the nomadic Mogiya tribe, once great hunters, now forcibly resettled by the state and caught in a complex nexus of politics, corruption, and crime.

“She is the voice of that beleaguered community, both in its heyday when the Mogiya people roamed free, and now, when they are beset by poverty and hardship.”

It’s easy to see the parallels between the tribal people whose lives have been disrupted as a result of Western corruption and greed and the forest animals, which are killed and displaced by foreign poachers.

‘Night’s End’ is a detailed story of abandonment and loss in which the actions of humans — indigenous peoples, settlers, tourists, the state, the media — powerfully affect the fragile eco-system we inhabit.

And what can audiences take away from ‘Night’s End’?

“They can expect total performance by a committed team who are passionate about theatre and this play in particular.

“They can expect to be riveted, moved, inspired. If that happens, that will be our fulfillment. The prospect of connecting with a new audience is so exciting!” said Ramnarayan in an email exchange.

On the play itself as seen at the Soho Theatre, she tackles subjects that go right to the heart of the debate about development Vs conservation, and the conflicts that exist within communities and sometimes even within individuals themselves.

She does so in a way that is both original and engaging and is aided by extremely strong performances, but perhaps she took on too much for the play to hit home with a single clear message.

Nevertheless, it is great to get an insight into a world we rarely think about or apppreciate, living in big city.

Privacy & Cookies: This site uses cookies. By continuing to use this website, you agree to their use.
To find out more, including how to control cookies, see here: Cookie Policy
← Bollywood asianculturevulture vibes – Glasgow to Mumbai and back as more blockbusters come into view…
‘Tenet’ – Well worth the ride, but stick to the Christopher Nolan world you find yourself in… →