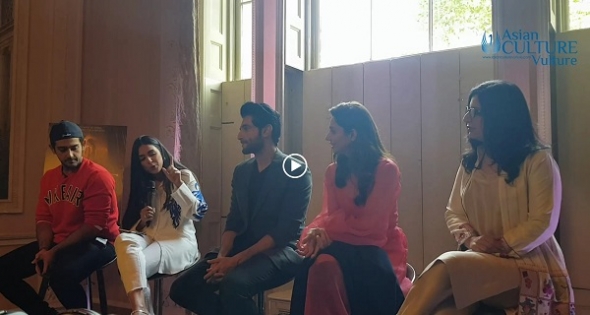 Another film, ‘Superstar’, rolled into London on the publicity trail…

A L’Oréal ambassador, who made her Cannes Film Festival debut on the Red Carpet last year, was in London to promote her film, ‘Superstar’, with co-lead Bilal Ashraf.

She also featured in Shah Rukh Khan’s ‘Raees’ (2017), some time before the ban on Pakistani and Indian artists working on each other’s films.

‘Superstar’ has met with a largely positive response and many are praising her and her co-star Bilal Ashraf for their performances.

Both cut dashing and glamorous figures at Home House, when they were quizzed by London-based journalists last week.

There was chemistry and it probably played out well in the cinema too.

It felt like a moment for the Pakistani film industry too over here and in the West in general.

Soon after the promotions for another film, ‘Parey Love Hut’, here was another glam set of film talent and turning heads in London, Birmingham and Manchester.

Khan actually has a small role in that film too – in an item (dance) number, though being a family film, it’s quite modest.

‘Superstar’ is in cinemas now worldwide

Privacy & Cookies: This site uses cookies. By continuing to use this website, you agree to their use.
To find out more, including how to control cookies, see here: Cookie Policy
← Tara Arts up for two awards in annual Stage Awards 2017 and star calls for colour-blind casting…
‘Viceroy’s House’ – First look, poster, trailer and release date of Gurinder Chadha film →