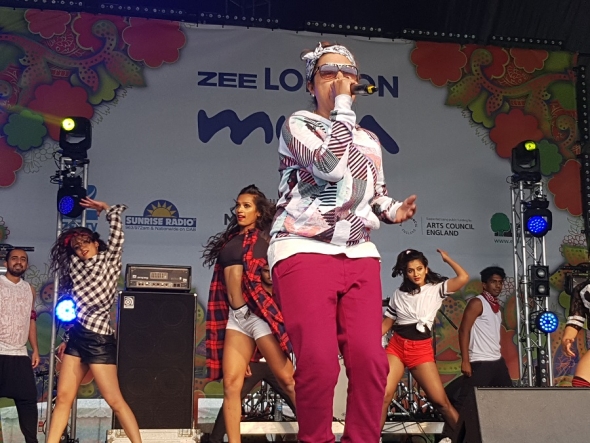 PERHAPS the weather could have been kinder but the spirits were no less roused by the acts on stage or the general vibe.

The London Mela on Sunday (September 3) continues to be a rather special and probably unique event in the capital’s cultural calendar.

What other event could bring together such diverse talents as Talvin Singh and Hard Kaur to name just two?

London Mayor Sadiq Khan dropped by (in contrast to Boris Johnson, the previous mayor who supported the fest but never appeared), and felt the love and passed it on – his speech reiterated his opening pledge that London is Open, remains so, and always will be.

He said the Melas on the subcontinent were ‘ok’ but Britain and London added a special ingredient to them – rain. He said this addressing VIP guests at a reception before he hit the main stage.

He confessed that at one stage around 18 months ago the Mela was in peril and that without the Mayor’s support it may well have vanished. Last year, Wembley Park hosted an even rainier London Mela (see last year’s video).

Ajay Chhabra, London Mela, addresses dignitaries at a special reception with Julian Rudd, London Mela producer alongside… see what Chhabra said in our Twitter video below

Chhabra said above all it was ‘a coming together’ – which is what Mela means essentially – and that he would continue to reach out to different communities and groups to make the event as inclusive and diverse as possible, while allowing audiences to enjoy some of the best artistic talent around today.

Dinesh K. Patnaik, India’s deputy high commissioner, echoed the spirit of friendship and shared cultures. He stressed the ‘South Asian’ aspect of the festival and said that the coming together of communities at the Mela was something he welcomed and said he looked forward to many more.

Neeraj Dhingra, CEO of headline sponsors Zee, said the festival’s remit fitted their own and was the idea ‘the world is one family’- Vasudhaiva Kutumbakam (an ancient Sanskrit/Hindu phrase) in action.

Anyone who was at Talvin Singh in the Anokha tent (celebrating 20 years of the Asian music underground scene) is richer for the experience and the energy and music on the main stage was no less uplifting – just differently so.

Rapper Hard Kaur, Punjabi vocalist Miss Pooja and DJ Rekha brought their wonderful talents to an excited and diverse audience. There were other performers of course including Asian Dub Foundation on later, but the former three formed the core of the late afternoon’s performers.

Not to be outdone DJ Donnie Brasco as the main stage musical host kept it all tight and light – while Asad Shan (from Zee, the main sponsors) and Sonia Datta from Sunrise Radio revelled in the collective excitement.

It might have rained a bit but anyone who enjoys the diversity of South Asian cultures and its myriad artistic expressive forms cannot help but be elevated.

As everyone who spoke at the reception stated – in these difficult and testing times, we must cherish these events that bring people together, break down barriers of all forms, and revel in the creativity of the human spirit.