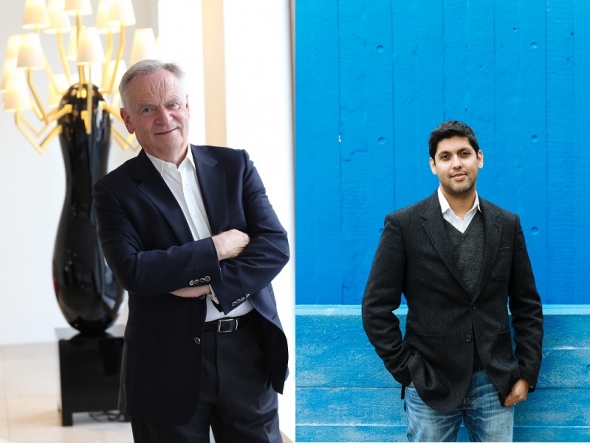 IT IS PERHAPS one of more unusual pairings in Asia House Bagri Foundation’s ongoing Literature Festival but it promises to be a night of mystery, mirth and bookish magic.
One of the country’s most successful crime writers of recent times – a Scottish-raised novelist of Indian heritage joins a one-time peer of the realm and someone who had to fall on his sword (figuratively) and slid out of the limelight for a time, but continued to write and his books have been consumed in millions.
What brings them together and what they share is a fascination and love of India and both have devoted readers there.
Asia House, the business and cultural institute which encourages relations and better understanding between East and West, has brought together Abir Mukherjee and Jeffrey Archer for a talk titled, ‘Writing to Thrill’ – tomorrow (November 1).
Archer has a new book out – ‘Heads You Win’ – which will be officially released on the same day. It starts during the height of the Cold War and charts the rather implacable nature of both the KGB and the Soviet Union; and how one character creates a new life for himself in the US and then runs into some issues with the Russia of today. Critics have already likened it to some of Archer’s most famous novels, ‘Kane & Abel’ (1979) and ‘First Among Equals’ (1984).
Mukherjee grew up in Scotland and his first much praised novel, ‘A Rising Man’ came after he won a Daily Telegraph crime writing competition. His debut and big breakthrough novel created the iconic, Captain Sam Wyndham and ‘Surrender-not-Banerjee’ who are crime sleuths in pre-Independence Kolkata. His last work published this summer, ‘Smoke and Ashes’ takes us back to 1921 and Wyndham can only get past the trauma he has witnessed during the Great War with opium – but any whiff of this and his superiors will drop him without haste, so he has to rely on his trusted lieutenant Banerjee to cover for him when things get tricky.
The talk will be moderated by Erica Wagner, author, editor and cultural commentator.
Busy men and much in demand globally, we managed to fire a few questions at them ahead of their talk.

www.asianculturevulture.com (ACV): What drew you to write about 1920s Kolkata (Calcutta)?

Abir Mukherjee (AM): I find the period of British rule in India a particularly fascinating place and time, unique in many respects and one that’s been overlooked, especially in terms of crime fiction. I think that period in history has contributed so much to modern India and Britain, and it was a time that saw the best and the worst of both peoples. And yet, it’s not a period that is taught in British schools.
I made a conscious decision to set the series in Calcutta, not just because it was the place my parents came from, but it’s a fascinating city, unique in many respects and in the period that the series is set, it was the premier city in Asia, as glamorous and exotic a location as anywhere in the world. But it was a city undergoing immense change and it was the centre of the freedom movement, a hotbed of agitation against British rule. The history of Calcutta is the history of the British in India. Their presence still cries out from its streets, its buildings and in its outlook.
It would have been harder for me to write authentically while setting it in another Indian city.
My parents are from the city, and I grew up speaking Bengali and visiting Calcutta since childhood. While I also know Bombay and Delhi quite well, I don’t think either city had the same hothouse atmosphere that Calcutta had during the period.

ACV: For many years, there was hardly any crime writing from British Asian authors and what writing was published tended to be more on the overtly literary fiction side, why do you think that is? What about the crime genre in India itself? And what or who inspired you to write in this genre?

AM: I think in this country we have a view that British writers of South Asian origin should be writing what’s historically been termed, literary fiction, and that’s because for decades the only novels written by British Asians which the book industry saw fit to publish were literary novels, mainly about the immigrant experience and angst at living as a minority in British society. The fact is, though, that times have changed. We are now second and third generation British citizens, born and bred here, and while we still face unique challenges, we are, in the main part, a lot more comfortable in our Britishness. As such, many of us don’t feel the need to write about issues of identity and belonging and arranged marriages; we want to write about a much wider variety of subjects. As for crime fiction, this has for a long time been a genre at the forefront of change. Whereas five years ago, you’d be hard pressed to name one writer of South Asian origin, there are now probably a dozen, with new authors being published each year.
Having spoken to a number of crime fiction authors from India, I get the impression that the crime genre there fell out of favour for a long time. Despite having a great history, with writers such as Saradindu Bandhyopadhyay who wrote the Byomkesh Bakshi novels, and Satyajit Ray’s Feluda series, there was a feeling that the genre wasn’t one to deal with serious issues of the day. I think this has changed in recent years with a number of fine crime fiction writers coming out of India such as Ankush Saikia, Monabi Mitra and Kishwar Desai.

ACV: How do the people of Kolkata react to your work?

AM: To be honest, I was quite worried about how the books would be received in India, particularly in Kolkata and wider Bengal, but I’m glad to say, the response has been wonderful. I think the books portray a period in Indian history which traditionally has been represented almost exclusively from a white, British point of view. To see a more balanced, more nuanced perspective, especially from someone born and raised in Britain (though of Indian heritage) comes as a somewhat pleasant surprise.

ACV: What is it about India that keeps you going back?

Jeffrey Archer (JA): I love the country, the cricket and the calm civilised people who just happen to love reading.

ACV: What do you remember of your first visit? How do you feel about the changes since?

JA: When I first visited Mumbai in 1969 it looked like a Third World country, and now, fifty years later, it’s now a world leader in so many fields, with far more opportunities for the young, particularly young women, than ever before.

ACV: You’ve set a segment of ‘Cometh the Hour’ and short stories in India, was that a particular challenge?

JA: This was a challenge because it had to be accurate and credible for the Indian people, and I’d always wanted the chance to write about a country I’ve visited so many times.

ACV: Please tell us a little about ‘Heads You Win’, does it have any India connections at all?

JA: ‘Heads You Win’ doesn’t have any connections to India, but in fact opens in Leningrad, Russia in 1968. Alexander Karpenko’s father has been assassinated by the KGB for defying the state, and he and his mother have to escape from Russia if they hope to survive. At the docks, they are confronted with an irreversible choice, should they board a container ship bound for America or Great Britain? Alexander leaves that choice to the toss of a coin….in a single moment a double twist decides Alexander’s future. During an epic tale of fate and fortune, spanning two continents and thirty years, we follow his triumphs and defeats as he struggles as an immigrant to conquer his new world. As the story unfolds, Alexander comes to realise where his destiny lies and accepts that he must face the past he left behind in Russia.

ACV: You are very popular in India, and you have very healthy sales there, any thoughts on why that is, apart from your trips there and your obvious celebrity?

JA: The Indian people are great readers and love stories about aspirations and achievement. According to the Times of India, ‘Kane and Abel’ has been read by 50 million people.