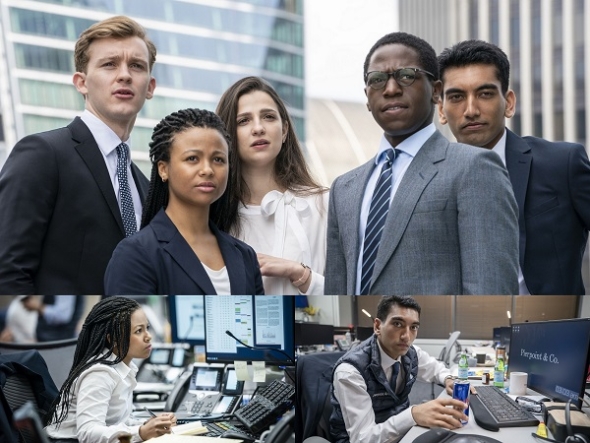 LOOKING for something gripping to do over the winter months, then search no further than the HBO/BBC television drama, ‘Industry’.

It premieres on Monday (tomorrow) on HBO in North America and then Tuesday (November 10) on BBC Two in the UK.

This eight-part series is a TV debut drama by British writers, Konrad Kay and Mickey Down and follows the fortunes of young British and American graduates as they begin working for a fictional US investment bank, Pierpoint & Co in London.

Kay and Down discuss how this show was put together in this interview on You Tube (see link below), they both are university graduates who worked in high finance.

Later, Down worked at producer Jane Tranter company’s Bad Wolf (which co-produces this and she encouraged them to write a show set in the investment banking sector from the perspective of the people on the lowest rung of the ladder).

Over time, these characters enter the competitive and cut throat world of high finance where the motto is “greed is good” (as ‘Gordon Gekko’, told us many years ago in the movie, ‘Wall Street’, 1987 directed by Oliver Stone) and the culture is “up or out”.

The graduates are told at their interviews: “Enrich your clients, enrich us, enrich yourselves. Really look at the guys and girls next to you. Half of you won’t be here in six months.”

It is absorbing to watch – www.asiancultureculture.com caught a few episodes at the London Film Festival (LFF), and we can’t wait to get stuck in now.

It’s a very authentic depiction of a financial milieu which is very competitive and the interview process seems weird and gruelling, as real life graduates can testify.

People are asked questions such as “how many golf balls fit in a Boeing 747?” It is a question posed to see how you think and what assessments you make under pressure and in a very limited timespan – with few facts or information.

The first episode, directed by Lena Dunham sees prospective graduates (from London and from New York) including ‘Harper Stern’, (Myha’la Herrold), Augustus ‘Gus’ Sackey (David Jonsson), Hari Dhar (Nabhaan Rizwan) being interviewed for a position in the coveted financial world and are asked what might appear stupid questions such as, “Can you tell us a joke?” or “Why are you here?”

These graduates come from different walks of life, Harper and Hari are from what might be considered ‘state’ (non fee-paying) schools while Augustus, is a posh gay black guy from Eton (subverting stereotypes).

We see the culture of rampant sexism, for instance, financial analyst Yasmin Kara-Hanani (Marisa Abela) has to always get the coffees and lunches, and generally be the skivvy, but she has her own approach to ensuring she can survive and thrive in this toxic atmosphere.

There is a randy trader, Kenny Kilbane (Conor MacNeill) who seems to think that he can do whatever he likes.

There are also tragedies as not everyone can cope with the high pressure without relying on medication, Red Bull, sex, drugs and other props.

When personal tragedies occur, then the company tries to implement some pastoral care.

The show delves into the culture of everyday sexism, racism and micro-aggressions, bullying and office banter “Why is there a ring in your nose – are you cattle?”

It’s a character driven show performed by an ensemble cast, set in a high pressure environment, and cognisant of the fact people still have to do real things like look for a place to live, have your mother to dinner and be embarrassed by her, and try and go out for a social evening too. It is a real insight into this world and a riveting watch.

Episodes 2, 3 and 6 are directed by Tinge Krishnan, Episodes 4, 5 and 8 by Ed Lilly and Episode 7 by Mary Nighy