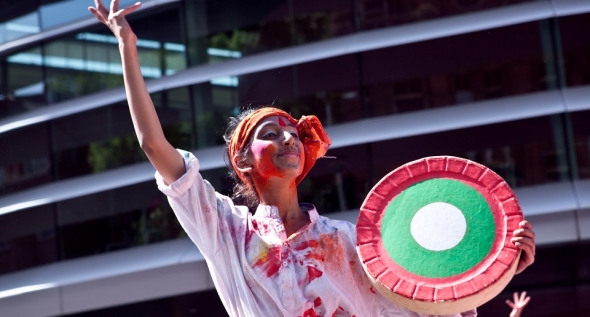 Whether it’s dance, discussion or caroms, this festival has it…

IF YOU’RE looking for an explosion of cultural creativity and the traditional with a twist (and a half), you should be looking at what to see at an Indian Summer, an arts festival held in Leicester.

Now in its fourth year, An Indian Summer has grown into a multi-faceted six-day celebration of Asian inspired arts and activities, covering films, talks, workshops, yoga, and music to name just a few of the attractions on offer.

Among the highlights is Terry Mardi’s Desi Circus, which brings together a number of different acts and performances under one tent (so to speak), and gets underway this weekend (from Saturday, June 28).

“It is just like a circus – not just performers or musicians and dancers, we’ve got puppet shows going on, comedy, there’s a whole host of things,” explained An Indian Summer festival director Bipin Anand to www.asianculturevulture.com

“One of the things I am most looking forward out of all this, is the Holi experience – where a dance group will be doing a dance and throwing around colours and then inviting people who are watching to get messy themselves – that’s going to be really interesting,” said Anand, no doubt relishing the spectacle. It takes place on both Saturday and Sunday from 3.30pm in Orton Square.

Another Indian Summer festival highlight will be a chance to quiz one of India’s top independent film producer’s Guneet Monga after a screening of the hit international Indian film, “The Lunchbox” later today (Wednesday, June 26). She should link up with the audience through a video feed.

Also showing is the award-winning “Ship of Thesus” and one of the best movies to have come out of India in recent times.

Hailed as a work representative of a new wave of Indian directors emerging onto the world stage, Anand Gandhi’s film has delighted critics and audiences alike. It screens on Friday at 7.30pm.

A particular festival highlight for Anand is the penultimate event on Sunday evening and is billed as “Tabla with a difference v4”.

“We have got two tabla players performing together in a duet and then linking up with another tabla performer in LA and that will be a mixed up with a spoken word artist and this is going to be our spectacular for this year,” enthused Anand. “It should be quite special.”

It takes place at the Phoenix cinema and begins at 4.30pm. It costs £5, but Anand says a vast majority of the events are free entry.

“We don’t exactly have a traditional centre stage, we have an area and people gather around in arc or a circle and see what’s going on, whether it’s theatre or a dance performance. You can pop in and out.”

He also said that the festival, which takes place in the town’s cultural quarter and focused around the Phoenix cinema and the Curve theatre has a special atmosphere.

“We’ve got a very unique bazaar, the atmosphere is something special. The street is shut down (to traffic) and you’ve got these rickshaws and carts and people are shouting things.”

An Indian Summer in Leicester

Anand, who runs a multi-media company in his home city, said the festival was started to give a boost to artists and promote the region’s strength in performing arts and provide a cultural focal point.

As well performances, there are workshops, exhibitions and discussions.

But the festival’s strength has grown with the artists it first developed.

For the first, Indian music producer and tabla player Mayur Navekar came from India to collaborate with local based artists.

“There are a lot more festivals in and around Leicester now and it’s amazing to be part of that,” he added. “British Asian artists are working with others – for example Rishii Chowdhury is one of our tabla players and he is doing yoga and tabla – I don’t know what that is about – and he has a got a group together, a rapper and a guitar player.

“Indian classical artists (in Britain) are finding their own way, they are not just hanging out with other Indians, they are collaborating with different artists.”

An Indian Summer is then one place to see and enjoy these developments and it’s hard not to feel there is something for everyone (as the cliché goes and Anand well appreciates).

“There are a couple of pages of activities for kids, some are outdoors, some are inside, some in the courtyard, we’ even got the national carom championships, we’ve tried to cater for all the different kind of audiences.”