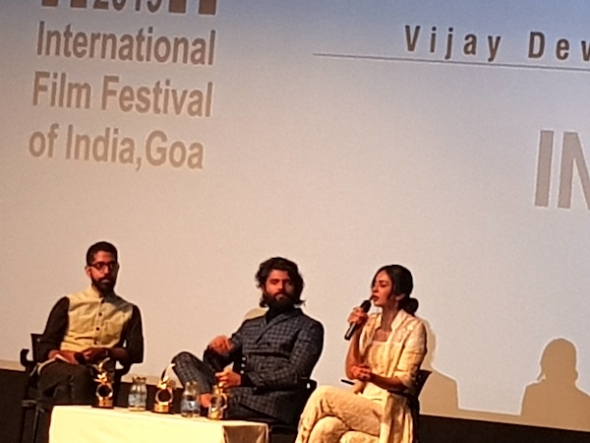 TWO CLOSING talks were the highlight of the bird’s day covering the International Film Festival of India (IFFI) in its golden anniversary edition and commonly referred to here as IFFI50.

The festival ends today with the grand closing ceremony, where the major awards will be announced (follow in real-time on Twitter) and the closing film in the evening, ‘Marghe and her mother’ an Italian language film by Iranian director Maysam Makhmalbaf.

In a session billed as Young Trendsetters, the two young stars – Rakul Preet Singh and Vijay Devarakondara were the subject of much attention as they walked the red carpet and then discussed their respective careers with journalist and moderator, Sudhir Srinivasan, yesterday (November 27).

Devarakondara clearly is an icon of sorts already – many lauded his performance in ‘Arjun Reddy’ – a Telugu language film which was then made into a Bollywood film – ‘Kabir Singh’. Whatever you think about those films, Devarakondara is popular with both young women and men, as evidenced yesterday. Some have called out both for depicting toxic masculinity. He has also done ‘Dear Comrade’ and ‘Geetha Govindam’ (in his native Telugu) and are just two other films he mentioned in his talk. He has also done Tamil language films and spoke about how he focused on learning the language before talking on a role.

Rakul Preet Singh is probably best known to those who follow Bollywood from ‘De De Pyar De’, alongside Ajay Devgn. She first made her name in Telugu and Tamil films and has also made Kannada language films. She said spirituality helps to keep her grounded and she tries to lead a normal a life as possible, meeting friends, hanging in coffee shops and managing her work in film sets like a to 9-5 job.

Earlier in the same auditorium, there was near mayhem as one of the most enduring stars of Indian film music took to the stage, Ilaiyaraaja. He had his band on stage. He has composed 100 of scores for films and some would see him as a greater figure than AR Rahman, himself a music composer of Tamil origin as well. In an amazing section, the composer devised a score for a film in which a man is about to murder his father – the exercise was suggested by moderator, friend and film director, R. Balki. Ilaiyaraaja devised the score on the spot within the allotted five minutes or so of time. It was powerful and had echoes of lullaby… Ilaiyaraaja explained. Amazing.

One of Bollywood’s best known choreographers turned directors – Farah Khan also talked about her career and the transitions she had made from failed dancer to Bollywood hit director. She talked her role in the stage production of ‘Bombay Dreams‘ and living in London for four months.

Seen our videos from IFFI50 and Film Bazaar?

Privacy & Cookies: This site uses cookies. By continuing to use this website, you agree to their use.
To find out more, including how to control cookies, see here: Cookie Policy
← Mena Massoud, Disney’s ‘Aladdin’ tells acv he “hopes the film becomes a symbol of success for all ethnicities” The future is brown…(watch video)
‘The Rite of Spring’ – classical ballet gets bharatanatyam treatment as Seeta Patel goes East and West with radical intent… →