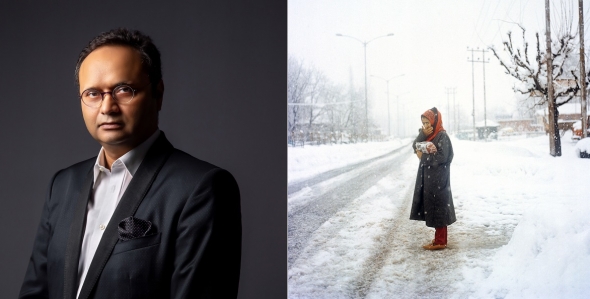 BUSINESSMAN and art collector Durjoy Rahman is on a mission to support and promote the work of South Asian artists and wants to help them get a platform into Europe and the wider international arena.

He believes art can bring about positive social change and a greater level of historical awareness – through art – can help to further understanding.

He set up the Durjoy Bangladesh Foundation (DBF) in 2018 in both Berlin and Bangladesh and an exhibition at the University of Cambridge called ‘Homelands: Art from Bangladesh, India and Pakistan’ mounted with help from the Foundation, runs until February 2.

This Saturday (January 18) sees many of the exhibiting artists come together to share their experiences in a series of talks and discussions at Cambridge University’s Kettle Yard Gallery Symposium – ‘Homelands: Art, conflict and displacement in Bangladesh, India and Pakistan’ and DBF is sponsoring it.

For the Bangladeshi textile entrepreneur, the symposium has a strongly personal element. as well as fitting in with his philosophical beliefs expressed through the work of DBF.

He told www.asianculturevulture.com: “I started this project because it is about displacement and migration stories and the challenges of 1947 and 1971.

“I feel I have a story to tell and it goes with my personal interest. I am a son of a migrant father, who migrated from India and came to East Pakistan which is now, Bangladesh after the 1947 Partition.

“I have heard many of his childhood stories which he used to tell us (when he was in Bardhaman district, West Bengal in India), but I never had the opportunity to visit my ancestral home where famous poet, Kazi Nazrul Islam (considered National poet of Bangladesh) was born.”

Using photography, sculpture, painting, performance and film, the exhibition explores the notions of home, migration and resettlement, in South Asia. It is a region that has experienced Colonialism, the impact of the Partitions of both India in 1947 and Pakistan, in 1971 and creation of Bangladesh (from what used to be East Pakistan) and other contemporary migration in South Asia (from that region to the West).

For the Bangladeshi textile entrepreneur, the symposium has a strongly personal element. as well as fitting in with his philosophical beliefs expressed through the work of DBF.

He told www.asianculturevulture.com: “I started this project because it is about displacement and migration stories and the challenges of 1947 and 1971.

“I have heard many of his childhood stories which he used to tell us (when he was in Bardhaman district, West Bengal in India), but I never had the opportunity to visit my ancestral home where famous poet, Kazi Nazrul Islam (considered National poet of Bangladesh) was born.”

“My father married my mother who was a medical student. My mother also witnessed the riots that happened after the British left, so these are the stories I listened to and experienced from my parents when I was growing up.

“I was born before 1971(when Bangladesh was created), so as a nation, we know that independence has given the region an identity.

“After Bangladesh was created, I met many freedom fighters, so the content of this exhibition is very much what we grew up with.”

He wants the Symposium to create awareness around the ideas of home, displacement, and discuss the big issues of the day such as refugees from Myanmar in Bangladesh and even – the impact of Brexit on migration patterns.

Rahman responds to things emotionally, and it is no accident that his Foundation is in Berlin, because as a city it had a wall that partitioned East and West Berlin and these symbols echo his own story. After the Second World War, East Berlin became part of East Germany as Germany was split between, 1945-1990.

His own involvement in the art sector began purely by accident: “I am a trader, we deal in textiles, Bangladesh is a prominent textile hub and, I buy things from Bangladesh and sell to North America. I started travelling to different parts of the world and I saw how art influenced the fashion business, so I started collecting art on a small scale.”

He began collecting in 1997 and over 20 years later, argues that you cannot think that art is an investment, or that art will increase in value, like other commodities.

“It’s all about liking, it’s all about the love of art that was the biggest inspiration for me to start collecting. I was attracted to it.

“I still don’t consider art as a monetary tool, or investment tool, but if you pay attention when you are procuring something and if your judgement is right, it is going to increase in value or its reputation. It’s just an automatic process.”

He initially began by collecting work of artists from Bangladesh and his own choice fell on Rafiqun Nobi (known as ‘Ronobi’), a painter and cartoonist, who created the Tokai cartoons for a newspaper. Tokai is a street urchin and commentator and considered to be the longest surviving cartoon character created in the part of the world.

Another of his favourites is Shahabuddin Ahmed who was a freedom fighter and fought in the Liberation War (1971) and his work has a unique style.

The pair are senior artists and they are not exhibiting in ‘Homelands’, but two emerging Bangladeshi artists who are exhibiting are Yasmin Jahan Nupur and Munem Wasif.

Rahman points out that he doesn’t collect their work. “I am not a collector of all the work I support.”

DBF has already been responsible for a solid body of work – among the artists it supported is Mithu Sen.

She was able to contribute to the ‘Facing India’ exhibition which highlighted six women artists from that country. The piece, ‘MOU‘ (‘Museum of Unbelongings’) was the first time a public institution in Germany had collected a piece by a female contemporary artist from South Asia.

Another artist he has supported is Serge Attukwei Clottey from Ghana whose work was displayed at ‘Stormy Weather’ exhibition (July 12-October 13 2019) at the museum in Arnhem, Holland.

“Every art work tells a story and where I can connect my own history it is an emotional link,” he explained to acv.

“Clottey uses plastic jerry water cans (in his artwork) and watering cans are also a common scene in Bangladesh. At one moment he is saving plastic from going into landfill and at another he’s talking about social justice and climate change.”

DBF is also looking at migration both from East to West and into Bangladesh itself.

It participated in the first of what is to be an annual residency project last year.

The Majhi International Arts Residency at the Venice Biennale brought together migrant artists and those from the local community who collaborated with 11 international resident artists (some from Bangladesh) on the question ‘Does life in these uncertain times of crisis and turmoil make art more interesting?’ – which in turn fed into the central theme created by Ralph Rugoff, curator of the 58th La Biennale di Venezia – ‘May you live in interesting times’. The work of the artists was on public display as part of the Venice Biennale from August 4-11 last year.