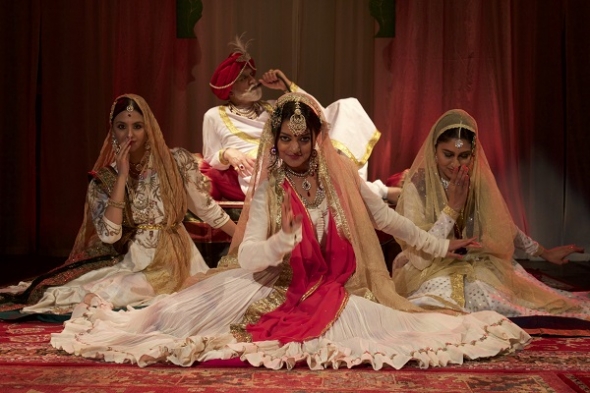 A LIVELY mix of traditional drama, with some dance and multi-media effects, the play ‘Gauhar Jaan – The Datia Incident’ genuinely offers theatregoers something different.

Currently in its final week now at Clapham Omnibus Theatre, a gem of a venue, tucked behind bustling Clapham High Street, and nestling in the conurbation’s attractive old town, the converted library gives add pizzazz to a production that has a real sense of time and place.

There is also an interesting exhibition in the Omnibus bar and reception area devoted to the real Gauhar Jaan.

Sometimes referred to as India’s first star or celebrity, she was a singer of immense power and repute and her lustre even reached the west with American Fred Gaisberg in India in 1902, looking to capture the sounds and thrills of India for posterity.

The play is based on Gauhar Jaan and her friendship with the Maharajah of Datia?

This would appear to be fiction, but Jaan did spend a lot of her real life in royal courts near Kolkata, in Varanasi and Mysuru (Mysore) and was known for her independence and strong views.

Lest to say this all makes for great drama.

The character of Gauhar Jaan is reprised by Sheetal Kapoor, who does Jaan’s haughtiness and self-possessiveness well, and is quite the foil for the grey-haired and rather louche (marijuana pipe enthusiast) Maharajah Bhawni Bhadur, played by Harmage Singh Kalirai.

The scenes with these two are among the most vivid, but there is also great intensity between the Maharajah and his faithful consul, Bakshi Saheb (Devesh Kishore), whose one longish soliloquy, mid-play, is personally testing and well-handled.

In some ways, Jaan is a prisoner of her own talents. The Maharajah wants her to himself, in musical terms – at least that much is certain.

The play is ambiguous as to whether the two enjoyed anything more than a friendship, but there is a passion lurking there even though our Maharajah is easily diverted.

Indeed, the dancers would normally take his eye… and you know how it is with these Maharajahs and their consorts.

In the background and slightly less neatly woven into the structure of the drama is Gaisberg’s (Jordon Kemp) search for Jaan.

Having arrived in Mumbai and unable to locate her via social media – it is 1902 – remember, Gaisberg meets an assortment of contacts who don’t really get him very far, but there is an element of suspense and comedy which combine well – though these scenes with Kemp and Jas Steven Singh, who plays a range of characters, do not flow as they might.

Having said that, the ethos, the diverse elements of music, dance and film at the end, make for a strong overall production with a good deal to recommend it.

The play offers us some insight (and much entertainment) into another world and its glories and foibles – and puts the arts and aesthetics of that time centre stage in an imaginative and stimulating way and credit for that must go to director Mukul Ahmed and his company, Ghetto Tigers.