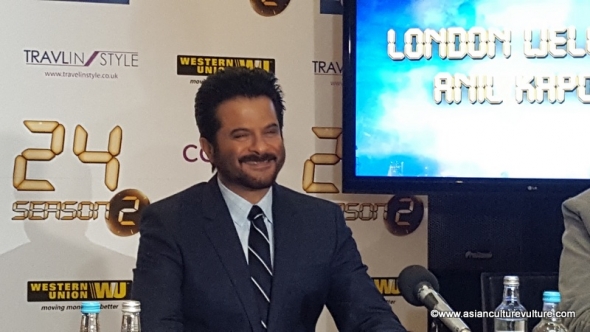 BOLLYWOOD star Anil Kapoor is on a short visit to the UK to promote the launch of the second series of “24”.
Adapted from the original US TV series “24” with Kiefer Sutherland, the Indian version has proved a big hit and is broadcast on Colors TV in the UK.
Both the first series and the second are being broadcast in the UK presently.
Kapoor was with Raj Nayak, CEO of Colors and Rishtey (another channel available in the UK) and Viacom 18 and Anuj Gandhi, Group CEO of India Cast, a joint venture between Viacom and TV18.
British actor Ameet Chana (pictured first) was the compere yesterday. Nayak is not in these pictures as to the far left, see twitter 😉
More on Anil Kapoor and Indian TV soon!

To view pictures as slide or close up, click on image and use arrows to go left or right, to close click on x in top right. To see captions, place cursor over picture and read…Enjoy! See more on ACV FB…click f tab on page…and like! Thanks.