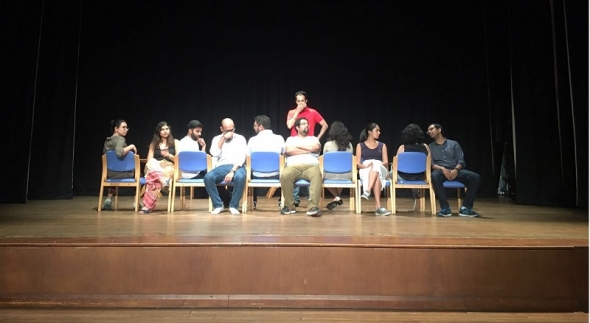 Ever wanted to put your own work on stage and take complete control for it? Here’s Herschel Pant who has done just that as he puts on his debut ‘Beyond Singularity’ which has a three-night run in London from Friday (July 21)…

www.asianculturevulture.com (ACV): What made you want to write a play in the first place?

Herschel Pant (HP): It started around February last year when my dad was over and we were driving past the Rudolph Steiner House (where I’ve acted in various performances in the past). He asked and encouraged me to write something fresh and new, which I had wanted to do for a few years now – but like all good intentions – I never quite got around to doing it.
So during the 40-minute car journey from there to my flat was when the context of the play was born. The content took about nine months to write, research and re-write to fit. I wanted to make the audience think about not only some of the challenges we face in society today but in the future as well. The story revolves around Rahul – who is doing his Ph.D on a very new and exciting topic in 2015 but his parents are trying to get him married. How this dilemma evolves is the story of the play.

www.asianculturevulture.com: What made you want to do it this way by yourself and was there a sense of urgency, a conventional route of working with a theatre group can take time?

HP: The date of opening night had to be July 21 – which is my dad’s 70th birthday. Given how it all started, it only was befitting that its done then. Once that was done, it was a question of finding a good director to work with (I’ve worked and known Ali Tariq Khan for a very long time) and then hold auditions to fit the 13-character play. I had worked with Aks Arts in the past and they were a great help in putting this together as well. I don’t think therefore I can claim that I’ve done this by myself in the least. There are at least another 10-20 people, apart from the cast, who have been key in putting this show on – from IT support, to design work, to music to production. The list is long and this is without thanking all those people that have bought the tickets to come see the shows!

ACV: How did you go about finding the actors and is this all your money going into it?

HP: Actors got recruited through an auditions process in the early part of this year, where I reached out to anyone and everyone who wanted to act. It took a month or so and about three rounds of auditions but we have got a wonderful team of actors together. It is not strictly professional in that I am not paying the actors – but all the ticket revenue is being invested in the production.
In fact, barring a couple, majority of the cast are not full time actors but just have a passion to perform – which really ties in with how this entire story came together. It was a just an idea in February 2016, just a script around December 2016 and now it is about to be performed in London with a sell-out show on Friday…

More about Herschel Pant: He got his first name – a version of the Indian ‘Harshal’ (or varied spellings) meaning ‘harsh pradan karna’, (‘give happiness to others’) from his dad, a physics professor who liked the famous physicist William Herschel and his mum liked the name. Pant came to India to study at the LSE when he was 17 and continues to work in finance.

Privacy & Cookies: This site uses cookies. By continuing to use this website, you agree to their use.
To find out more, including how to control cookies, see here: Cookie Policy
← Zeenat Aman, Bollywood star rebel, Shabana Azmi and ‘Sholay’ legend director to hit UK Asian Film Festival (March 27- April 7) and support theme of revolution
Southbank Centre tells acv there will be no South Asian-themed arts festival this year after nine years of Alchemy →